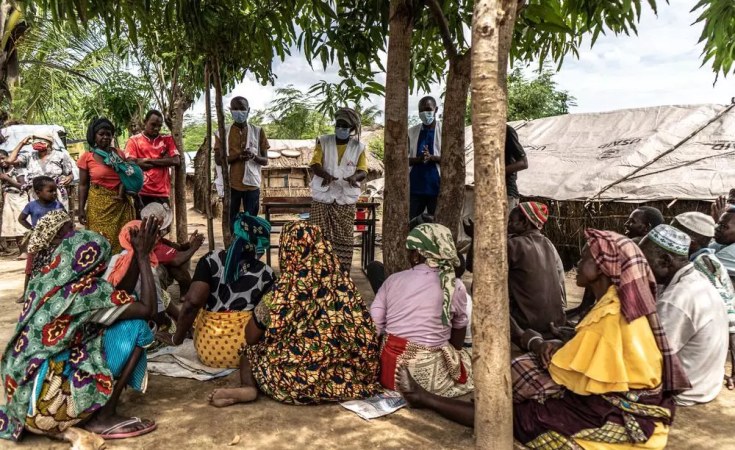 Since October 2017, the northern province of Mozambique, Cabo Delgado has been suffering violent attacks from a Non-State Armed Group. Over 2020, these attacks grew in strength and brutality – leaving a tremendous psychological impact on communities. The recent attacks in Palma are illustrative of the violence that the people have been exposed to during the conflict in Cabo Delgado, which has been increasing in intensity and spreading over the last year.

In Palma, as in many previous attacks, violence-hit members of the community, including women and children, and thousands of people were forced to flee for their lives while others remained trapped in the settlements nearby the Afungi gas compound (Quitonda and Maganja). Those who have returned to Palma city continue to face insecurity.

“An armed conflict is raging in Northern Mozambique.  Homes, health centres and schools have been destroyed, says Brice de la Vingne, Doctors Without Borders (MSF) Emergency Pool Co-ordinator. “The latest attack to take place in Palma has displaced thousands without warning.  They fled into the bush, walking days on foot to safety – some still in hiding. Others fled by boat, further south down the coast."

The UN estimates that nearly 700,000 people have already been displaced and are in dire need of humanitarian assistance. While the needs are growing exponentially, ongoing insecurity and bureaucratic constraints continue to hinder international organisations capacity to scale up much needed humanitarian aid.

Most internally displaced people stay in homes of family and friends. This is adding pressure to many villages and towns in Cabo Delgado. While humanitarian assistance is largely targeting Internally Displaced People in temporary resettlement camps, host communities that offer shelter to displaced families struggle to meet their basic needs, including food, water, sanitation, protection, and healthcare, and they often live in precarious, overcrowded and unhygienic conditions that create the perfect environment for the spread of diseases.

Internally Displaced People seeking shelter in the reallocation sites have often to wait for weeks in transit areas until they are allocated a space. The growing demand for assistance has outpaced the capacity of local government services and civil society organisations in Cabo Delgado. It is crucial to urgently scale up the provision of aid.

“Most of the displaced people that arrive are coming to host families. The government is trying to allocate them, following a different concept which is that they receive a piece land,” says Aitor Zabalgogeazkoa, MSF emergency coordinator in the Montepuez region.

On the other hand, critical national health programmes have been disrupted threatening the life and the medical condition of thousands. HIV, TB, malaria, antenatal and routine and cholera vaccinations have been affected.

We have been working in Mozambique since 1984. For more than 30 years, our teams have been responding to health and humanitarian emergencies countrywide.  In Cabo Delgado, we continue to fill gaps in healthcare and respond to emergencies in both the host population and the growing displaced communities, often in collaboration with health authorities and other partners.

Today our MSF teams are working in Metuge, Montepuez, Nangade, Mueda and Macomia with temporary activities in Namuno, Balama, Ancuabe, Meluco and Pemba. We provide healthcare, including mental health, to the people displaced by the conflict and to the host communities by supporting health centres and cholera treatment centres and by running mobile clinics. We have also distributed Non-Food Items (such as plastic sheets for shelter, mosquito nets, hygienic sets, cooking sets and tools for farming) for people living in temporary settlements who have escaped from their villages with nothing but their clothes.

While we have expanded our capacity over the last months, our presence is still limited and only addresses a fraction of the needs. There is an urgent need to scale up the overall response in Cabo Delgado.