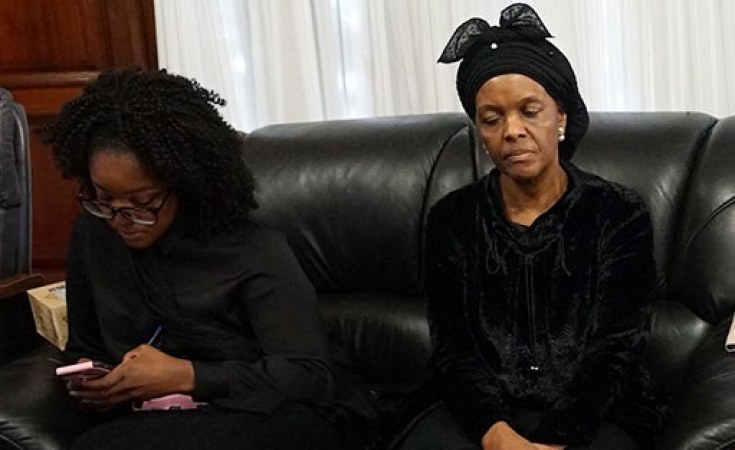 A Kutama villager in late former President Robert Mugabe's Zvimba home has taken former First Lady Grace Mugabe to a traditional court over her decision to bury her husband in his rural mansion's courtyard.

Enos Monongovere challenged Mugabe's widow on 29 April and wants her to appear before Chief Zvimba's traditional court over what he claims was 'mapini' (taboo).

Manongovere is demanding that the late former leader's remains be exhumed and re-buried at a known gravesite for the family in Kutama village.

He also wants to have the late leader's belongings shared among relatives as per the known Shona custom within the clan.

Mugabe, who ruled Zimbabwe for 37 years before his inglorious exit following a military assisted coup November 2017, died aged 95 in a Singaporean hospital from prostate cancer.

During the period post his exit, a sulking Mugabe was said to have refused to be interred at the National Heroes Acre after his demise.

Attempts by the Emmerson Mnangagwa led administration to have the country's founding leader interred at the national shrine where a mausoleum was being built for him were in vain as Grace remained adamant on her husband being buried in his rural home.

Fast forward to April 2021, the decision could be backfiring for the late leader's widow who now has to put up a defence against burying her husband in his rural home.

Grace Mugabe faces a penalty of five cattle and a goat to be paid to Chief Zvimba after the hearing slated for 20 May, 2021 according to the traditional court papers.

According to the summons, the court hearing will go ahead on the mentioned date even if Grace, who is said to be outside the country fails to turn up on the day.

Part of the summons read, "You are being called to Chief Zvimba's traditional Court on 20 May, 2021 at Gonzo Guzha Hall, Murombedzi Growth Centre.

"Charges are that you buried your late husband former President Robert Mugabe in his house and according to our culture, this is taboo.

"You are therefore being ordered to surrender all his belongings to his clan as per traditional ethos and values of the clan and re-bury the man according to Zvimba culture.

"You can bring your witnesses but be informed that if you fail to attend the hearing, judgement will be passed in your absence."

Commenting on the development, outspoken journalist Hopewell Chin'ono called on Zimbabwean authorities to allow Mugabe to "Rest in Peace" and respect the late leader's wishes.

In a twit, Chin'ono wrote, "Someone is determined to put their hands on Mugabe's body! This is the first time l side with Grace Mugabe.

"When a man gives instructions to his wife about how he wants to be buried, the living should respect his wishes. Let the old git Rest in Peace. He is gone for goodness sake! Society should resist this attempt to use body yemudhara uyu!".

If indeed Grace loses the case and Mugabe is reburied elsewhere, this could come as some form of victory to President Mnangagwa who was humiliated by his late predecessor's family which defied the incumbent's directives for his burial at the national shrine.

Critics say Mnangagwa has a big handle on the outcome of court decisions, let alone traditional ones run by traditional chiefs who live off government's benevolent handouts.

Zimbabwe Says Farewell to Mugabe at State Funeral
Tagged:
Copyright © 2021 New Zimbabwe. All rights reserved. Distributed by AllAfrica Global Media (allAfrica.com). To contact the copyright holder directly for corrections — or for permission to republish or make other authorized use of this material, click here.