In the aftermath of a North Gauteng High Court finding, judges Willie Seriti and Hendrick Musi will now have to explain why the Arms Procurement Commission overlooked crucial information prior to making findings in 2016 that the arms deal was clean as a whistle.

On 7 May, Sello Chiloane, secretary of the Judicial Conduct Committee, informed the NGOs, Shadow World Investigations and Open Secrets, that their complaint against Seriti and Musi had been referred by JCC Acting Chair, Deputy Chief Justice Raymond Zondo, for investigation.

Seriti, a Supreme Court of Appeal judge, and Musi, former Judge President of the Free State High Court, chaired the Arms Procurement Commission, known as the Seriti Commission, for four years at a cost of R130-million.

During that period two shipping containers left at the Hawks premises in Pretoria, containing an eye-watering 4.7 million computer pages and 460 boxes of evidence, remained untouched.

Neither former president Jacob Zuma nor French arms company Thales - who are both, after almost two decades of legal stalling, about to face charges of fraud and corruption related to the arms deal - were called by Seriti.

The decision by the JSC to probe the judges is another victory for... 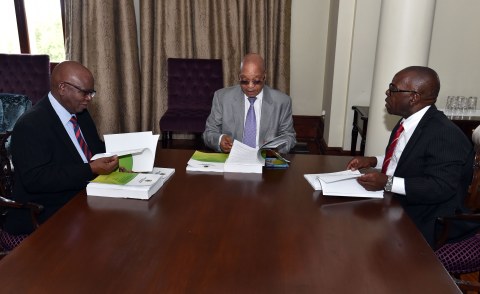 Zuma Seeks Removal of Prosecutor from South African Graft Trial
Tagged:
Copyright © 2021 Daily Maverick. All rights reserved. Distributed by AllAfrica Global Media (allAfrica.com). To contact the copyright holder directly for corrections — or for permission to republish or make other authorized use of this material, click here.