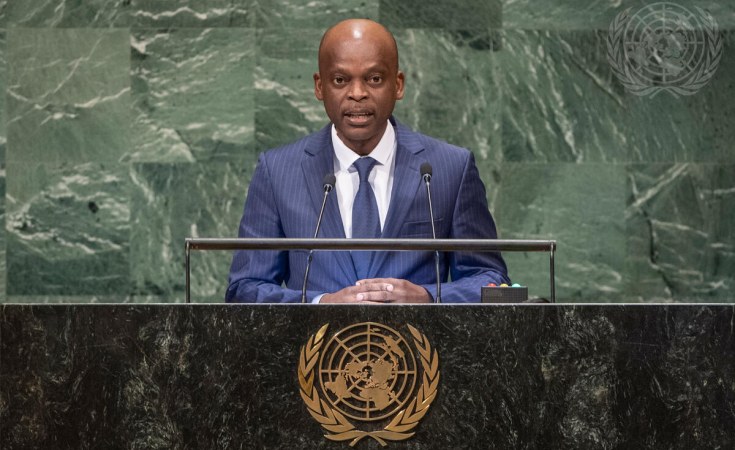 The new EU-OACPS Partnership Agreement is only a few weeks old, but already many in Africa are calling for an update. What are the reasons for the dissatisfaction?

International treaties are complicated enough when they are negotiated between two or three states. They become even more complex when 106 countries at once try to defend their individual interests and power claims and regulate them in a legally binding way.

It is therefore hardly surprising that the negotiations on a new basic agreement between the 27 European Union (EU) member states and the 79 countries of the Organization of African, Caribbean, and Pacific States (OACPS, formerly ACP) dragged on for more than three years before a breakthrough was finally announced in mid-April. Inevitably, not everyone affected by the deal -- dubbed "Cotonou 2.0" or "post-Cotonou" in reference to the previous agreement --, was happy with the results.

Resentment seems to be running especially high in sub-Saharan Africa, the most important of the three OACPS regions for the EU. OACPS negotiator and foreign minister of Togo, Robert Dussey, told DW that things could have turned out better if Africans had shown more solidarity. "We did not agree among ourselves. But the EU knew very well what it wanted."

It is not so much the issue of human rights, on which reportedly there were many disagreements during the negotiations -- for example, regarding questions of sexual orientation -- that is now causing dissatisfaction. African business representatives and observers detected a much more fundamental problem. Although the deal has not even been ratified yet, they consider it to be partially outdated already.

Even the deal's format is out of date, says John Maré, former deputy South African ambassador to the EU and a specialist in EU-Africa relations. "The needs of the small island developing states, the Caribbean and the South Pacific, are quite different to continental Africa, where you're looking at big countries like DR Congo, for example. So there are definitely different interest areas," Maré told DW.

Unlike in the Cotonou Agreement of 2000, the new deal includes a so-called "three-plus-one structure" intended to take into greater account the individual needs of the three partner regions. But Maré is skeptical: "We hope that that will happen, but sometimes the devil is in the details."

Maré is pleased that the new agreement explicitly states that signatories will prioritize climate change, the environment, and sustainable developmentin future cooperation. This way, the European Green New Deal, the EU's multi-billion investment program for a sustainable transformation of the economy, can also present an opportunity to Africa. The EU-Africa Green Investment Forum of the European Investment Bank, which took place in Lisbon at the end of April, shows that the EU is committed to what it says, Maré added.

Ghanaian business consultant Michael Kottoh also believes that the agreement sets the right priorities in economic relations. "I think there will be new business and investment opportunities in the areas of the green economy and the digital economy," Kottoh told DW. It is still unclear how exactly African companies will be able to take advantage of these new opportunities. Rapid clarification is of utmost importance, Kottoh said.

Despite hope for possible new investments from Europe, African entrepreneurs and politicians are primarily concerned with one question: what does the post-Cotonou agreement mean for the AfCFTA intra-African free trade agreement currently being implemented on the continent?

While the AfCFTA aims to enable free trade across the whole continent -- including North Africa -- analogous to the European single market, Cotonou 2.0 merely regulates the framework conditions for trade between the EU and sub-Saharan Africa. This creates a potential "minefield of problems," notes South African ex-diplomat John Maré. Possible trade barriers between states in North and Sub-Saharan Africa that want to trade with the EU at the same time is just one example.

For Michael Kottoh, the deal with the EU is a missed opportunity. "It would have been wonderful to build more synergies between the two frameworks. But I do not see a lot of mention of the AfCFTA in the post-Cotonou Agreement," Kottoh says.

He hopes that all parties will adjust the new basic agreement accordingly. Otherwise, the EU could also end up losing out. "The AfCFTA will become a new geopolitical force within the continent and eventually on the world stage. Unless the EU itself pays attention to this important geopolitical shift, I think that various EU-Africa treaties are going to be less relevant to Africa."

The Africa Association of German Business sees this danger and recognizes the risk of irrelevancy. In a press release, Chief Executive Christoph Kannengießer said that it was a mistake not to have pursued the vision of a continent-to-continent treaty between the EU and the African Union (AU). "The real goal should be to enter into negotiations on a free trade area between the EU and the AU." He added that he hoped that the post-Cotonou agreement for Africa would be an interim solution.

The next EU-AU summit will be a litmus test for Brussels, and the EU Commissioner for International Partnerships Jutta Urpilainen. It will reveal whether the European bloc is prepared to take criticism from the African business community seriously. The meeting was postponed last year due to the coronavirus pandemic. It is long overdue and, according to experts, may turn out to be trendsetting. However, no new date for the summit has been announced yet.