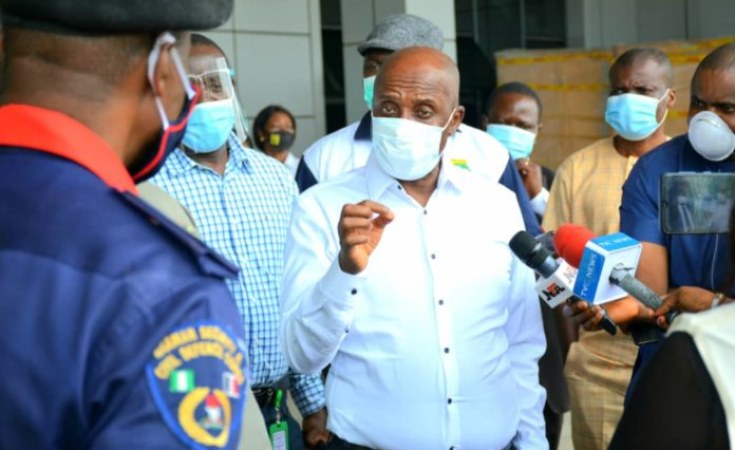 Lagos, Katsina — Minister of Transportation, Hon. Rotimi Amaechi, has made a u-turn as the panel of enquiry he set up by to investigate the alleged shortfall in operating surpluses by the Nigerian Ports Authority (NPA) under the leadership of the suspended MD/CEO, Ms. Hadiza Bala-Usman, will now probe her for insubordination as against the earlier claim of not remitting operating surplus of N165 billion to the consolidated revenue fund account (CFR), THISDAY has learnt.

This comes as the youths in Katsina State under the auspices of Katsina Youth for Sustainable Change, called on President Muhammadu Buhari to disband the 11-man investigative panel inaugurated by Amaechi to probe Bala-Usman.

A member of the administrative panel told TheCable yesterday that the focus would now be "insubordination."

He said: "We are looking at two things. One, the suspended managing director was in the habit of communicating directly with the president and bypassing the honourable minister. This is gross indiscipline and a breach of public service communication line. That is enough to get her sacked.

"Two, the minister directed her to restore all Intels' contracts that were suspended or terminated. What she didn't know was that the president was in the know of it. She failed to comply. This is insubordination and she is not above discipline."

But a source at the transport ministry told THISDAY yesterday that Buhari actually withdrew his approval for the reinstatement of Intels' contract after Bala-Usman wrote to President's Chief of Staff, Prof. Ibrahim Gambari, to explain NPA's position.

Gambari, the source said, forwarded her response to the Attorney-General of the Federation (AGF), Mr. Abubakar Malami (SAN), for a legal opinion.

The source said Malami wrote to the president to state that the NPA was right and that no contracts were terminated or violated.

Buhari then withdrew his approval for the reinstatement of Intels' contract and that was believed to have infuriated Amaechi, who accused Usman of insubordination.

According to the source, "If you look at the terms of reference properly, we are to examine and investigate compliance with the communication channel as obtained in the public service. Insubordination is not a small offence."

The panel member accused her of bypassing the minister and dealing directly with the president despite a "clear reporting hierarchy."

Asked about the N165 billion non-remittance claim, the member said: "Available evidence shows that the allegation may not be true... it is a matter of reconciliation of what the Budget Office thought should be the remittances with what the actual remittances should be.

"Since audits have been done over the years, there is obviously nothing more to that. It is not as if NPA's monies are in private banks. Everything is with the CBN, so if there were no remittances, it is just about looking at NPA's accounts with the CBN."

Although the minister asked the eleven-member panel to "examine and investigate the procurement of contracts from 2016 to date" as part of the terms of reference, another source at the NPA said it was going to be a "tricky job."

"At NPA, any contract beyond N50 million for goods and services and N200 million for works are referred to the ministerial tenders board (MTB), which is headed by the permanent secretary of the ministry," he said.

"If we go into probing contracts since 2016, we may end up probing the minister himself. About 70 per cent of the contracts for capital projects go to the MTB, after which the minister presents them to the federal executive council (FEC), presided over by the president himself, for approval. We will check if all the procedures were followed, but I am personally not optimistic about that. The suspended MD, from indications, is a process person."

Amaechi, who is one of the very few ministers with direct access to Buhari since 2015, has denied allegations that he was fighting a personal war with Usman, whom he nominated for the position in 2016 after working with her in the APC Presidential Campaign Council.

THISDAY had exclusively reported that the "cold war" between the duo was a result of the renewal of $1.5 billion channel management contracts in which the minister is said to have gone against a competitive bidding process in favour of companies nominated by him.

The Permanent Secretary of Ministry of Transportation, Dr. Magdalene Ajani, has in a paid advertisement, denied the allegation against Amaechi, insisting that he did not at any time seek to bypass the process.

Meanwhile, the youths in Katsina State under the auspices of Katsina Youth for Sustainable Change, have called on Buhari to disband the 11-man investigative panel inaugurated by Amaechi.

They described the investigative panel as Kangaroo board of inquiry singlehandedly picked by Amaechi "from his cronies in order to unjustly nail his victim (Bala-Usman)."

The Katsina youths equally condemned the suspension of Bala-Usman, describing it as unlawful, illegal and unconstitutional.

The youths, through their counsel, Mr. EO Obunadike, at a press conference in Katsina yesterday, said the NPA boss was suspended from office without constitutional rights to fair hearing as enshrined in Section 36 of the 1999 Constitution as altered.

Obunadike said the suspension of Bala-Usman contravened the Approved Disciplinary Procedure Against Chief Executive Officers of Federal Government Parastatals, Agencies and Departments approved by President Buhari on May 2020.

He said: "From the information available in the public space, at no time was Hadiza Bala-Usman queried or invited to provide explanations for any discrepancies that may have been allegedly noticed in the operations of the NPA before she was suspended from office.

"Media reports indicate that the Minister of Transportation, Hon. Chibuike Rotimi Amaechi, relying on some unsubstantiated information from the budget office about some alleged non-remittance and without recourse to hearing from the MD of the Nigerian Ports Authority, surreptitiously wrote and complained to the president to get the managing director suspended."

He added: "From these entire facts made available to us, we humbly submit that the minister's action is unconstitutional, illegal and runs contrary to right to a fair hearing and at the same time, in sharp conflict with the approved disciplinary procedure against chief executive officers of the federal government parastatals, agencies and departments."

According to him, the constitution of the investigative panel by Amaechi against the suspended managing director of NPA runs contrary to the principles of fair hearing as contained in the constitution of Nigeria, and violates democratic norms and practices.

He urged Buhari and Malami to immediately intervene in what he termed the flagrant breach of the fundamental rights of Bala-Usman.