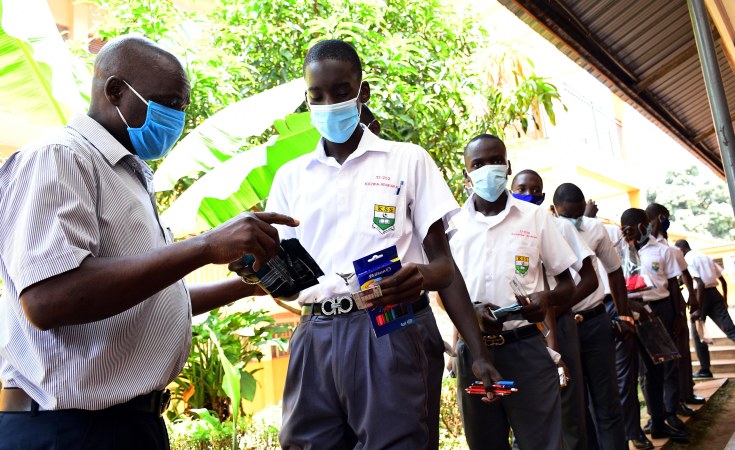 David Lubowa/ The Monitor
Invigilators check students at Kibuli Secondary School in Kampala, Uganda, before their examinations on March 1, 2021.
The Monitor (Kampala)
By Anthony Wesaka

The Constitutional Court has in a landmark judgment, ordered government through the Uganda National Examinations Board (Uneb) to refrain from organising national examinations on gazetted Muslim religious days of Idd-ul-Fitr and Idd al-Adhuha.

In a unanimous decision rendered on Tuesday, five justices of the court held that government has been infringing on the rights of Muslim students.

"I would issue a permanent injunction to order the first respondent (Uneb) to refrain from conducting examinations on any day coinciding with any of the relevant Muslim religious holidays to which Idd-ul-Fitr and Idd al-Adhuha," ruled Justice Elizabeth Musoke, who wrote the lead judgment.

Adding: "The practice of the first respondent (Uneb), in organising examinations for students under its mandate to be written on any day coinciding with any of the relevant Muslim religious holidays is inconsistent of the right to freedom of religion of Muslim students in particular the right to manifest their practice of religion through observance of religious holidays guaranteed under the Constitution."

Justice Musoke ruled that going forward, examinations should be postponed.

Justice Muzamiru Kibeedi, one of the other five justices, said the two religious days are designated in the Public Holidays Act to be observed and kept as public holidays, and that there should be no lawful justification for not honouring them.

Core to the students' complaint was that the acts of Uneb in organising national examinations to be written on days coinciding with Idd-ul-Fitr and Idd al-Adhuha, which are Muslim religious holidays were inconsistent with several provisions of the Constitution such as 7, 20, 21 (1), (2),( 3), 24, 29, 37, 43 and 44.

Mr Mandy had been accused of having in 2013, declared that the national examinations would be conducted on Idd al-Adhuha.

The judgment of the court came merely one day for the Muslim community to celebrate this year's Idd-ul-Fitr.

The justices awarded costs of the petition to the duo petitioners but declined to award them damages on account that they did not adduce evidence to show that they suffered any unique inconvenience due to the acts of Uneb.

June 12 Is Not a Date, It Is History for Nigeria
Energy