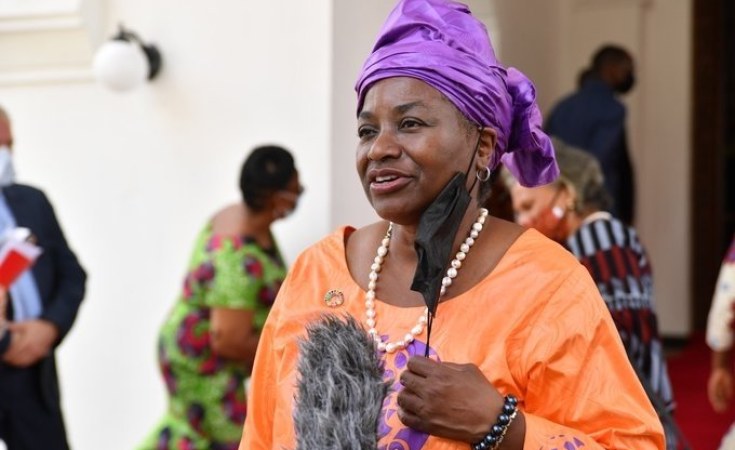 Dar ed Salaam — It was 3 o'clock on a Friday afternoon when Grace*, a counsellor at the National Child Helpline in Tanzania, received a call from a concerned teacher in Msalala, Shinyanga Region. One of her brightest students, Eliza*, aged 13 and in standard five, had not turned up for school that day, and she had heard worrying rumours that Eliza's parents intended to marry her. She had also learned that they had accepted a bride dowry payment from the groom's family in their village. The man who had been chosen for Eliza was 35 years old.

Stopping violence before it starts

UNFPA's Executive Director, Dr. Natalia Kanem, met with counsellors at the National Child Helpline, run by C-Sema in collaboration with the Government of the United Republic of Tanzania, during her recent visit to Tanzania. The #116 toll-free service, available across all mobile networks in Tanzania mainland and Zanzibar, responds to around 3,500 calls a day from women and children who are at risk of violence, as well as family and community members who report children at risk. Trained counsellors, like Grace, who are all volunteers, are available to take calls 24 hours a day, seven days a week, liaising with support networks and protection systems in the callers' locality.

Eliza's story has a happy ending. As a result of Grace's coordination with Local Government Authorities and District Social Welfare Officers in Msalala, officers from the Police Gender and Children's Desk visited Eliza's parents and the marriage did not take place. Through further follow-up, Grace also secured a mandatory order that ensured Eliza was back in school when they reopened after the holidays in March.

Dr. Kanem expressed her gratitude to C-Sema and counsellors for their dedication and commitment in bringing efforts to advance gender equality and the health, rights and well-being of young people to life, including through the use of digital platforms and new technologies.

In spite of progress and commitment by the Government of the United Republic of Tanzania to tackle gender inequalities and discrimination, as articulated in the Five-year National Plans of Action to End Violence Against Women and Children in both the Tanzania mainland and Zanzibar, violence remains a daily reality for many women, and adolescence is a time of increased vulnerabilities for girls.

UNFPA in Tanzania is supporting efforts to eradicate gender-based violence, through support to strengthen protection systems across the country, including the National Child Helpline, and through the construction of Police Gender and Children's Desks and One-Stop Centres. Community structures, such as Knowledge Centres, where women support each other and take the lead in ending violence in their communities, have also been set up.

Empowering men and boys as agents of change

Efforts to end violence, however, are not focused solely on empowering women and girls. Men and boys, and traditional and community leaders, are also being included in conversations in recognition of their contribution in the struggle for gender equality. Through extensive community outreach, UNFPA's partners are encouraging discussions around harmful ideals of masculinity and opening up alternative views to being a man.

Transforming boys' and men's intimate and interpersonal relationships, and engaging men in holding other men to account, is critical for creating the basis for greater equality and they must not be left out or left behind, said Dr. Kanem: "Every girl and boy should be valued and should be taught that the expression of their right and empowerment should not be centred on overpowering others."

During her visit to Tanzania, Dr. Kanem met the country's first female President, Her Excellency Samia Suluhu Hassan, who expressed the Government of the United Republic of Tanzania's commitment to tackling teenage pregnancies and eliminating preventable maternal and child deaths, and gender-based violence and harmful practices, including female genital mutilation.

Dr. Kanem commended the government's leadership and reaffirmed UNFPA's support to Tanzania to realize national development targets and stronger and more inclusive socioeconomic growth and development, with the goal to leave no one behind in the pursuit of the collective 2030 vision of a better and more equal world for everyone.

UNFPA in Tanzania will continue to support efforts that focus on some of the furthest behind to ensure that women and couples can plan their families and experience a healthy pregnancy and childbirth, and engage whole communities in the fight for a world where women and girls can live in freedom, peace and equality.

* Names have been changed.

1. There are 55 counsellors responding to calls at the National Child Helpline in both Dar es Salaam, Tanzania mainland, and Zanzibar.