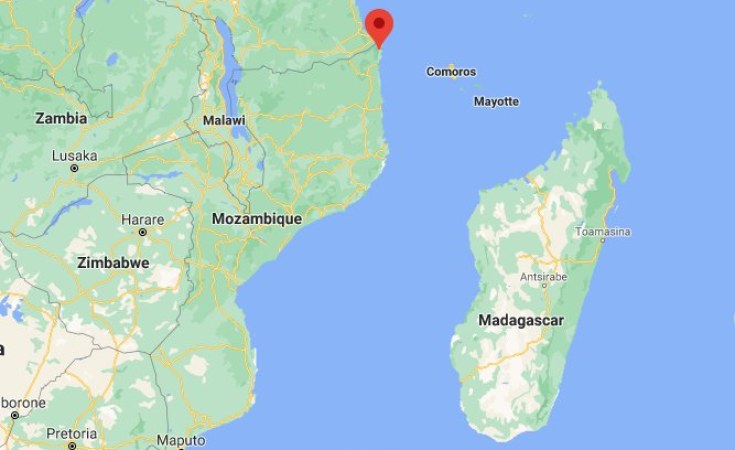 Survivors of an attack by the armed group known locally as 'Al-Shabaab' in Mozambique's Cabo Delgado told Amnesty International that white contractors were prioritized for evacuation ahead of Black locals, in disturbing testimony that points to blatant racism.

An estimated 220 civilians sought refuge in the Amarula Palma Hotel in Palma, during an attack that started on 24 March. Of these, around 200 were Black nationals, and about 20 were white contractors. In the days that followed, South African private military company Dyck Advisory Group (DAG) rescued some from the hotel.

While the white contractors were prioritized to be airlifted to safety, the Black nationals were left to fend for themselves. After the majority of the white contractors and a few well-off Black nationals - among them the Administrator for Palma - were rescued, those left behind attempted to flee by ground convoy but were ambushed by 'Al-Shabaab'.

"Witnesses told us of racial discrimination in decisions about who to evacuate from the Amarula hotel," said Deprose Muchena, Amnesty International's Regional Director for East and Southern Africa.

"These are alarming allegations that the rescue plan was racially segregated, with white contractors obviously receiving preferential treatment.

"The total lack of co-ordination between the Mozambique security forces and Dyck Advisory Group resulted in evacuations that were racist, and must be thoroughly investigated."

The fighting in the port town of Palma followed a pattern similar to previous 'Al-Shabaab' attacks investigated by Amnesty International: following the initial assault, the Mozambique security forces failed to protect civilians and fled, leaving DAG operatives to operate independently.

Amnesty International interviewed 11 people who sought refuge in the Amarula hotel, including five who later survived the convoy attack. They all said that the hotel manager and DAG operatives, who were in charge of the rescue attempt, prioritized the safety of white contractors over local Black people.

Initially, survivors understood there was a plan to prioritize the helicopter evacuation of women, children, and people with disabilities. However, that plan was apparently abandoned in the days that followed.

One survivor told Amnesty International: "We were about 220 people trapped there in the hotel - we [local Black people] were the majority, and the whites were supposed to be about 20. After the rescue and escape, we were about 170 people still alive. Most of the whites were rescued by helicopters, before we left the hotel by car."

Another survivor said: "We didn't want all white people to be rescued, because we knew that if all the whites left, we would be left there to die. We heard them talking about the plan to take all the whites and leave the Blacks."

Several witnesses said the manager of the Amarula hotel took advantage of the chaotic situation to take his two German Shepherd dogs to safety via helicopter, leaving people behind.

One survivor said: "If the dogs hadn't gone, about two or three more people could have gone on the helicopter. That dismayed people because some women didn't get in the helicopter because of the dogs."

The helicopters could only transport six people at a time, and made a total of four trips.

"Terrified locals knew that the rescue of white people first would mean they were abandoned to face 'Al-Shabaab' by themselves," said Deprose Muchena.

"The fact that the hotel manager chose to rescue his dogs instead of people is also extremely shocking, and further proof of the lack of respect for human life that has characterized the Cabo Delgado conflict."

After the helicopters had departed, those left behind decided to risk leaving the hotel in a convoy of cars. They aimed to travel to Quelinde beach, where they hoped to catch a boat to Afungi. However, they were almost immediately ambushed by 'Al-Shabaab' fighters who had been lying in wait.

One survivor told Amnesty International: "The insurgents - when they saw the cars coming out in the backyard - started shooting. The road was full of holes that the insurgents had dug to prevent the cars from passing."

Another survivor added: "They shot at our car; [it] flipped over. I was injured, the bazooka almost hit my head. We left the road and stayed in the woods for six days, without eating or drinking water. We managed to get to the beach and catch a boat to go to Afungi, where we got help."

Two boat trips then transported survivors from Quelinde to Afungi. The first trip took about 60 people, including all the remaining white contractors; the second trip on the following day took about 70 Black local people.

Survivors told Amnesty International that there was a disagreement between the Mozambique security forces and DAG regarding who was responsible for rescuing people. The breakdown in communication meant the civilian survivors were essentially abandoned to flee for their lives, having been left at the mercy of 'Al-Shabaab'.

"Once again during the Cabo Delgado conflict, the inhumane approach taken by both the Mozambique authorities and DAG has caused untold harm," said Deprose Muchena.

"Despite similar previous attacks by 'Al-Shabaab', this is the first instance we are aware of a rescue mission being attempted - and it was only when white contractors were deemed to be at risk.

"Abandoning people during an armed assault simply because of the colour of their skin is racism, and violates the obligation to protect civilians. This cannot go unanswered."

In a meeting with Amnesty International on 7 May, the Mozambique Ministry of Defence said they could only speak about rescue missions that their own forces had conducted in Cabo Delgado, and that race was not a factor in their response.

Exclusive satellite imagery obtained by Amnesty International from 1 April revealed the extent of damage caused by the attack on Palma, that lasted until 31 March. The assault concentrated on public infrastructure and government facilities, rather than homes.

On 9 April, satellite imagery showed 33 more structures - likely homes - had been destroyed since 1 April when the Mozambique security forces had reportedly regained control of the region. In total, 85 structures were visibly damaged, most likely by fire.

This aligns with previous Amnesty International research that indicated the Mozambique security forces have conducted reprisals against the civilian population once 'Al-Shabaab' have retreated.

Cabo Delgado has suffered neglect and under-investment for decades, a problem exacerbated by natural disasters and the spread of COVID-19 across the region. The area is rich in natural gas, rubies, graphite and timber, leading international companies to compete for access to the region. Fighting has intensified since 'Al-Shabaab' attacked the northern port town of Mocímboa da Praia in October 2017.

In a recent report, Amnesty International highlighted how hundreds of civilians in Cabo Delgado have been unlawfully killed by 'Al-Shabaab', government security forces and DAG. The organization is calling for an urgent investigation into these killings, which may amount to war crimes.

Previous Story
Next Story
Terrorism Nothing to Do With Religion, Say Moslem Leaders

Terrorism Nothing to Do With Religion, Say Moslem Leaders