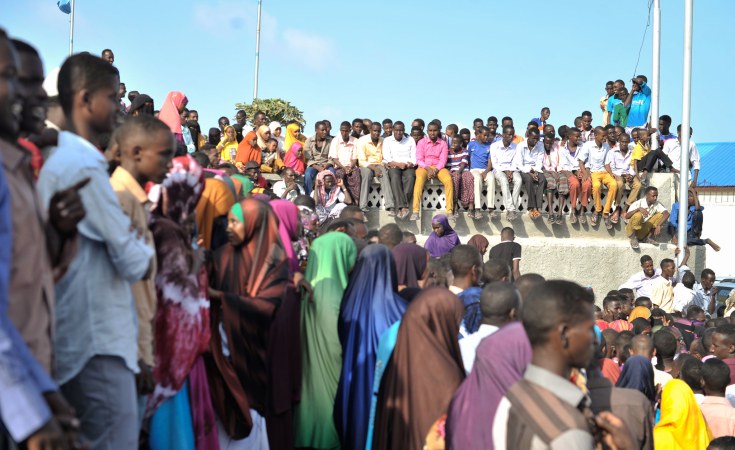 Tobin Jones/AMISOM Photo/Flickr
People gather at the Tomb of the Unknown Soldier in Somalia's capital of Mogadishu to celebrate Eid al-Fitr on July 28, 2014.
Voice of America (Washington, DC)
By Anita Powell

Johannesburg — Eid al-Fitr is a special time of year for the nearly half of Africa's population who are adherents of Islam. But this year's celebration is different amid the continuing coronavirus pandemic and the devastation it has caused across the continent.

Last year's festival was overshadowed by lockdowns and pandemic restrictions worldwide. Some of the same restrictions are in place this year, said Sheikh Mohammed Isaak, an imam at Nairobi's prominent Jamia Mosque, but they have adapted.

"This is a great challenge," he told VOA. "But despite that, we thank Allah that this year we are able to pray together the last 10 days of Ramadan and also today, Eid-al Fitr, we have celebrated or prayed together as a community. And this is something that we should not take for granted -- we have to thank Allah, and this is much better compared to last year, and we hope that the following years will be much better than this year."

"For now it's very difficult," he said. "I can just say, maybe, to the world, my fellow Muslim brothers and sisters wherever they are, as we take care as we celebrate this holiday, let's put in consideration the government regulations, the world regulations -- whatever, so that we can keep safe. The only important thing is to keep safe."

"It was strange not to be able to go to the mosque, especially in the evenings to pray the late night prayers and not to be able to even go to mosque on the day of Eid," he told VOA via Google Hangouts, from Cape Town. "That was very strange. This year we hope that we'll be able to in fact, unless we have a severe spike in the infection rate, we look forward to being able to attend the mosque, our normal prayers, although with the necessary protocols in place. So this year we're excited."

But the festival is also a time to practice zakat, giving alms to the less fortunate. That value has been vaulted to the front this year, as Islamic Relief has stepped up to provide food parcels to those in need -- and not just for fellow Muslims, Mohamed stressed. He said the charity sees a bump in donations during Ramadan.

"Throughout Africa, you find communities that are experiencing extremely trying times, which has only been exacerbated by the pandemic and the ensuing lockdowns in many of these countries," he said. "So we find because of Islamic Relief having a presence globally in over 40 countries around the world -- in Africa, especially in western and eastern Africa, countries such as Niger, Chad, Mali, Sudan, Somalia, Kenya -- all of these countries there is an increased need."

The Ramadan fast is normally broken by the eating of sugary dates, per Muslim tradition. But this year is bittersweet, said South African President Cyril Ramaphosa, who joined a recent iftar in Cape Town.

That hope is echoed from Senegal to Kenya to Ethiopia and South Africa as millions mark the end of this holy month.