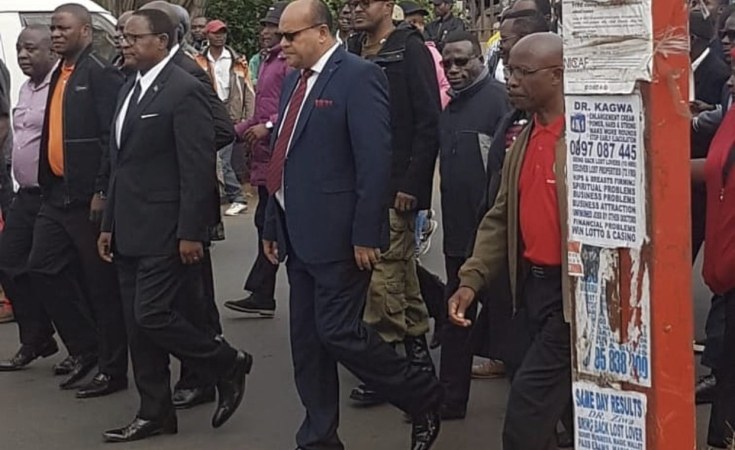 As the battle for the estate of late politician and businessperson Mohammed Sidik Mia rages on, Fatra Mia, who claims to be Mia's second wife, and fighting for part of the estate, has resorted to leaking WhatsApp message exchanges and pictures shared between herself and the fallen former cabinet minister.

The past two weeks has seen social media cycles awash with exchanges some of the leakages, some of which indicating that Mia was desperately trying to keep the relationship a secret that should have remained unknown to his known wife Abida and his mother.

The several WhatsApp voice notes shows how Fatra was blackmailing Mia to give her huge sums of money and buy her poshy cars if the marriage was to remain anonymous.

Mia died on January 12 this year, aged 56, due to Covid-19 complications at the time when he was serving as Minister of Transport and Public Works as well as Malawi Congress Party (MCP) vice-president.

His second wife Fatra acting for herself and her two-year-old child--has gone to court to restrain Mia's other wife, Abida, and her daughter Huraine from "dissipating" the deceased estate until the High Court grants letters of administration.

The 25-year-old, who is based in South Africa, further wants to be appointed either as a receiver or co-receiver of the unspecified estate, pending the grant of letters of administration, according to an ex-parte application for an interlocutory injunction order and appointment of Fatra Mia as receiver of the estate of Mohammed Sidik Mia.

The application was filed on March 9 2021 at the High Court's Principal registry in Blantyre.

In her sworn statement in support of her application for the injunction, Fatra--whose full names are Fatra Amira Jaafar--further says she and the late Mia were married in 2017 under Islamic law. She further says they have a child, born on January 8 2019.

"Upon the deceased's demise, I got in touch with the defendants through two mediators--Khalid Mia and Esa Arab--on distribution of property forming part of the estate.

"In the beginning, the mediators offered me K40 million, being myself and my child's share of the estate. I turned it down.

"Subsequently, on or around February 17 2021, they made a further offer of K150 million in total broken down as: Two town houses and K40 million in cash. I wrote back... communicating my rejection of the offer," reads part of her sworn statement.

Fatra further claims in the statement to have informed the mediators that it would be difficult for her to settle for such an amount when she had no indication of the value of the property.

Abida, has objected to claims on Sidik Mia's estate being made by Fatra Mia, who claims to be Mia's second wife.

Nyasa Times has seen a notice of objection which, Abida tells the court that she objects to Fatra bringing out the proceedings on her own behalf as Sidik Mia's widow and on behalf of her child.

Abida, a deputy minister in Tonse Alliance administration claims that Fatra cannot claim to be a receiver of Sidik Mia's estate because her wedding to Mia was not binding.

Abida also contends that, prior to taking out her application for interim reliefs, Fatra was never appointed litigation guardian of her child and has, therefore, no capacity to commence the present action and application.

In a sworn statement in support of the notice of the application, Abida claims that for a foreign marriage celebrated outside the country to be recognised as a valid marriage in Malawi, at least one of the parties to the marriage must be a foreigner and the said marriage must be valid under the laws of the country in which it was celebrated, which is not the case in Fatra and Sidik Mia's case.

Skeleton arguments in support of Abida's claims by her lawyer Frank Mbeta say Fatra's application is abuse of court processes.

"This is an application in the form [of] raising of preliminary objection by the respondent for an order that the claimant's application for interim reliefs, including the appointment of her as a receiver, be struck out for lack of jurisdiction and abuse of court process," the arguments read.

Fatra is accusing Abida and her Australia-based daughter Huraine of intending to apply for letters of administration while excluding her and her daughter, despite being "legal and beneficial owners of the estate".

She went to court to challenge Abida and Huraine following a public notice placed in the local press dated February 4 this year by their lawyers Sacranie, Gow and Company.

The lawyers also asked all persons who were indebted to the deceased or those with anything in their possession that forms part of the deceased's estate to submit their particulars to them by March 3 2021.

Court documents in the Miscellaneous Application Number 26 of 2021, which we have seen, show that Abida and Huraine are first and second defendants in the matter--one of the country's high-profile estate disputes.

The document also shows she told the mediators that for her to make an informed decision, she needed to know and see the supposed late Mia's will that the mediators claimed he left behind.

"Indeed, given the very tender age of my child and the fact that I have no source of income, I found the amount offered to be extremely low.

"We fear that lack of transparency and accountability will work against us and we will be coerced into accepting an offer which is far from reasonable and unwarranted," further reads Fatra's sworn statement.

But in their letter--which are part of the case file--addressed to Fatra, the two mediators said they had engaged a Mr Latif, senior counsel, partner at Sacranie, Gow and Company and trusted friend and family lawyer of the late Mia for over 20 years, to collect information from creditors.

They said this was to let the net estate of the late Mia be established so that it can be wound up in a transparent and accountable manner, after settling all creditors.

"We understand that as a mother of a minor child of the late Honourable Sidik Mia, you would like the estate to be managed, accounted and distributed in a transparent and dignified manner that befits the deceased and his soul so that the minor child's future is secured," the letter reads.

"We have no doubt that at an appropriate time all the information will be disclosed to all interested parties. We have no doubt that the late Honourable Sidik Mia's estate will be wound up in a transparent and accountable manner as is required by law," adds the letter.

The mediators said their interest was to settle for the sake of the child and their respect for their brother and friend [Sidik], who left behind a vast estate, including real estate, farming, and bank deposits.

"However, we have noted that our efforts to negotiate a settlement have so far failed as you have rejected the proposal. On our own initiative, we are willing to keep the proposal made to you open for the next 14 days, after which the proposal will be withdrawn," reads the letter dated February 17 2021.

But in a March 2 2021 response to the mediators' position, Fatra's lawyer Madalo Banda of Ritz Attorneys-at-Law; said her client is ready and willing to have the matter settled amicably while insisting that an evaluation of the estate be done for the settlement to be meaningful.

The lawyers have also demanded a copy of the purported Mia's will plus other relevant documentation.

Born in Chikwawa on March 4, 1965, the late Mia was a business tycoon, philanthropist and former Chikwawa Nkombezi legislator who held various ministerial positions in Cabinet since 2004. Mia the former Lower Shire political heavyweight.

In the May 2019 Tripartite Elections, he stood as running mate of President Lazarus Chakwera, but gave way to UTM Party leader Saulos Chilima during the June 2020 court-sanctioned fresh presidential election.

Before joining MCP, Mia served as minister in the administration of Bingu wa Mutharika and Joyce Banda.

However, Mia was mostly known as a cattle breeder from Chikwawa, who alongside his wife Abida, run S & A Cold Storage Limited after they bought it from the government in 2000.