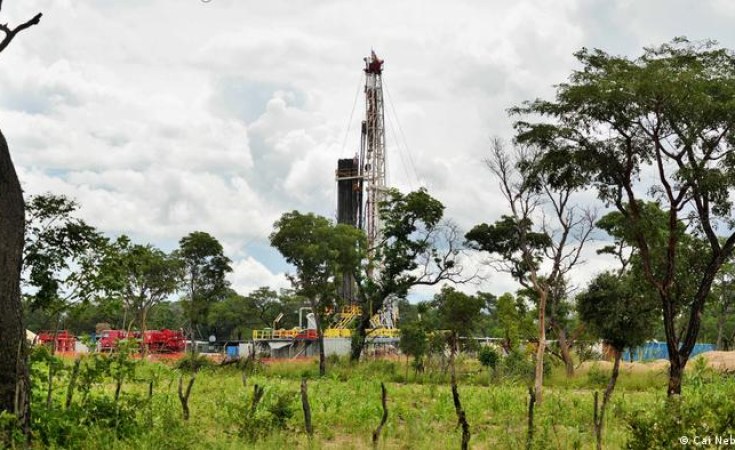 ReconAfrica has said it struck a massive oil field in northern Namibia. But locals said they were not properly consulted about the drilling, and environmentalists fear an oil boom could threaten the Okavango Delta.

The rainy season transforms northeastern Namibia from brown and yellow bushland and trees into a green blanket. The D3425 road is an evasive track running along the ephemeral Omatako River. Deep, waterfilled mudholes make this road, which connects a series of small villages, nearly impassable in the wet months. But near the village of Ncushe, the road suddenly improves dramatically, accompanied by a low, mechanical hum. Not much further down the road, an exploratory drilling rig operated by Canadian company ReconAfrica rises above the trees.

'One of the biggest onshore finds in decades'

In January, ReconAfrica began exploratory drilling and has been bullish in its claims that the Kavango Basin could contain up to 31 billion barrels of crude oil. The Namibian government approved the drilling of three test wells. In April, the company announced it had found a "working petroleum system," a second test well has been drilled and seismic surveys will be conducted to evaluate the viability of potential oil production.

Northeastern Namibia is an underdeveloped region in terms of infrastructure, with mostly gravel roads or sand tracks linking villages. Despite the area's relative proximity to the perennial Okavango River, the area is susceptible to water shortages. ReconAfrica's literature says an oil boom would provide jobs and lift local people out of poverty.

Namibian Energy Minister Thomas Alweendo also hailed the company's announcement as a "great period for the people of Namibia." However, news of the oil discovery raised fears of the ecological effects drilling could have in the water-scarce region and for the over 200,000 people who live there.

"For Namibia, contamination of groundwater is a real risk, and it needs to be managed very well. We also need to be sure that whatever gets approved can physically be done onsite," Piet Smit from the Environment Assessment Professionals Association of Namibia explained in a video discussion on the oil drilling.

"My biggest concern is uncontrolled development," he said, explaining that infrastructure in the Kavango region, which has few sealed roads, large towns, or amenities, would battle to service a sudden influx of people.

"That onus rests really on the Namibian government, not the proponent [ReconAfrica]," he said. 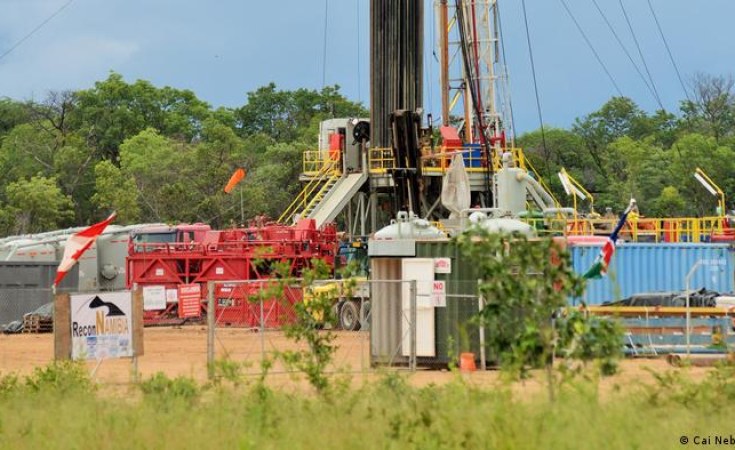 Cai Nebe/Deutsche Welle
An entire road had to be resurfaced for ReconAfrica to transport the oil rig and equipment.

ReconAfrica has licensed drilling areas in northern Namibia and Botswana that cover over 35,000 square kilometers (13,513 square miles), an area larger than Belgium, and that overlap with the continent's largest multi-country conservation park, the Kavango-Zambezi Trans-frontier Conservation Area (KAZA), which includes land in Angola, Botswana, Namibia, Zambia and Zimbabwe. There are also six locally managed wildlife reserves in the area, and the licensed area is close to the world-famous Okavango Delta, a UNESCO World Heritage Site, as well as Namibia's Khaudum National Park, which alone is home to thousands of elephants.

"Drilling will definitely disrupt biodiversity, although we know animals can be resilient," Smit said.

Local tourism operators like Jofie Lamprecht see the oil drilling as an intrusion and a threat to an important biodiversity hotspot that includes elephants, predators, and many unique floras.

"The First World is trying to make money out of the Third World, and I don't think the risk taken to find oil is sustainable or ecologically sound. These areas need to be left as they are and the wilderness there preserved because, in 15 or 20 years, we'll look back and say what have we done," he told DW.

ReconAfrica has repeatedly said it is following government-approved procedures, is not drilling in ecologically sensitive areas and has obtained all necessary permits for its work.

Initially, ReconAfrica raised eyebrows with its claim of a huge oil find in Namibia and announcing it was exploring the possibilities of conventional and "unconventional" means to extract the oil. Fracking, the unconventional method, is considered by many to be a dangerous and environmentally harmful practice as it can poison aquifers and is only to be used when access oil through conventional drilling is difficult.

"In their marketing, ReconAfrica announced to their people in North America that this exploration program was based fracking, and they presented data on the amount of oil and gas which would be recoverable through fracking," said Chris Brown of the Namibian Chamber for the Environment. "In Namibia, they've vehemently denied that fracking would take place."

"We're simply not sure about their intentions here," he added.

Though talk of fracking has since died down, and ReconAfrica has removed references to fracking from much of its literature on the Namibian oil find, the company has been accused of not properly conducting public consultations. 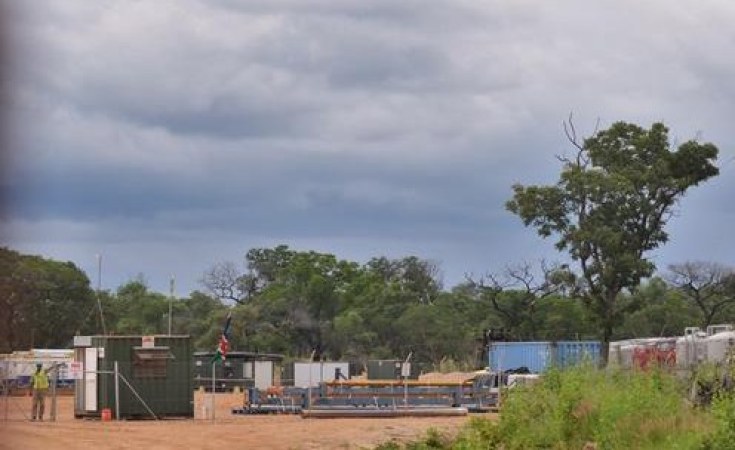 "The public wants to know what the bigger picture is, and what the implications are," he said."ReconAfrica has been very reticent to be open and honest about what the whole program entails and what it could look like in the end. The discussion has been deliberately divided into little slices so that the endpoint is not on the table for discussion."

Reports of bullying of community leaders who have spoken out against oil drilling have surfaced, as well as accusations that ReconAfrica started drilling before obtaining permission to drill on local land.

Namibian Minister for Agriculture, Water and Land Reform Calle Schlettwein, in responding to questionsposed by National Geographic, said ReconAfrica had not been granted permission to extract water nor to dispose of wastewater.

Local and international groups have criticized the drilling, both in principle and how the government has handled the discovery.

Frederico Links of the Windhoek-based Institute for Public Policy Research said trust between affected Namibians and the government has been affected.

"Questions have been asked if the environmental standards have been upheld, and how it was possible for ReconAfrica to get the permissions, and how that was allowed to happen," Links said.

The widespread local and international criticism of the oil exploration has left the government scrambling to stick to a narrative.

"This criticism is something the Namibian government didn't expect," he added. "Information hasn't been shared with local leaders, traditional authorities or the public."

Links said many Namibians are particularly scared of the "resource curse," especially when it comes to oil. Neighboring Angola remains a developing country despite significant oil wealth and the conflict in northern Mozambique is also tied in part to natural gas extraction.

"The discovery of oil has destabilized countries in our region and other parts of the continent," Links told DW.

He pointed out that if a viable oil field is discovered, resentment could grow in the highly impoverished, underdeveloped nature of regions like the Kavango.

"You have this immense wealth being pumped from under the ground amidst poverty and inequality," he said. "When people don't see themselves benefitting, you can see how the conditions exist that could become a security situation for Namibia if not managed properly." 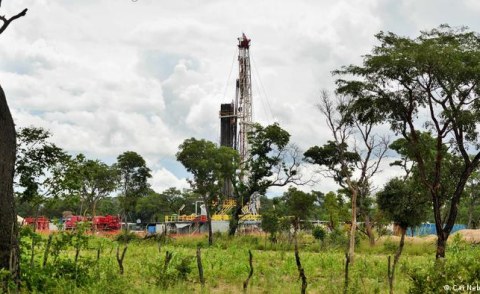 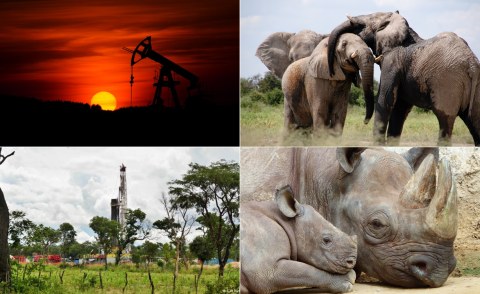 Oil Exploration Firm in Namibia Misled Investors - Whistleblower
Tagged:
Copyright © 2021 Deutsche Welle. All rights reserved. Distributed by AllAfrica Global Media (allAfrica.com). To contact the copyright holder directly for corrections — or for permission to republish or make other authorized use of this material, click here.