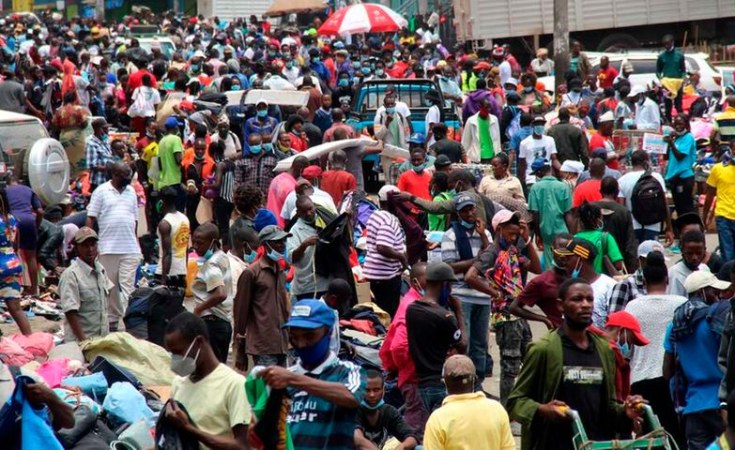 Lucy Wanjiru/Nation Media Group
Traders go about their business at Gikomba Market on March 28, 2021, some without face masks and while defying the social distancing requirement for curbing the spread of Covid-19.
The Nation (Nairobi)
By Amina Wako

This resulted in a positivity rate of 3.5 per cent, the Health ministry said in a statement, adding the country has conducted 1,746,449 tests so far.

Of the new patients, 63 were Kenyans and nine foreigners, 27 female and 45 male, the youngest a year old and the oldest 83 years.

Nairobi County accounted for 28 of the new cases, Mombasa 22, Busia nine, Kilifi three, Embu and Homa Bay two each, and Kwale, Laikipia, Machakos, Nakuru, Nyeri and Kiambu one each.

Thus far, countries across the world are vaccinating their populations while other, such as India, are also facing new rising infections due to deadlier variants of the coronavirus.

He said that three of the 10 deaths occurred over the last one month while seven were confirmed after facility records were audited.

CS Kagwe said 262 more patients had recovered, 235 of them at home and 58 at health facilities countrywide.

He further said that 1,036 patients had been hospitalised by Monday, 108 of them under intensive care units (ICU). Of those in ICU, 23 were on ventilator support, 70 on supplemental oxygen and 29 under observation.

Another 84 patients were separately on supplemental oxygen, 79 of them being in general wards and five in high dependency units (HDU).

The number of patients in the home-based care programme stood at 4,729.

The number of confirmed Covid-19 cases in Africa had reached 4,685,412 as of Monday noon, the Africa Centers for Disease Control and Prevention (Africa CDC) said.

The Africa CDC, the specialised healthcare agency of the 55-member African Union, said the death toll from the pandemic stood at 126,161, while 4,239,709 patients across the continent had recovered from the disease.

South Africa, Morocco, Tunisia, Ethiopia and Egypt were the countries with the most cases in the continent, according to the Africa CDC.

South Africa had recorded 1,611,143 Covid-19 cases, the most among African countries.

Morocco was the second African country to have passed the 500,000 Covid-19 infections mark, registering 514,817 Covid-19 cases as of Monday noon.

Kenyans Stranded in India After Flights Suspension Tell of Woes