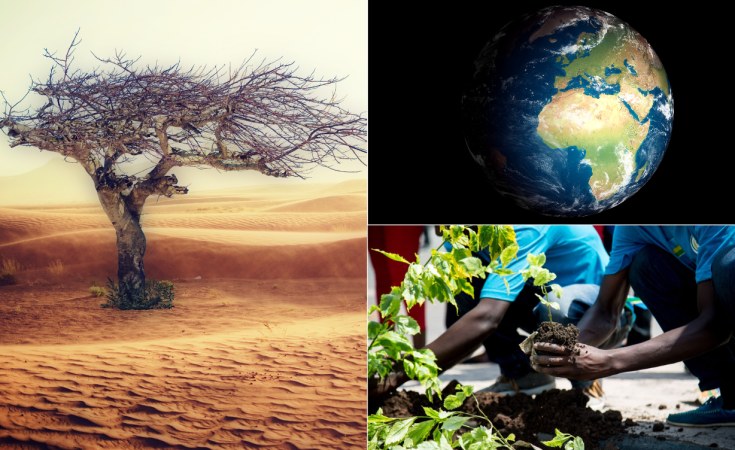 Urbana, Illinois — Recently, I participated in a Congressional hearing on the "Effects of climate change in Africa", before the House Foreign Affairs Subcommittee on Africa, Global Health, Global Human Rights, and Internal Organizations, chaired by Congresswoman, Karen Bass.

Without a doubt, climate change is arguably, the most pressing challenge of our time, the biggest threat to humanity and an increasing threat to Africa and our global world. Because of climate change, millions of African citizens, many of whom depend on agriculture as a source of livelihood, are hungry, poor, food insecure, and displaced.

Tens of millions of African citizens are driven from their homes by floods, storms, intense cyclones, and droughts. Sadly, these numbers are expected to increase. Tragically, it is the world's poorest and most vulnerable communities that are suffering.

Helping African countries to address the escalating climate change crisis is the right thing to do for the United States. African Governments cannot do it alone, and nor should they

Already in 2021, flooding events have damaged homes, displaced communities, and killed African citizens from several countries, from Angola to Zimbabwe. But if it is not flooding, then it's usually a drought that's harming members of the continent.

Repetitive and vicious cycles of drought and famines have become common in Africa. As a result, millions of African citizens are living in abject poverty. Millions have been forced to migrate-and along the migration paths, women and girls are often raped, leaving lifelong scars that are hard to erase.

Then what drought hasn't taken, crop-eating invasive insects often take. For instance, East Africa is still recovering from a plague of locusts - the most extensive and worst outbreaks the region had seen in generations. Before the locusts were the fall armyworm which affected more than 44 African countries. I am an Entomologist, and science predicts a future where insect invasions will become common.

While the impacts of climate change have been enormous, we MUST applaud African countries because they have not walked away from these issues.

They consider the climate crisis a serious threat and have boldly stepped up to cut greenhouse gas emissions and address the climate change crisis. African countries are members of international climate agreements, including the 2016 Paris Climate Accord, and have fulfilled the critical requirements.

And many governments are prioritizing climate-proofing and mitigation development activities in critical sectors like agriculture and energy. Further, they've launched new initiatives such as the African Development Bank's Desert to Power project, and the Great Green Wall initiative.

The truth, however, is that African leaders cannot do this alone. And nor should they. The U.S. must help and here's how.

First, the US must cut its own greenhouse emissions and continue treating climate change as an essential element of U.S. foreign policy and national security. They contribute more to climate change than African nations and curbing their own contributions would help Africa - and all nations. the U.S. must live up to the promises made at the recently concluded White House Climate Summit.

Second, the U.S. should help African countries build a climate-resilient and vaccinated agricultural sector. Unless African agriculture is resilient, even the most ambitious climate mitigation and action initiatives will bear minimal returns.

Indeed, African agriculture must modernize and doing so demands significant investments in irrigation, better roads, seed systems, post-harvesting systems and climate smart agricultural and technologies. This will pave the way for the attainment of African food security, self-sustainability and facilitate a more stable and prosperous African continent. Launched initiatives must be guided by recent science evidence.

Third, beyond the agricultural sector, the US can help African countries build their renewable energy sector. Doing so will create millions of jobs.

Fourth, the US must commit to sharing resources, expertise, and capabilities with the African countries. Furthermore, the US can work with African countries and enhance their ability to tap on big data.

Finally, as an agricultural scientist and an Assistant Professor at a Land Grant University, I see firsthand how one of the ways the US can help is to increase the funding through US Feed the Future Initiatives. This would allow for more collaborative research between African universities and US universities. Initiatives funded by the US should always focus on what African countries need and not vice versa.

Climate change is the most urgent crisis of our times. Helping African countries to address the escalating climate change crisis is the right thing to do for the United States. African Governments cannot do it alone, and nor should they. African lives are at stake. Now is the time to ACT by looking to science.

Dr. Esther Ngumbi is an Assistant Professor at the University of Illinois at Urbana Champaign, and a Senior Food Security Fellow with the Aspen Institute, New Voices.

How Countries Alongside the Sahara Can Restore Productive Land Faster