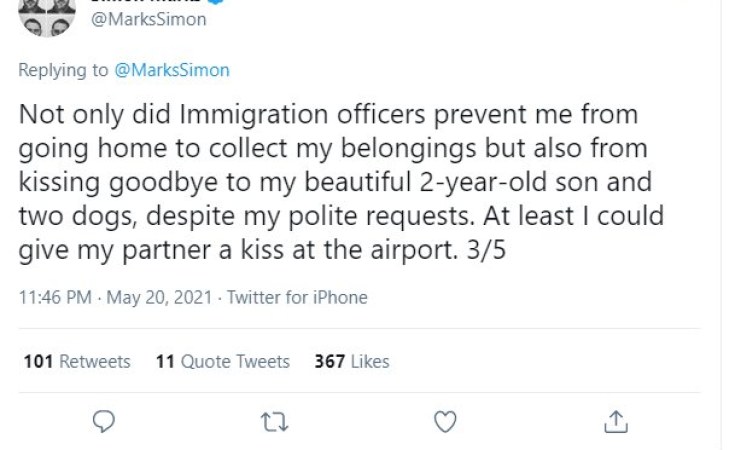 Reporters Without Borders (RSF) is appalled by Ethiopia's expulsion of Simon Marks, an Addis Ababa-based reporter for the New York Times and Bloomberg News, just weeks after it suspended his accreditation. The Ethiopian authorities must stop constantly intimidating journalists, RSF said.

This is the first time in years that Ethiopia has expelled a foreign reporter. Without any prior warning and without any explanation, officials took Marks, an Irish journalist based in Ethiopia for the past two years, to Addis Ababa airport yesterday and put him on a flight out of the country. Despite his requests, he was not allowed to collect his passport or say goodbye to his son.

"I'm dreadfully disappointed about the decision the Ethiopian government has made," Marks told RSF, noting that it came just a month ahead of national elections. "The government promised to create an environment in which a free press can prosper and this incident proves that is under threat."

RSF tried repeatedly to contact the Ethiopian Broadcasting Authority (EBA), which previously suspended Marks' accreditation, and other Ethiopian officials to discover the reason for this decision, but without success.

"A new milestone has been passed in the harassment of journalists in Ethiopia," said Arnaud Froger, the head of RSF's Africa desk. "For the first time since Abiy Ahmed became prime minister in 2018, a foreign correspondent has been expelled because of his reporting. This decision is unfortunately a further example of the return to the past taking place with regard to the freedom to inform. There is no justification for this expulsion, which has the disturbing hallmarks of a warning to all journalists, both foreign and Ethiopian, in a pre-electoral context. We ask the authorities to reverse this decision and to put a stop to the repeated intimidation of media personnel, especially in the Tigray region."

The EBA suspended Marks' accreditation two months ago for "lacking impartiality" and for disseminating "fake news." The letter giving the reasons for this decision referred in particular to two articles about the Tigrayan conflict and Ethiopia's border dispute with Sudan that were published early this year by Bloomberg. On 7 May, he was told he would not be allowed to resume working until October.

It is becoming increasingly difficult for journalists to operate and to get access to information in Ethiopia, especially in the northern Tigray region, where the federal government has been fighting a war with the local authorities since November.

The deterioration in press freedom is affecting Ethiopian journalists as well as foreign ones. Lucy Kassa, a freelancer who had been covering the war for several international media outlets, was physically attacked in her Addis Ababa home last February by three armed intruders who seemed intent on intimidating her. The EBA's response to the attack was to say she had no press accreditation.

After rising in RSF's World Press Freedom Index for three years, Ethiopia has fallen two places in the 2021 Index and is now ranked 101st out of 180 countries.

Tigray - More U.S. Sanctions on Cards for Ethiopia, Eritrea
Tagged:
Copyright © 2021 Reporters sans Frontières. All rights reserved. Distributed by AllAfrica Global Media (allAfrica.com). To contact the copyright holder directly for corrections — or for permission to republish or make other authorized use of this material, click here.

Kenya's Economy Joined at The Hip With China - Report
Entertainment