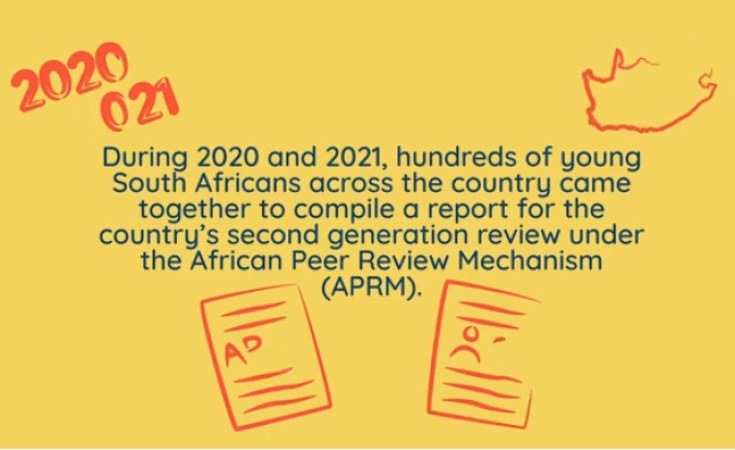 Every year on 25 May, Africans commemorate the founding of the Organisation of African Unity in 1963. As the OAU transformed itself into the African Union in the late 1990s and early 2000s, it emphasised good governance as a prerequisite for peaceful and prosperous societies. One of the new institutions built in 2003 was the African Peer Review Mechanism (APRM), to promote and measure governance in its member states. Now, young people in South Africa have had their say on the critical governance challenges facing the country, as it prepares for its second-generation APRM review, following a base review in 2007.

Civil society organisations (CSOs) and citizens themselves are often ill-informed and sceptical about the APRM and how they can be meaningfully involved in their national processes. If they want to participate, they struggle to make an impact. They may be “consulted” to tick a box, but it tends to end there. Young people feel especially marginalised, and struggle to make their voices heard.

But this is changing. Since 2018, the South African Institute of International Affairs (SAIIA) has partnered with local civil society organisations in Namibia , Botswana and Zimbabwe to co-create written submissions to feed into their national APRM process. Through these projects, CSOs have become better informed about the APRM and the opportunities it presents to participate more fully in dialogue, research, and policymaking. Some of the issues raised across all states included healthcare, education, separation of powers, poverty and inequality.

In September 2020, SAIIA and Jasoro Consulting kicked off the equivalent process in South Africa . But this time, the focus was on youth. Young people across the country jointly decided on what they thought were the major governance problems facing South Africa from their varied perspectives. COVID-19 restrictions meant that in-person meetings had to be avoided. This moved the entire project online. This actually increased its reach, as over 100 young people from all nine South African provinces were able to participate easily and frequently in virtual meetings.

The submission also states, “The 2019 Global Peace Index ranked South Africa as one of the most violent countries in the world (127 out of 163). South Africa also has one of the highest murder rates outside of a war zone.  Only 87% of adults feel safe walking in their neighbourhoods during the day while 41.8% feel safe to do so at night. As with other social ills, the burden of crime and violence disproportionately affects youth.”

It is hoped that this youth submission will be seriously considered by South Africa’s APRM National Governing Council (NGC) – the multi-stakeholder body that oversees the review in each country. Young people have been invited to present their findings to the NGC on 11 June.

The submission should also inform the continental APRM Secretariat as it prepares its background paper on South Africa in advance of the country’s second-generation review. The youth will seek to meet with the APRM Country Review Mission when it visits South Africa to put their views across again. Through these different channels, the thoughtful analysis and recommendations made by young people will flow into the review process.

South Africa’s future leaders have stepped up and voiced their views strongly and clearly. It now remains to be seen if the country is really listening.

Steven Gruzd is the head of the African Governance and Diplomacy Programme at the South African Institute of International Affairs in Johannesburg. He was the team leader for the South African APRM Popular Sensitisation Project .

See a short video about the SAPS project here .

Tagged:
Copyright © 2021 South African Institute of International Affairs. All rights reserved. Distributed by AllAfrica Global Media (allAfrica.com). To contact the copyright holder directly for corrections — or for permission to republish or make other authorized use of this material, click here.