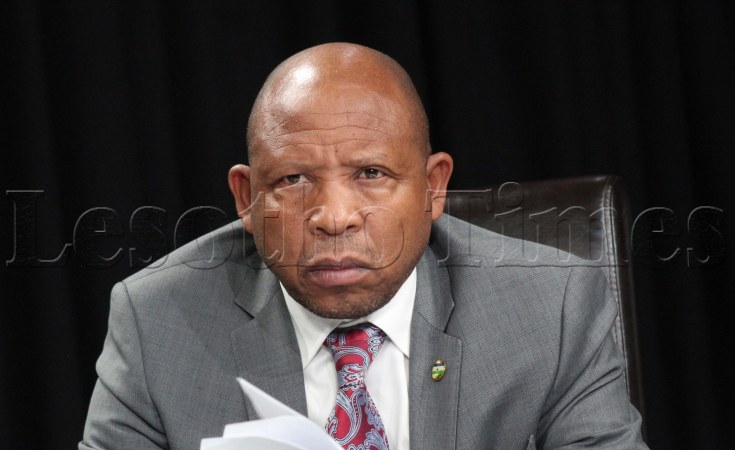 A botched 2018 M1,7 billion solar energy deal has come back to haunt Prime Minister Moeketsi Majoro's coalition which now risks having Lesotho's international assets abroad seized to compensate a company that claims to have lost out in the deal.

This after a German solar company, Frazer Solar, which had negotiated a deal with the previous Thomas Thabane administration to undertake various solar power projects to Lesotho, this week approached the federal court in Washington D.C to compel the government to pay it £50 million (M856 million) in damages for the alleged breach of the contract.

The damages were awarded by a South African arbitrator in 2019. The arbitrator, South African lawyer Vincent Maleka, was appointed by the Johannesburg Bar Council at the request of Frazer Solar who argued that the terms of its agreement with the Lesotho government provided for the appointment of an arbitrator in the event of either party breaching the contract.

Dr Majoro was finance minister at the time of the deal. He later refused to sign the financing agreement for the project aimed at providing Lesotho with 40 000 solar water heating systems, 20 megawatts of solar power capacity, 1 million LED lights and 350 000 solar lanterns over four years. Mr Thabane's office had already signed the main supply agreement, the company claimed.

The botched deal has now come back to haunt Dr Majoro after Frazer Solar was awarded the massive damages for the government's alleged failure to ensure the implementation of the project.

In a statement this week, Frazer Solar said the solar project deal was sealed in 2018 following meetings it held with then Prime Minister Thabane whose office signed the main supply agreement.

"In August 2018, Frazer Solar met with then Prime Minister Tom Thabane and then Minister in the Prime Minister's Office Temeki Tšolo to discuss a detailed presentation of the project and setting out the benefits, energy and cost savings it would bring about," Frazer Solar said in a statement this week.

"In September 2018, following negotiations, a written supply agreement was concluded, signed by Robert Frazer on behalf of Frazer Solar, and Minister Tšolo on behalf of the Kingdom of Lesotho. The financing agreement with KFW would be finalised by the Minister of Finance," Frazer Solar further said.

However, the project stalled in October 2018 when Dr Majoro allegedly refused to sign the financing agreement.

"In October 2018, Frazer Solar wrote to the Ministry of Finance to establish the reasons for the delay in finalising the finance agreements. Frazer Solar was told by the Ministry that the project required cabinet support and leadership from the Ministry of Energy. However, this support had already been confirmed by the office of the Prime Minister, which could not explain the ministry's refusal to execute the financial agreement," Frazer Solar said in its statement.

Following Dr Majoro's alleged refusal to approve the project, Frazer Solar said it was left with no choice but to commence arbitration proceedings in South Africa.

It said due to non-cooperation by the Lesotho government, it approached the Johannesburg Bar Council to appoint an independent arbitrator.

It said Advocate Maleka was appointed arbitrator in its dispute with the Lesotho government. In August 2019, Adv Maleka found in Frazer Solar's favour on the grounds that the Ministry of Finance "obstructed implementation by refusing to conclude the relevant Finance Agreement".

"Frazer Solar implemented arbitration proceedings against the Government of Lesotho in 2019. Its claim was upheld and it was awarded damages of £50 million in addition to pre-award interest in the amount of £754 273. To date, the government of Lesotho has refused to engage with the legal process and has not paid any damages," Frazer Solar said in its statement.

Dr Majoro yesterday told journalists that Frazer Solar had not contacted them on the issue and they only read about plans to seize the government's assets in the South African media.

"We learnt of an award to a company called Frazer Solar in the South African and international newspapers yesterday. We were taken aback by this but we are studying this arbitral award and we will respond appropriately in due course. We are surprised because this was awarded in South Africa when we have courts in Lesotho but we are trying to understand why this happened.

"The company indicated that it was lobbying institutions around the world to help attach Lesotho's properties to pay off the damages claim. If we really owed them money, the first thing would have been for them to come to Lesotho and get us to pay them. But Lesotho's properties here and overseas are protected and we don't think the action that they are proposing will succeed. But in the next few weeks, we will understand what is going on," Dr Majoro said yesterday.

In a separate interview with the Lesotho Times this week, Communications, Science and Technology Minister Keketso Sello denied that the government ever signed a contract with Frazer Solar for the implementation of the solar project. He said the government was now "applying its mind" on how best to address the matter.

"I was a minister at that time and I don't remember the government of Lesotho entering into a contract of that sort with anyone. However, we are closely monitoring the developments and the government is currently applying its mind on how best to address this matter.

"The nation must be rest assured that Lesotho is not going to have its assets seized by anyone. We will not allow that to happen. After all, our assets are protected from seizure by international protocols and no one will lay claim to such assets because of disputed contractual obligations," Mr Sello said.

Back in 2018, Dr Majoro was accused of blocking the project by some members of All Basotho Convention (ABC) party. One of the people who attacked Dr Majoro is former ABC youth league member Litšoane Liaho who has since joined the Democratic Congress (DC).

At the time, Mr Liaho took to national radio to accuse Dr Majoro of blocking the implementation of the solar energy project.

Dr Majoro however, rubbished the allegations, saying he suspected there was a campaign to tarnish his image. This was during the time when Dr Majoro had been nominated for the ABC deputy leader's post which he later lost to Professor Nqosa Mahao who has since formed his own Basotho Action Party. Dr Majoro has since been appointed ABC deputy leader by the party's national executive committee (NEC).

Mr Liaho repeated the same attacks on Dr Majoro in an interview with this publication yesterday.

"A decision was made by the previous government that the solar energy project must go ahead but the person who stood in the way of that project was Dr Majoro.

"We argued that this was a good project which would create jobs and significantly lower Lesotho's spending on electricity imports but Dr Majoro flatly refused to approve the project.

"I remember very well that the representative of that company (Frazer Solar) had already met with the His Majesty King Letsie III, Ntate Thabane and the cabinet who all agreed to this project except Dr Majoro. He said the project was costly but the non-fulfilment has now landed us in financial problems.

"The country now has to pay for a contract that was never implemented simply because Dr Majoro refused to approve it. Had Dr Majoro listened to us, we would not be in this mess," Mr Liaho said.

Previous Story
Tagged:
Copyright © 2021 Lesotho Times. All rights reserved. Distributed by AllAfrica Global Media (allAfrica.com). To contact the copyright holder directly for corrections — or for permission to republish or make other authorized use of this material, click here.