Kenya: Art Movement to Give Nairobi a Facelift Through All Murals 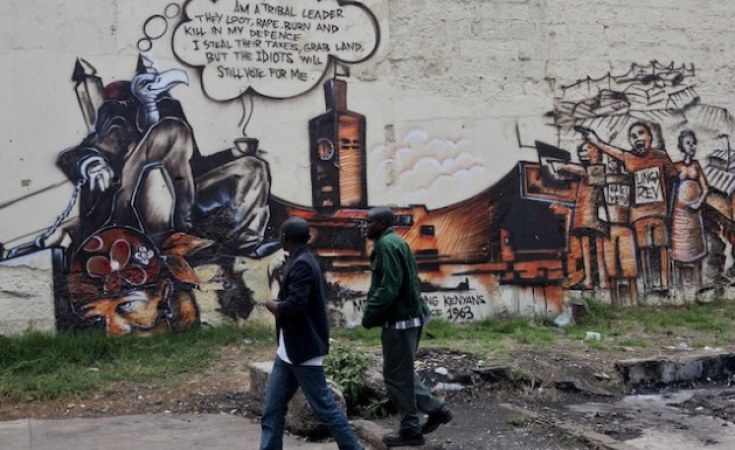 The Trust for Indigenous Culture and Health (TICAH) is on a mission to give the city of Nairobi a facelift. In collaboration with local artists, Nairobi Metropolitan Services (NMS), the Safer Nairobi Initiative and the GoDown Arts Centre, TICAH recently launched an art movement that will use colourful murals to beautify the city. The movement is dubbed #ALAAA! and its primary objective is to offer Nairobi residents a serving of 'speaking walls' aside from highlighting the vibrancy and creativity of the city.

Why #ALAAA!? According to TICAH, that's the sound of astonishment that people will make when they set their eyes on the amazing works of art around the city. Already, the movement has created a mural at the Moi Avenue Primary School perimeter wall, on the Globe Cinema roundabout side. The motif of the artworks on the wall is the vitality of the streets of Nairobi. It features the paintings of Allan 'Think' Kioko, Michael Nyerere, Solomon, 'Solo' Luvai, Rose Ahono, Collins Oduor, Leevans Linyerere and Wilson Matunda.

After Moi Avenue Primary School perimeter wall, the movement has three other venues on the queue. Muthurwa shall be the first among them. In the meantime, the curatorial team is actively scouting for new locations and wooing more artists to hop into the bandwagon.

Otieno acknowledges that a good number of the youth are in the arts sector and have been affected by the coronavirus pandemic. He considers the #ALAAA! art movement as the bridge between young artists and the Nairobi City County government.

"We are adopting a participatory approach to tactical urbanism. Our aim is to catalyse inclusivity and listen to the voices of our communities. I have floated this idea to the council of governors and it has warmed up to it. The council wants the artists to create more murals."

Otieno observes that there are concrete walls all over Nairobi. Around homes, parks, schools and hotels. It is his concern, nonetheless, that besides physically and figuratively separating communities, the walls are uninspiring.

"When you drive around Nairobi and see only walls, you get no sense of the vibrancy, creativity and magic of the city and its people that lie beyond the walls," Otieno says.

The art movement partners have a vision of creating a city full of murals that explore artistic experimentation and expression that connect to people's hearts. The city it envisions is one in which artists and the public feel that they are part of an initiative that will positively change their environment. The long term plan of the movement is to turn Nairobi into a city that is internationally known for its beautiful murals and public art.

Public art isn't a new genre in Kenya. The country has many sculptures in the streets, wall paintings in informal settlements and our street poets brave our tropical evenings to showcase their art. The genre is alive and well. It has always been here. What is urgently needed is a clear public art policy that will create a public art fund and save the genre from neglect.

Thanks to policy clarity, public art will serve its ideal function - curating our public history, evolving cultures and collective memory. An economically empowered art industry will ensure a continuous and sustained 'birth' of artists who will artistically respond to the happenings of their times. Such artists will share their inner vision with the outside world. They shall create a chronicle of their generation's public experiences.

The country should deviate from what has hitherto been the norm - confining our art to museums. Instead, we should find good company in the society of other cities such as Oslo, Norway, Chicago, USA, Rio de Janeiro, Brazil, Tel Aviv, Israel, Melbourne and Australia, among others. These are cities whose streets are dotted with beautiful and thought-provoking works of art.

TICAH's interest in public art is inspired by their belief in the connection between holistic health and culture. According to the trust, culture shapes everything and it is a marker of a healthy community. TICAH believes that human beings experience good health in their bodies, spirit as well as within their relationships, households and communities. Their definition of health appreciates that a people's values, opportunities for expression and creation are deeply predictive of their capacity to establish just and fair societies.