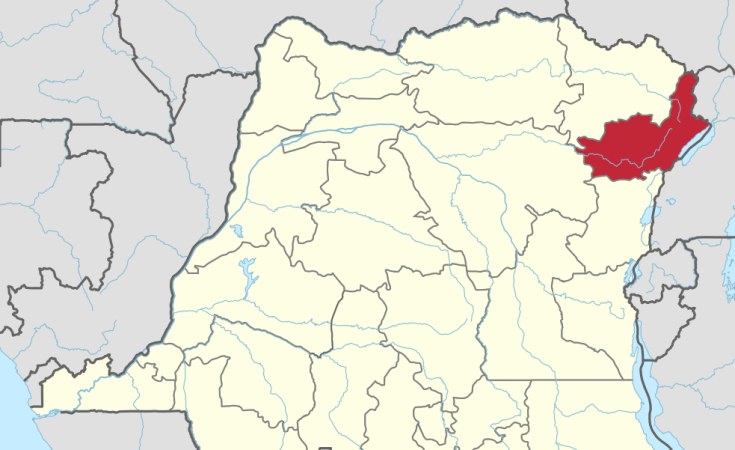 Wikimedia Commons
A map showing Ituri province in the Democratic Republic of Congo.
The Nation (Nairobi)
By Patrick Ilunga

Officials in these villages attribute these massacres to the rebel group established in the forests of eastern DRC, and which operates in the country and in Uganda. For now, the Congolese army has yet to communicate the identity of attackers, though there are several armed groups that are active in Ituri province.

As of early Monday afternoon, 57 bodies were found. 26 people were killed in the Rubingo IDP camp and 3 in the centre of Kinyanjojo, in the Bahema Boga chiefdom. 28 other bodies were discovered in the chiefdom of Banyali Tchabi.

The atrocities all took place in the south-east of the town of Bunia, in the territory of Irumu.

According to Gaston Kandole, president of the civil society of Boga, more than 25 houses were also torched during the attack.

While the figure of those killed is currently at 57, the number could go up because several people are still missing in the villages that were attacked.

Over the past week, mass killings have resumed in North Kivu and Ituri, two provinces ruled for almost a month by military officers.

North-Kivu and Ituri were declared as under siege by the presidency. To this end, President Felix Tshisekedi had announced named Lieutenant-General Constant Ndima as head of North Kivu and Lieutenant-General Johnny Nkashama Luboya to Ituri province, a move that was criticised by international lobby Human Rights Watch (HRW) because of their past.