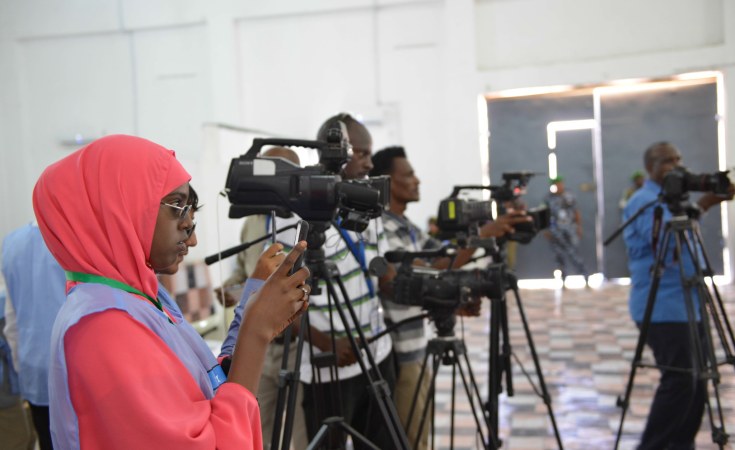 Mogadishu, Somalia — The Federation of Somali Journalists has launched a campaign to combat the spread of false information, fake news, hate speech and propaganda. The federation says Somalia is already seeing a huge spike in social media misinformation campaigns ahead of elections expected before the end of July.

The country's chronic internal conflict and political instability has made Somalia a fertile ground for the spread of misinformation. The growing number of young Somalis who connect and share news on social media platforms has become a prime target for this tide of fake news.

One example is a news headline that said the Somali Parliament wanted to oust the prime minister after he objected to a term extension for President Mohamed Abdullahi Farmajo. It later turned out to be fake news.

To curb the growing challenge for media workers in the country, the Federation of Somali Journalists has launched what it calls a Disinformation Lab to combat the spread of lies, myths and distortions ahead of upcoming elections.

The lead researcher and director of the lab, Mohamed Abdimalik, says they will give journalists the necessary skills and knowledge to detect fake news during polls.

"The lab's researchers will support journalists with digital tools, training and other resources to detect, analyze and flag false election-related news in real-time fashion," Abdimalik said. "In a fragile environment where trust is so low, safeguarding the election process from fake news is as crucial as saving the country from descending into civil war again."

Journalists, key bloggers and social media influencers in Somalia say there is a need for extra caution during the presidential and parliamentary election process.

"As journalists, bloggers and social media influencers, we have extra responsibility, especially during elections, to inform the public about the crucial process," said Hassan Osman Istiila, a journalist in Somalia. "Thus, we need to be very careful not to run news that (is) not verified, because it will be irresponsible. Better late news than fake news."

The Somali government, which has a poor record when it comes to press freedom in the country, says it will play its part in reducing fake news during the polls by giving access to journalists in the voting centers so they can get firsthand information.

Abdirahim Isse Adow, who is the director of media training at the Ministry of Information, says the ministry will also boost awareness campaigns about fake news through state media and in collaboration with civil society groups and religious leaders.

Meanwhile, Somali political leaders have appealed to the media to perform their duties professionally and responsibly as the Horn of Africa nation gears up for what promises to be a competitive presidential election.