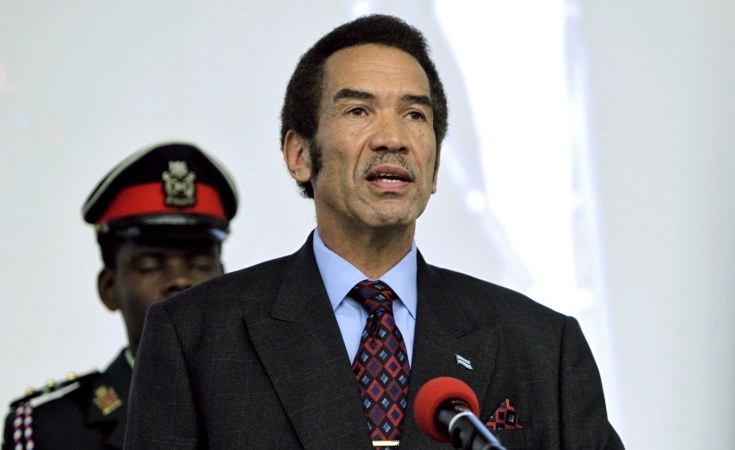 Botswana's former president, Ian Khama, says the Ovaherero communities in that country should benefit from the N$18 billion offered by the German government to Namibia last week.

Khama said this in an interview with The Namibian this week when asked about his reaction to the German offer that was pledged last week.

This is to finance infrastructure, healthcare and training projects for communities descending from victims of the 1904-1908 genocide.

"The call is not to the Namibian government, but rather the Botswana regime to ensure the Herero people in our country also benefit from the gesture being offered by the German government," Khama said.

Khama said, while president of Botswana between 2008 and 2018, he remembers the Herero community in Botswana making presentations, asking for his intervention in the genocide matter.

"Some Herero leaders and their elders in Botswana did so, as well as some from Namibia when attending cultural festivities or funerals in Botswana," Khama said.

"I recall about three occasions when they made representations to me about the issue."

Khama said he made efforts to attend to their concerns through Botswana's foreign affairs ministry.

German settlers massacred thousands of Herero and Nama people from 1904 to 1908, after they rebelled against Berlin's rule in the colony, which was German Southwest Africa at the time.

"I recall asking our ministry to make approaches to the Namibian government about the matter whereupon we were assured that they were constantly engaged with the matter with the German government.

"I was satisfied that indeed the Namibian government was actively engaging to resolve the long outstanding matter," Khama said.

Known as Baherero in Botswana, their population is estimated to be 100 000. The communities are mostly found in areas of Maun, Sepopa, Toromuja, Karee and Etsha.

As part of their official recognition, German foreign minister Heiko Maas said in a statement last week that his country was paying a "gesture of recognition of the immeasurable suffering that was inflicted on the victims."

Maas was expected to arrive in Namibia this week to sign the offer agreement followed by the apology, but The Namibian understands that the trip has been cancelled indefinitely.

Netumbo Nandi-Ndaitwah, minister of international relations and cooperation told The Namibian this week that Khama's call will be considered when 'details' of the official position of the country is presented.

"We will soon explain all the details pertaining to the German offer in a couple of days, so I cannot say much at this stage," Nandi-Ndaitwah said.

The German offer has been rejected by chiefs representing the affected communities.

The Namibian reported earlier this week that the chiefs instead want N$8 trillion paid over 40 years and a pension fund for the affected communities.

Amos Kandjou, the secretary general of the Mbanderu Youth Association in Botswana told The Namibian this week that they want to benefit.

"We have realised that the negotiations and the envisaged reparations are confined to the citizens of Namibia and have excluded those in the diaspora. We too should benefit, so we feel treated unfairly by that German government. They should be inclusive," Kandjou said.

Kandjou said they have a committee, called 'Botswana Society for Nama, Ovaherero and Ovambanderu - established to represent their interest but the Namibian government refuses to acknowledge it.

"We are treated unfairly. We take note of a trend where the genocide and reparations statements only mention the two communities. It cannot be ignored. It will give the public an impression that Ovambanderu people didn't suffer," Kandjou said.