Ethiopians Protest in the Wake of US Sanctions 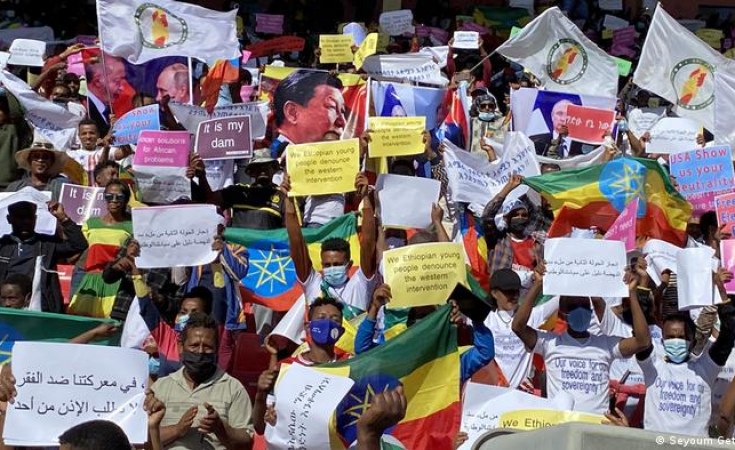 Thousands of Ethiopians demonstrated against new US sanctions this week. The US announced visa restrictions in response to the ongoing Tigray conflict. Observers fear relations between the countries have hit rock bottom.

"We Ethiopians do not need outside interference: We are and will remain a sovereign country," a young man said during protests in Ethiopia's capital, Addis Ababa, on Sunday. Such slogans as "We will never give way to America" and "Ethiopia's sovereignty is at stake" could be seen displayed on posters.

Over the weekend, thousands of mostly young demonstrators took to the streets of Ethiopian cities and the Italian capital, Rome, which is home to a large Ethiopian diaspora. As well as sharply criticizing US President Joe Biden, the protesters praised Russian President Vladimir Putin, Turkish President Tayyip Erdogan and Chinese President Xi Jinping.

Worku Yakub, a professor of social anthropology at Wachemo University in southwest Ethiopia, is critical of these expressions of praise, describing them as a naive attempt to pit the different world powers against one another.

"The posters that glorified these autocrats were individual actions that do not speak for the majority of the Ethiopian population," he told DW.

The youth wing of Prime Minister Abiy Ahmed's ruling Prosperity Party had officially called for the rallies following the announcement a week earlier that the US government would be imposing visa restrictions.

According to US Secretary of State Antony Blinken, the punitive measures are targeted at current or former Ethiopian and Eritrean government officials, members of the security forces, and members of the Tigray People's Liberation Front (TPLF). He also announced cuts in economic and security aid to Ethiopia, prompting another demonstration in front of the US embassy in Addis Ababa on Monday.

Ethiopian government troops launched an offensive against the TPLF in November. Throughout the conflict, soldiers from neighboring Eritrea also marched in. Among other serious accusations, they are alleged to have carried out massacres against the civilian population and committed sexual violence against women.

Despite appeals for peace, the conflict continues over six months after the initial assault by Ethiopian federal troops. As a result, tens of thousands of civilians have been forced to flee, while experts are now warning of an impending humanitarian catastrophe.

Ethiopia's government has described the US's actions as "misguided" and "regrettable." The Foreign Ministry tweeted a statement saying the government would not be deterred by the sanctions.

Ethiopia's ambassador to Germany, Mulu Solomon Bezuneh, is also critical of the US's decision. She told DW that, though the country still attaches great importance to relations with the United States, "the Ethiopian government will not submit to external pressure to enter into negotiations with the TPLF."

"The Tigray conflict is and will remain an internal Ethiopian matter, and our government will never allow itself to be dissuaded from this," she said.

Yelekal Getnet, a board member of the opposition Ethiopian Democratic Party, told DW that the government should solve the country's problems, especially the Tigray conflict, instead of complaining about foreign interference.

"He (Abiy Ahmed) tried to shift the direction towards Russia, Turkey, and China, but I don't think that this is a wise strategy for our country and in the interests of our region," he told DW.

After Abiy Ahmed was elected Prime Minister in April 2018, relations between the US and Ethiopia initially improved. When he was awarded the Nobel Peace Prize in 2019, the US welcomed the decision. The two countries have also forged stronger economic ties: In 2019, Ethiopian exports to the US were worth around $500 million (€410 million), almost as high as exports to China, Ethiopia's most important trading partner.

But in the wake of the ongoing Tigray conflict and US sanctions, observers, including the former US ambassador to Ethiopia, David Shinn, fear this strong relationship has been damaged.

"The relationship between the US and [Ethiopia and Eritrea] will go through difficult times in the weeks ahead unless significant progress is made in resolving the humanitarian problem in the Tigray region."

Azeb Tadesse-Hahn contributed to this article.