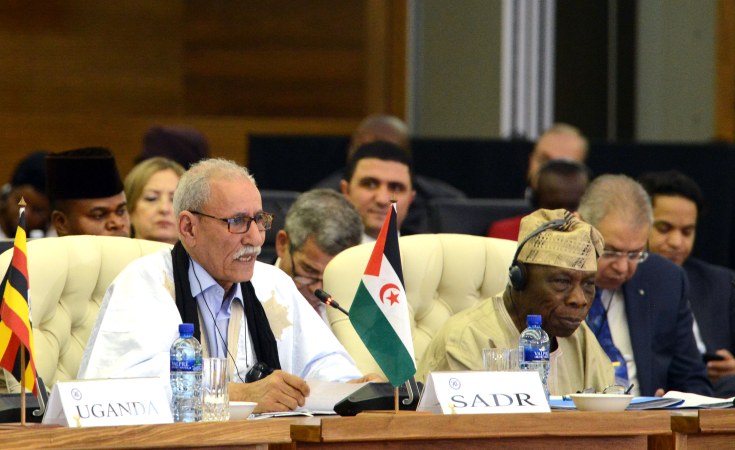 DIRCO/GCIS/Flickr
Brahim Ghali, the leader of the Polisario Front, left, at the Southern African Development Community (SADC) Solidarity Conference with the Western Sahara held in Pretoria in 2019.
Deutsche Welle (Bonn)

Brahim Ghali left Spain for Algeria where he has been taken to a military hospital to continue his recovery from COVID-19. Algeria's president was quick to pay him a visit.

The leader of the Western Sahara pro-independence movement, Brahim Ghali, landed in Algeria on Wednesday after leaving Spain where he had been receiving treatment for a severe COVID-19 infection, agencies reported.

Ghali, who is seeking independence from Morocco, had been staying in a hospital in northern Spain for six weeks.

He left the same day that a Spanish court questioned him about claims of human rights abuses, terrorism and torture.

The judge found no reason to hold Ghali or prevent him from leaving the country.

Algeria reaffirms its support for Ghali

Upon arrival in the Algerian capital, the 71-year-old Polisario Front leader was taken to the Ain Naadja military hospital to continue his recovery.

Tebboune said it was his "duty" to visit the ailing rebel and repeated his support for the Western Saharawi independence movement.

Algeria is the main backer of the Polisario Front that has been locked in a decadeslong battle with the Moroccan state over who controls resource-rich, but largely desert territory of Western Sahara.

Diplomatic relations on the rocks

Ghali was transported to Spain in mid-April after falling critically ill. He was flown in from Algeria where many Western Saharawi refugees live.

Spain accepted the leader as a humanitarian act, but this triggered a diplomatic spat with neighbor Morocco that came to a peak when Morocco allowed thousands of refugees and migrants to cross into the Spanish enclave of Ceuta on the North African coast.

Morocco annexed the territory of Western Sahara -- which is larger than Great Britain -- in the 1970s after Spain ended its colonial occupation.

The pro-independence movement has long been trying to free the self-declared Sahrawi Arab Democratic Republic from the Moroccan kingdom.