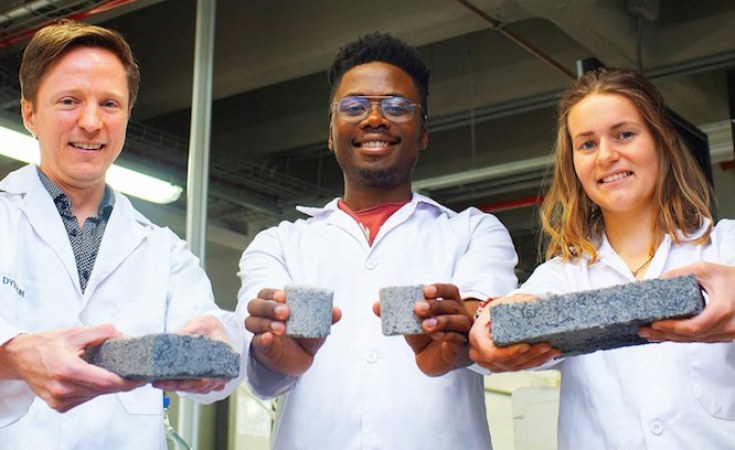 UCT News/CC BY-ND 4.0
The world’s first bio-brick made using human urine was unveiled at UCT. In picture are (from left) the Department of Civil Engineering’s Dr Dyllon Randall and his students, Vukheta Mukhari and Suzanne Lambert.
University of Cape Town (Cape Town)

The University of Cape Town's (UCT) Associate Professor Dyllon Randall has won the South African Institution of Chemical Engineers (SAIChE) 2021 Innovation Award for a project on the development of a fertiliser-producing urinal and urine bio-brick process.

Dr Randall is a chemical engineer by training and is currently an associate professor in water quality engineering in the Department of Civil Engineering.

The nomination cites Randall's and his team's development of an innovative fertiliser-producing urinal and process for producing a building material using urine as a resource with sand and lime. The process involved the collection of urine, stabilising it by keeping the urea in solution, and passing it through a reactor mould.

The reaction involved the precipitation of calcium carbonate, which cemented aggregate particles together in the shape of a bio-brick.

"We are indeed proud of him as a real shining role model to inspire other young professionals to excel."

In his congratulatory message Mazema said, "As a long-standing member of the Institution of Chemical Engineers (IChemE), I first read about Dr Randallʼs fascinating work, which was truly innovative, and for which he received the prestigious international Sir Frederick Warner Award from IChemE.

"I was really thrilled to see that one of our UCT alumni and SAIChE member had been the first African to win one of the IChemE suite of awards, and when SAIChE called for nominations for the Innovation Award, I promptly called Dr Randall to ask his permission to nominate him.

"The rest is history," he added. "The SAIChE exco and council unanimously elected him because he exceeded all three qualifying conditions/criteria. We are indeed proud of him as a real shining role model to inspire other young professionals to excel."

Work is proceeding to optimise the production process to improve the bio-bricks' compressive strength to exceed that of clay baked bricks and cement bricks. Both have very high carbon footprints. The economic feasibility of the bio-bricks is also being investigated as a replacement building material.

The nomination also mentioned the fertiliser-producing urinal developed by Randall and his team, which collected the urine needed for this process, reducing waste. The nomination said that other attractive aspects of the process are the by-products that consist of an aqueous stream rich in valuable nitrogen, phosphorus and potassium. These are valuable agricultural resources as nutrients for plants.

Phosphorus, a major chemical component of urine, is particularly important as it is becoming an increasingly depleted resource. Recycling the phosphorus would extend its availability as an ingredient of the fertilisers that are key to meeting the increased demand for food production from a growing world population.

Removing urine from sewage would also reduce the load on sewage plants. As such, this zero-waste process meets multiple Sustainability Development Goals and forms an important element of the circular economy.

In making their decision, the judging panel noted that the project, backed by a wealth of published and documented evidence, was both novel and addressed critical social needs.

Randall will receive the award later this year.

"The award illustrates that we can think differently about systems that we take for granted ... "

"This award means a great deal to the work we are doing in the wastewater and resource recovery space," said Randall. "I have been blessed with incredible students and our work continues to inspire the next generation of engineers. I hope the award illustrates that we can think differently about systems that we take for granted so that a more sustainable and equitable future is achievable."

Randall said they are currently working on optimising the process, utilising other waste material such as mine tailings.

Tagged:
Copyright © 2021 University of Cape Town. All rights reserved. Distributed by AllAfrica Global Media (allAfrica.com). To contact the copyright holder directly for corrections — or for permission to republish or make other authorized use of this material, click here.