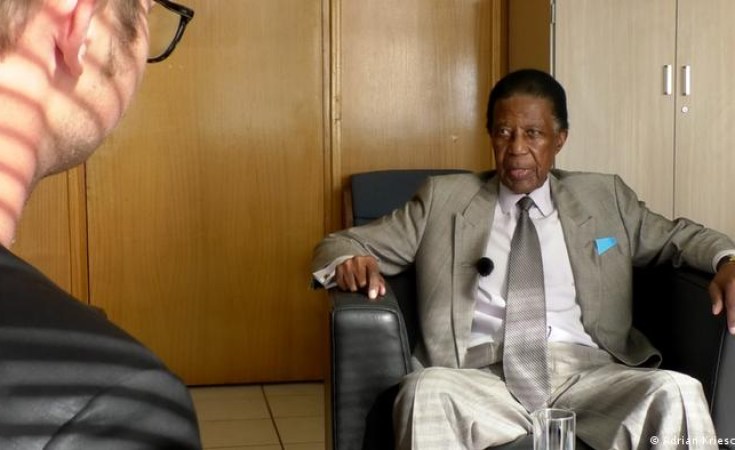 Germany's compensation offer to apologize for the colonial-era genocide against the Herero and Nama people has been rejected by some chiefs. Despite criticism, Namibia's top negotiator told DW the deal will go ahead.

Namibia's top negotiator told DW he expects the reconciliation agreement proposed by Germany to recognize colonial-era massacres as genocide to be signed as planned.

The comments come amid pushback from some traditional chiefs, who are calling for further negotiations on the deal.

Last week, Germany formally recognized the genocide against the Herero and Nama people committed by colonial troops at the beginning of the 20th century.

What did Namibia's chief negotiator say?

Zed Ngavirue, the chief negotiator for the Namibian government, expressed confidence in the deal, which he expects to be formally approved.

"I'm satisfied that we arrived at a common understanding, which we expect to be signed by all responsible ministers," Ngavirue told DW.

"Our objectives were three: acknowledgment of genocide, apology and payment of reparations. It has just taken longer than we expected. We were looking forward to the day on which we could reach this kind of consensus and agreement," he added.

Ngavirue also defended the amount of financial aid agreed under the deal, which has been a point of contention with some ethnic leaders.

"The damage that we suffered is incalculable. Loss of life, loss of land, loss of stock, slave labor and so on. When you are negotiating with another party, you want to know what is realizable," he said.

"We would have liked to have had more, but after five years, it has been demonstrated, this is what it seems to them affordable -- financially, politically," he said.

Where do community leaders stand?

On Thursday, the Ovaherero/OvaMbanderu and Nama Council said it would accept the German government's compensation offer, but think it could be improved, the Associated Press reported.

"We resolved to accept this offer because what is paramount to us is not the amount of money we are getting from the German government but the restoration of our dignity," said Gerson Katjirua, the head of the council which includes 21 tribal chiefs.

Earlier this week, Herero and Nama leaders in the Council of Chiefs released a statement rejecting the German government's proposal. They slammed the financial aid as an "insulting amount" and "an affront to our existence."

What is in the agreement?

Under the deal, the German government agreed to recognize the colonial-era massacre of the Herero and Nama people as genocide and to offer compensation.

Berlin agreed to give €1.1 billion ($1.3 billion) over a 30-year period in development projects to the communities of the descendants of the massacre.

The money is intended to be used for infrastructure, health care and training projects.

Some traditional chiefs have called for new negotiations as the financial aid was not tied to direct reparations.

What happened during the genocide?

The German Empire was the colonial power in what was then called German South West Africa from 1884 to 1915.

During that time, its military forces brutally put down several rebellions, killing tens of thousands of people.

German General Lothar von Trotha, who was sent to quell a Herero uprising in 1904, was particularly known for his extreme ruthlessness.

Chiefs Divided Over Draft Agreement Between Namibian and German Govts

Germany's Genocide Apology, Settlement Divides Namibians
Tagged:
Copyright © 2021 Deutsche Welle. All rights reserved. Distributed by AllAfrica Global Media (allAfrica.com). To contact the copyright holder directly for corrections — or for permission to republish or make other authorized use of this material, click here.