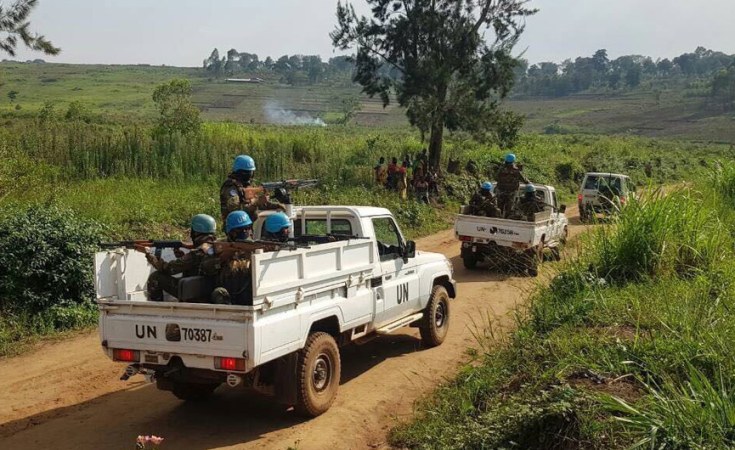 United Nations
Peacekeepers from the UN Organization Stabilization Mission in the Democratic Republic of the Congo (MONUSCO) on patrol in the Irumu Territory, Ituri, to deter MILITIA activities.
Deutsche Welle (Bonn)
analysis By Isaac Mugabi

In Africa, foreign military interventions are in the spotlight for failing to end conflicts at the continent's hotspots. Both internal and external political interests are contributing factors.

Military interventions under the United Nations banner are deployed to deal with armed conflicts on the continent. However, despite having superior weapons compared to armed groups scattered across Africa, these UN missions have failed and continue to fail dismally on their mandates.

In countries like the Democratic Republic of Congo (DRC), South Sudan, Mali and the Central African Republic, peacekeepers find themselves having to deal with different political and cultural situations they often don't understand. There are also vested interests that often work against the UN mandate.

For example, in 1999, when the United Nations Organization Stabilization Mission in the DRC (MONUSCO) was founded, it was tasked with neutralizing armed groups, reducing the threat posed to state authority, and civilian security space for stabilization activities.

But to date, South and North Kivu regions remain lawless with dozens of marauding militias who continue to kill, rape young women and girls, maim, and terrorize innocent civilians.

"MONUSCO has been a slow learner, and it has taken the UN quite a long time to work out how to do peacekeeping in Congo," Phil Clark from SOAS University of London told DW.

"It has struggled to maintain cordial relations with the government in Kinshasa and instead cautiously aligned itself with the Congolese army, even when the army has been committing atrocities against the civilians," he said.

Such relations between the peacekeepers and the Congolese government have created bad blood amongst the local populations who don't see MONUSCO as a neutral actor in a somewhat volatile situation.

In April, hundreds of young people, for several days, protested in the towns of Beni and Goma, demanding the departure of MONUSCO for its failure to stop the bloodshed in the region.

"Peacekeeping missions in Africa face new challenges every day that they didn't anticipate," said Henrik Maihack, who heads the Africa department at the Friedrich Ebert Stiftung. "And because of the political will of the contributing country - it may be difficult for them to engage armed groups directly."

Clark, who has researched the DRC for the last twenty years, says there's a general perception in eastern Congo that it is better to have MONUSCO there even though it hasn't done so much because of fear of what could happen if they were to leave.

"MONUSCO may have been able to minimize some of the violence against everyday civilians but has been slow to react when there have been massacres and attacks to particular communities like the Banyamulenge [a name that describes a Tutsi community in the southern part of Kivu]."

That view is echoed by David Zounmenou, a senior researcher at the Institute of Security Studies in Pretoria, South Africa. "The UN mission is there to work with the Congolese people and the authorities to bring about security in the country," he told DW. "However, the challenge is that most of the political elite in the DRC were produced by the rebel groups, and to an extent, they still maintain close relations with their former groups to use them for political pressure," Zounmenou added.

Some of the Congolese political elites also benefit from the activities of the armed groups in terms of natural resource exploitation to maintain their political status.

Whenever there's a conflict brewing in Congo, MONUSCO is always the last to know about it - and its interventions have tended to be very slow and often relatively ineffective. With an arsenal of modern weapons, the UN mission has also failed to engage the most notorious militia group in North Kivu province, the Allied Democratic Forces (ADF).

ADF fighters make up just one of the 122 armed groups tallied in the country's east by the respected Kivu Security Tracker monitor, but they are by far the bloodiest. In March, Washington listed them as a terrorist group with ties to the jihadist Islamic State (IS) group.

The dark chapter of sexual abuse

"There were accusations leveled against Bangladeshi and South African peacekeepers in North and South Kivu, and it was a huge concern for local populations," Clark said.

"Suppose perpetrators of sexual offenses among UN peacekeeping forces are not investigated and brought to account. In that case, that sends a message both to them and to everyone involved in the operations that these are acceptable offenses," she said. However, the UN was more concerned about its reputation of peacekeeping and not the victims, she added.

Several multi-national mining companies in Congo continue to push the UN to renew MONUSCO's mandate - and there are signs that it will not end anytime soon.

Ideally, MONUSCO's scattered bases are meant to protect civilians - but they are there partly to watch over foreign interests as well. According to Clark, "these missions also create lucrative business deals for troops from countries like Tanzania and South Africa."

Foreign interests are also at play in the Central African Republic (CAR). The UN Multidimensional Integrated Stabilization Mission (MINUSCA) has been deployed to protect the government in the capital Bangui from being overrun by rebels.

Since 2018, Russia has openly supported the current president Faustin-Archange Touadera's government, which only controls about one-third of an impoverished country wracked by partisan and communal strife. In return, Russian companies have gained access to mines under government control.

Under a bilateral defense accord, Russian paramilitaries from the Wagner Group, a shadowy private military company, operate in the CAR. Their official status is to train the country's army. They were joined last December by hundreds of other Russian paramilitaries, along with Rwandan troops, who played a key role in thwarting a rebel advance on the capital Bangui ahead of presidential elections.

However, UN experts in March had sounded the alarm about allegations of "major rights violations" by Russian forces sent to shore up the CAR's beleaguered armed forces. At the same time, Ange Maxime Kazagui, a government spokesman released a statement detailing the abuses. The allegations include arbitrary andextrajudicial executions, torture, sexual violence, cruel, inhumane and degrading treatment (and) arbitrary arrest, his statement said.

"So, you have a peacekeeping mission having to operate alongside troops from France and Russia with their own interests in CAR," Clark said.

Where is MINUSMA headed after Mali's latest coup?

Despite the presence of foreign troops on the ground, the political situation in northern Mali, where Islamist groups are active, remains dire. France has some 5,000 troops deployed across Africa's arid Sahel region as part of its anti-jihadist force Operation Barkhane, while smaller German contingents participate in the UN MINUSMA peacekeeping mission and an EU mission to train Malian soldiers.

Paris first intervened in Mali in 2013 at the request of the government to help quell a jihadist rebellion that broke out the previous year. However, the brutal insurgency is still raging in the vast nation of 19 million people and has spread to neighboring Burkina Faso and Niger.

In an interview with the Journal du Dimanche newspaper, Macron said that Paris "could not stay by the side of a country where there is no longer democratic legitimacy or a transition."

Mali coup leader Assimi Goita had fired the president and prime minister of a transitional regime in late May. Macron also warned that France would withdraw its troops from Mali should the country lurch towards radical Islamism under Goita's leadership.

Choguel Maiga, an opposition leader who is tipped to become the new prime minister, has close ties with the influential imam Mahmoud Dicko. Both men and most of Mali's political elite favor dialogue with Mali's jihadists to stem the bloodshed in the country -- a policy long opposed by Paris. Ultimately, the goal of France, Germany, and the UK deploying troops in the Sahel region is to prevent Islamists from crossing over to Europe.

The biggest concern about peacekeeping in Africa is that it hasn't improved in the past 25 years. The missions seem to be wrapped up in economic interests rather than protecting local populations. Until the whole peacekeeping system is overhauled to serve the people's interests and operate strictly under the terms of their mandates, local populations in Africa's hotspots will remain at the mercy of militia groups and other warring factions.

Kenya's Economy Joined at The Hip With China - Report
U.S., Canada and Africa