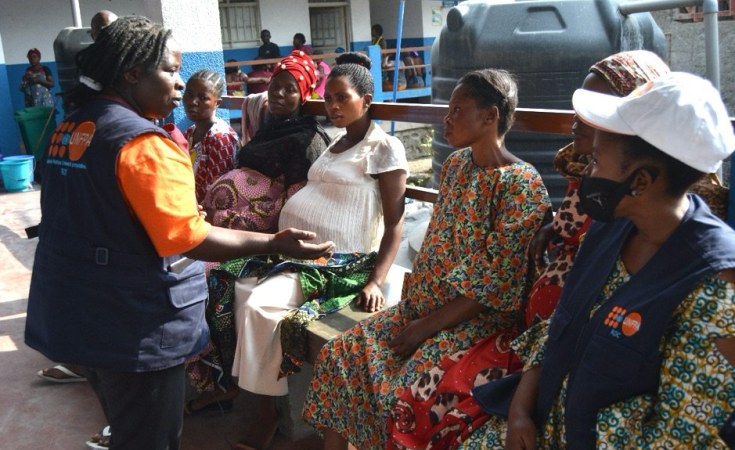 North Kivu, Democratic Republic of Congo — Following the eruption of the volcano, Mount Nyiragongo near Goma, tens of thousands of women and girls are in urgent need of critical sexual and reproductive health services, including support to pregnant women, newborn babies and survivors of sexual and gender-based violence (GBV).

More than 400,000 people, including 88,000 women of childbearing age and 12,200 pregnant women, fled Goma, a city with a population of around two million, to seek refuge in Sake and Rushuru territories, according to the North Kivu province government. Others were displaced to Bukavu in South Kivu province. More than 25,000 people crossed into Rwanda, where a temporary camp was set up at Rugerero in the district of Rubavu.

The United Nations Office for the Coordination of Humanitarian Affairs (UN OCHA) estimated that 31 people died as an indirect result of the eruption and a further 40 were reported missing. For years, the people of Goma and surrounding villages have lived under the threat of volcanic activity from Mount Nyamuragira and Mount Nyiragongo, ranked among the world's most dangerous volcanoes. Seventeen villages in the territory of Nyiragongo were affected by the lava flow, which destroyed homes and infrastructure. Also destroyed were three health facilities, causing health system disruptions and affecting access to critical sexual and reproductive health services, including critical maternal health services.

Theophane Patinvoh / UNFPA DRC
At Kyeshero Hospital, UNFPA provided delivery kits for women giving birth and for the midwives attending to them, as well as sexually transmitted infection treatment kits, and dignity kits with essential items for women and girls.

Many of the humanitarian actors and civil servants have relocated from the 'red zones' - Majengo, Mabanga Nord and Sud, Virunga, Bujovu, Murara, Kahembe, Mikeno, Volcano and Mapendo - reducing the response capacity on the ground.

The displaced population in Sake is at risk of armed groups, as the Masisi territory is known for frequent clashes between the Forces Armées de la République Démocratique du Congo (FARDC) and militia groups, and it also has North Kivu's third highest number of GBV cases. In times of crisis, women and girls' vulnerabilities are heightened, leaving them at greater risk of sexual and gender-based violence. North Kivu province, of which Goma is the capital, recorded 14,681 cases of GBV in 2020.

UNFPA, the United Nation's sexual and reproductive health agency, is working with the local authorities and partners, including the Ministry of Health, to address the sexual and reproductive health of the affected population. Following a rapid assessment of the situation in Sake and Goma, in which premature deliveries and maternal deaths were noted, UNFPA handed over reproductive health supplies to government officials at Kyeshero Hospital for the benefit of those affected in Nyiragongo Health Zone, particularly Kibati, Kanyarucinya and Turunga, including a reception centre for displaced people. Items provided include individual delivery kits for women giving birth and for the midwives attending to them, sexually transmitted infection treatment kits, and dignity kits with essential items for women and girls. The donated items will cover the reproductive health needs of 150,000 people for three months at a cost of US$60,000.

In preparation for an increase in GBV cases due to the population movements, UNFPA is strengthening the capacities of health centres and providing other basic services to facilitate multi-sectorial management of an anticipated 1,760 GBV survivors.

Next Story
Tagged:
Copyright © 2021 UNFPA East and Southern Africa. All rights reserved. Distributed by AllAfrica Global Media (allAfrica.com). To contact the copyright holder directly for corrections — or for permission to republish or make other authorized use of this material, click here.