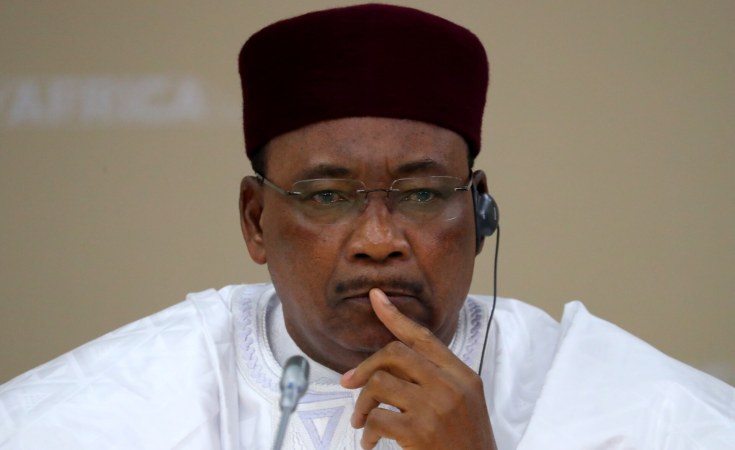 H.E. Mahamadou Issoufou, the former President of Niger, was honoured today as the recipient of the 2020 Ibrahim Prize for Achievement in African Leadership in a special Leadership Ceremony held during the 2021 Ibrahim Governance Weekend.

Speaking from Niamey to a global audience via MIF.Live , President Issoufou said: "I was moved and proud to be chosen by the Ibrahim Prize Committee. Through me, all the Nigerien people have been honoured. I thank President Festus Mogae and the members of the Prize Committee for choosing my modest person. I salute and congratulate Mo Ibrahim and the Mo Ibrahim Foundation for the comprehensive support they provide to the development of our continent.”

The Ibrahim Prize is a US$ 5 million award that recognises and celebrates excellence in African leadership. It ensures that the African continent benefits from the experience and wisdom of exceptional leaders once they have left national office, by enabling them to continue to contribute in other civic roles.

Outlining the decision to make President Issoufou an Ibrahim Prize Laureate, H.E. Festus Mogae, Chair of the independent Prize Committee and former President of Botswana, said: “President Issoufou made history in Niger. He paved the way for Niger’s first-ever democratic transition of power. His example shows that those who lead, whatever the challenges, can do so with the greatest reverence for both the citizens they serve and the rule of law.”

President Issoufou was congratulated by leaders from around the world.

H.E. Mohamed Bazoum, President of Niger said: “During his ten years in office, President Issoufou remarkably stabilised the institutions of our Republic, strengthened the foundations of our economy, brought about a reduction in poverty, and provided real opportunities for the future of his country. I would like to say to the members of the Ibrahim Prize Committee that, in addition to the qualities that you have identified through his governance and leadership, President Issoufou’s moral and human qualities also make him an exceptional man.”

António Guterres, Secretary-General of the United Nations said: “The awarding of this prestigious Prize to President Issoufou is a testament to his efforts as a champion of sustainable development, democratic consolidation, peace, stability, human rights and gender equality. Niger’s growing role in the international community, as a valued partner of the United Nations, was built on President Issoufou’s commitment to regional and international cooperation and consensus building.”

H.E. Moussa Faki Mahamat, Chairperson of the African Union Commission said: “Mahamadou Issoufou’s commitment to the development and well-being of his compatriots is known to all. We will remember his relentless fight against terrorism, for peace and stability in the Sahel. We were all impressed by his strong advocacy as a champion for the success of the African Continental Free Trade Area.”

Mo Ibrahim, Chair of the Mo Ibrahim Foundation said: “I am proud to see President Issoufou recognised as an example of exceptional leadership and I hope his legacy will inspire generations of African leaders to come. President Issoufou, I offer you my heartfelt congratulations and a warm welcome to the Foundation family.”

The Leadership Ceremony is part of the 2021 Ibrahim Governance Weekend, which is usually held in a different African country each year but is being held virtually in 2021 due to COVID restrictions.

At the heart of the weekend is the Ibrahim Forum, which brings together a powerful coalition of African and global leaders to discuss an issue that is critical to the continent’s future. The 2021 Ibrahim Forum is discussing  COVID-19 in Africa One Year On: Impact and Prospects , a new report from the Mo Ibrahim Foundation analysing the health, economic, social and political impacts of the pandemic, and highlighting key avenues for the continent's recovery.

Next Story
Tagged:
Copyright © 2021 Mo Ibrahim Foundation. All rights reserved. Distributed by AllAfrica Global Media (allAfrica.com). To contact the copyright holder directly for corrections — or for permission to republish or make other authorized use of this material, click here.