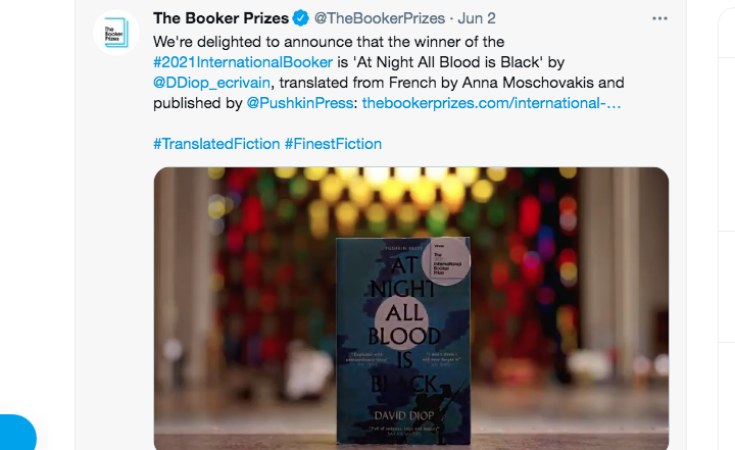 The French-Senegalese  writer and academic David Diop has taken home the International Booker Prize for a novel translated into English from another language.

At Night All Blood is Black , a novel by French-Senagalese writer David Diop, translated from French by Anna Moschovakis, has won the International Booker Prize. The author and translator will receive £50,000 (€58,000/$71,000). The prize was presented at the Coventry Cathedral in the UK City of Culture 2021.

"I am at once flattered and I sort of feel as though I am living in a dream — a waking dream," said Diop, an author and academic who in 2018 won one of France's major literary prizes, the Prix Goncourt des Lyceens, for his novel Frere d'ame. He is the first French and the first African writer to win the prize.

Translator Anna Moschovakis quoted writer and translator John Keane to affirm the principle of cultural diversity that is central to the International Booker. "What does it mean to be together without being the same, to fully accept the idea of difference," she said.

All the judges read all the 123 books written in dozens of languages entered for this year's prize before a shortlist of six was announced in April.

The Booker Prizes Tweeted out the news of the latest winner.

The novel tells the story of Senegalese men from the countryside who are enlisted to fight for France on the Western Front during World War I. After Alfa is left alone in the trenches to witness the carnage, he throws himself maniacally into combat and descends into madness. This powerful meditation on the French colonial experience was an attempt to use literature to "mov[e] people before they turn to rational explanations of history," Diop told The New York Times.

With previous winners including the 2018 Nobel literature laureate, Olga Tokarczuk, the International Booker Prize has become a high watermark for emerging literary talent globally that has been published in English.

This was a year in which new hybrid genres combined essay and memoir with fiction and history writing in novel new ways.

"This is a fantastically vigorous and vital aspect of the way fiction is being written at the moment," said jury chair Lucy Hughes-Hallett, a cultural historian and novelist. "People are really pushing the boundaries while working in so many different modes."

Benjamín Labatut's short-listed novel, When We Cease to Understand the World, translated from Spanish by Adrian Nathan West, employs another unusual combination of literary genres.

Using epochal moments in history to merge fact and fiction, to explore genius and insanity, the book's surreal vignettes include Albert Einstein opening a letter sent from the Eastern Front during the Great War that offers a solution to the theory of general relativity — though it contains a bug that could undo his life work. Meanwhile, Erwin Schrödinger and Werner Heisenberg alternatively struggle to create the ultimate theory of quantum mechanics, a fight with universal consequences.

"It's both moving and really intellectually demanding," the author and editor Aida Edemariam said of The Employees: A Workplace Novel of the 22nd Century by Olga Ravn, translated from Danish by Martin Aitken. "It asks some really big questions and it pulls it off without making a big song and dance about it."

Set in the near-distant future on a spaceship millions of kilometers from Earth, the titular employees or ship crew consist of humans and humanoids who alike begin to long for the intimacy of lives on their home planet that are only retained in memory. Presented as witness statements given to a workplace commission, Ravn's novel critiques lives governed by work and productivity.

Early reviews have been promising. "An audacious satire of corporate language and the late-capitalist workplace, and a winningly abstracted investigation into what it means to be human," said The Guardian.

Piecing together the past

In Memory of Memory, by Russian author and poet Maria Stepanova, used old photographs, postcards, letters, diaries and souvenirs from across a century of a Russian Jewish family's life to explain how members survived persecution and repression. Following the death of her aunt, Stepanova assembles these family artifacts to explain the gaps and contradictions of the past, and engages writers like Roland Barthes, W.G. Sebald, Susan Sontag and Osip Mandelstam along the way in a work that combines essay, historical fiction, memoir and travelogue.

"It's like nothing we have read before it," Indian author and International Booker judge Neel Mukherjee said. "It creates its own form as it goes along."

'A blazing fire of a book'

Also making the short list was The Dangers of Smoking in Bed by Mariana Enriquez, and translated by Megan McDowell from Spanish.

Set in contemporary Argentina, the novel's grab bag of teens, witches and ghosts populate a narrative that veers between gritty urban realism and schlock horror, sexual fetishes and feminism. "A story of the ghosts of the world that haunt cities," in the words of McDowell, the novel is ultimately empathetic to a society riddled with fear and anxiety.

Inspired by recent populist protest movements in France, including the yellow vests, Eric Vuillard's The War of the Poor returns to the peasant uprisings in 16th-century Germany, a tale told via the complex life of rabble rousing preacher Thomas Müntzer. Hughes-Hallett called it "a blazing fire of a book. It is furious, beautiful, full of energy. It actually feels dangerous."