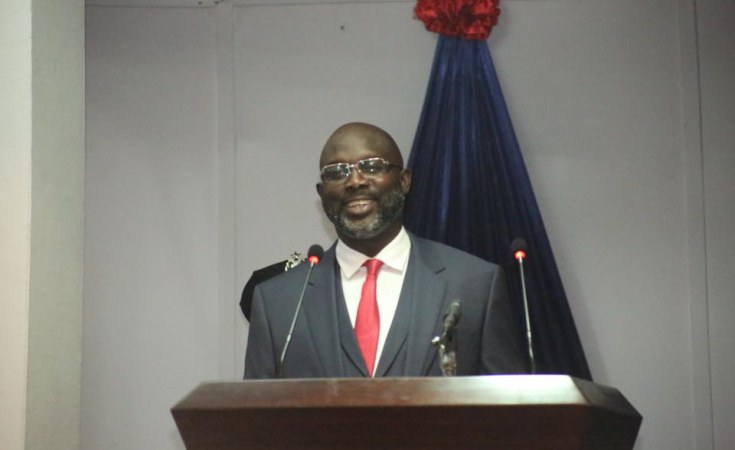 The President of the Republic, Dr. George Manneh Weah, has finally taken his nationwide tour to the northwestern province of Lofa following multiple postponements during to pressing national and international engagements.

The President had made rounds in the countryside, meeting and greeting and dialoguing with citizens. He has touched 13 other counties since February this year before arriving in Lofa County on Thursday, June 3, 2021.

At Belefanai, a major town in Bong County on the flank of the St. Paul Bridge that separates Bong and Lofa, swamp of citizens along the corridor signaled success for the President's visit to the county.

Students, traditional leaders, mothers and fathers in adjacent towns of Bong County had trekked long distances to see the President off to Lofa County.

The presence of Vice President Jewel Howard Taylor along, with other local county authorities, added enthralling flavor to the farewell ceremony on Bong County side of the Bridge before the President and entourage stormed Lofa County.

Following a brief traditional farewell ceremony, the President walked across the boundary and received mammoth rousing reception by throngs of citizens headed by the local authorities led by members of the Lofa Legislative Caucus.

Few minutes into Lofa, nicknamed the breadbasket of Liberia, President Weah got the ball rolling with his citizens' interaction engagement or town hall meetings.

As he has been doing, President Weah hailed citizens of Salayea, yea the people of Lofa, for voting him into power three years ago.

The Liberian Chief Exective told the jubilant citizens he and his entourage were in the county to tell them thank you and also hear from them on the challenges they are faced with and how the government could make interventions.

"I am happy to be in Lofa, in Salayea District. Lofa is part of the fifteen counties," the thrilled President said.

He said he was impressed with the excellent work the people of Lofa have done and continue to do, adding "You are a strong and resilient people."

The President told Salayea citizens that Lofans were extremely doing well and that there is a strong need for government to complement them in order to do more.

Responding to the many supplications put before him such a health center, market building and others, the President assured them of government's commitment to improving their conditions in spite of the mounting economic challenges Liberia is faced with.

Relative to health center, President Weah said the Ministry of Health would work with citizens to build it.

As for market building for marketers, he urged citizens to make available the land where such a structure can be built.

He used the gathering to appreciate health workers for the monumental sacrifices they are making to save lives in the county.

"I want to thank health workers for the good job they're doing here, and government will have to help them do more. We have good, hardworking and resilient people in the health sector. With the little they are doing, if you give them good facilities, they can do more," President Weah averred.

Meanwhile, citizens of Salayea have hailed the President for the countless development initiatives he has undertaken in a relatively short period of time.

"Some of us have not been to Monrovia, but we are hearing a lot good things you are doing in Monrovia and other places," remarked a traditional female leader.

President Weah also lavished praises on Vice President Jewel Howard Taylor, who is also on the Lofa trip with him, for the good job she is doing.

He said the Vice President is a smart woman who is working to impact lives and help the government achieve its objectives.

President Weah also had a town hall meeting with citizens in Zorzor at which time he recounted government's development basket for the country, mainly for Lofa County.

Tagged:
Copyright © 2021 Government of Liberia. All rights reserved. Distributed by AllAfrica Global Media (allAfrica.com). To contact the copyright holder directly for corrections — or for permission to republish or make other authorized use of this material, click here.