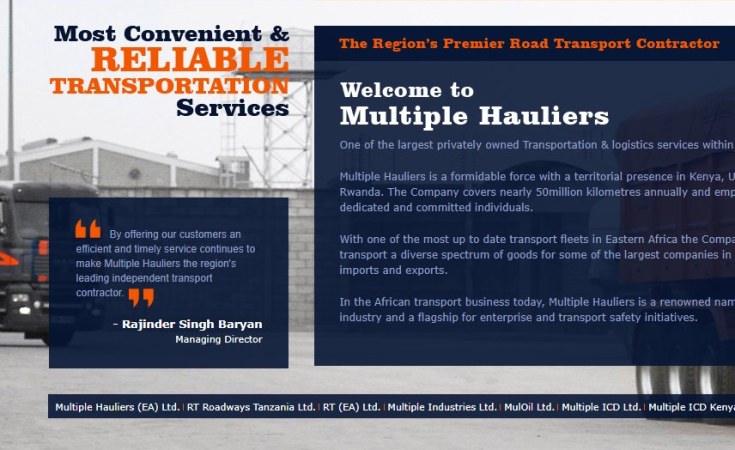 In 2017 Multiple Hauliers, one of Africa's largest privately owned logistics firms, seemed to be at its peak.

Not only was the firm's transportation arm doing well with a fleet of at least 1,500 trucks moving cargo across East Africa, but also, the distribution contract Multiple Hauliers had with luxury vehicle manufacturer Porsche was still cosy despite the sales of popular Cayenne sports utility vehicle (SUV) starting to decline.

Multiple Hauliers was at the time shopping for cheaper loans to repay some loans owed to local banks, so the transporter sought to borrow Sh14.8 billion from two consortiums.

The first consortium had South Africa's Standard Bank partner with its local subsidiary, Stanbic, and NIC Bank to lend the firm Sh10 billion.

The second loan of Sh4.8 billion was to come from Mauritius-registered equity firm Barak Fund.

While the borrowing was intended to boost the financial health of the hauler, Multiple Hauliers may have bit too much and it is now struggling to chew.

The company is facing multiple auction and insolvency attacks from several creditors -- including banks, companies and individuals.

Part of the borrowing plan was to use the credit to lower the Sh807 million owed to Prime Bank.

Court papers seen by the Nation do not indicate why, but the first loan from Standard Bank, Stanbic and NIC did not materialise.

When Barak Fund released its batch of Sh4.8 billion, Multiple Hauliers paid off Sh447 million of the Prime Bank loans, leaving a balance of Sh360 million.

The transport firm and Prime Bank then had a vicious falling-out over release of securities that had been used to borrow money.

Multiple Hauliers argues that Prime Bank should have released the Mombasa land's title deed after payment of the Sh447 million loans, as those were the only borrowings secured by the documents.

But the bank insists that Multiple Hauliers agreed to use any properties held by the lender as security for any existing loans.

With that reasoning, the lender extended the Mombasa land title deed to secure the Sh360 million loan balance.

Multiple Hauliers has now sued Prime Bank and asked the High Court to bar the lender from selling the Mombasa property.

Two years ago, businessman Mungai Kariuki claimed to still own part of the firm, and insisted that his business partners squeezed him out of the company in 1982 by sending the then police boss Noah Arap Too to threaten him.

While the Prime Bank case may look like an ordinary dispute between a borrower and a lender, for Multiple Hauliers it presents difficulty in light of a separate case before the High Court.

Multiple Hauliers insists that it owes the lender Sh299 million and that the additional amounts claimed by Synergy are illegal and unfair penalties that the court should scrap.

On September 18, 2020 Justice David Majanja suspended the insolvency petition for 12 months to give Multiple Hauliers time to put its financial affairs in order.

The transporter had argued that its assets are worth Sh19 billion hence outweigh the Sh14 billion liabilities.

The presence of the NSSF indicates that the firm may not have been remitting employees' pension dues as required by law, while the I&M's listing in the suit means it has yet another bank loan.

Multiple Hauliers is expected to present a detailed report to Justice Majanja this September, which will enable the judge to decide on whether to proceed with the insolvency petition or not.

Three months to the presentation deadline, Multiple Hauliers is facing another financial attack by a creditor and which could impact the transporter.

Should Prime Bank succeed in its bid to sell the Mombasa land, the action could significantly lower Multiple Hauliers' asset base and consequently its ability to stay afloat as a going concern.

For now, the logistics firm can sigh in relief as Justice Alfred Mabeya temporarily stopped Prime Bank from auctioning the Mombasa land until he has heard the case.

The judge held that until he has determined whether or not the Mombasa parcel was to be used as revolving security, it would be risky to allow the lender to auction the property.

"The court appreciates that once a property is pledged as security, it is amenable to be sold as it becomes a chattel to be sold in case of default. In the present case however, there is an allegation that the suit property is charged to other lenders with the sanction of the defendant," the judge said.

"That per se cannot be a basis for an injunction. However, in the present case, it is alleged that the charge in respect of which the same is proposed did not cover the facilities in question. If the sale is allowed to continue, it may jeopardise the plaintiff immeasurably. Its effort to restructure its debt with other creditors may be in jeopardy," Justice Mabeya added.

Multiple Hauliers is facing multiple auction and insolvency attacks from several creditors that has seen the transporter seek the mercy of courts to ensure its survival.

HFC filed a case seeking to have Multiple Hauliers compelled to surrender all the vehicles, as some were parked in yards outside the country.

Multiple Hauliers at the time owed HFC Sh2.1 billion, and the lender was allowed to sell the vehicles to recover part of its dues.