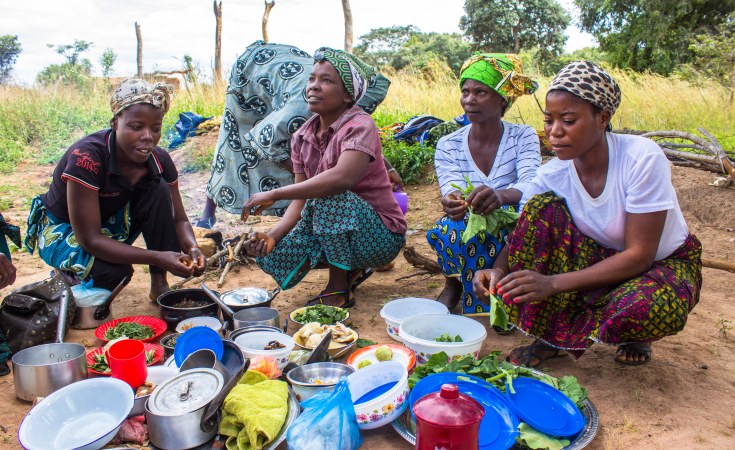 At the centre, a home-based facility, children found to be undernourished get special attention to improve their wellbeing for no payment.

"In my village, parents take turns to take care of the children," says 27-year-old Nyiramuhire. "Each day there are about five women. Each of us brings foodstuffs; potatoes, vegetables, porridge flour, soya or rice - anything you have."

It is after categorizing the child according to their nutrition status that recommendation is made on what they should be fed.

Before the ECD centre, Nyiramuhire's Karama village had 20 undernourished children, and according to Ruth Uwibogoye, a community health volunteer, but today "all children are in green; they are healthy."

Since 2018, Rwanda Biomedical Centre (RBC), the National Child Development Agency and the World Bank have been implementing an anti-malnutrition project in 13 districts with the highest rate.

At ECD centres, children are given milk and food supplements, such as porridge.

The child development programme aims at ensuring proper breastfeeding until a child turns two years and feeding a balanced diet until five years, among other things, to prepare children for primary school.

But for Solange Uwanyirigira, a Catholic nun who runs Sovu Health Centre in Huye District, the problem of stunting has various causes.

"Sometimes the mother has underfed herself, suffers an incurable illness or there are familial conflicts pressing her," Uwanyirigira says. "Therefore, those problems need to be properly understood in order to collectively malnutrition in children."

At Sovu Health Centre, malnourished children are hospitalized for one to two months. After treatment, Uwanyirigira says, the mothers contribute Rwf200 every month to buy eggs for their children, through an initiative called "Kundwa Kibondo."

The rate of stunting decreased to 33 percent in 2020, according to the latest Demographic and Health Survey by the National Institute of Statistics of Rwanda (NISR).

"The ECD programme has played a significant role in the fight against stunting," says Gaspard Habarurema, the communications officer at RBC.

Although children from vulnerable households are four times more susceptible to stunting than those in richer homes, the latter too is vulnerable. 11 percent of children from wealthier families had stunted in 2020, a fact that called for behavior change education.

Stunting has decreased by 11 percent in the last 10 years, but more effort is needed to reach a targeted 19 percent by 2024, or a 14% decrease in four years. "Programs like the ECD need support from all the stakeholders," Habarurema said.

A Pandemic of Malnutrition Calls for New Food Policies in Africa