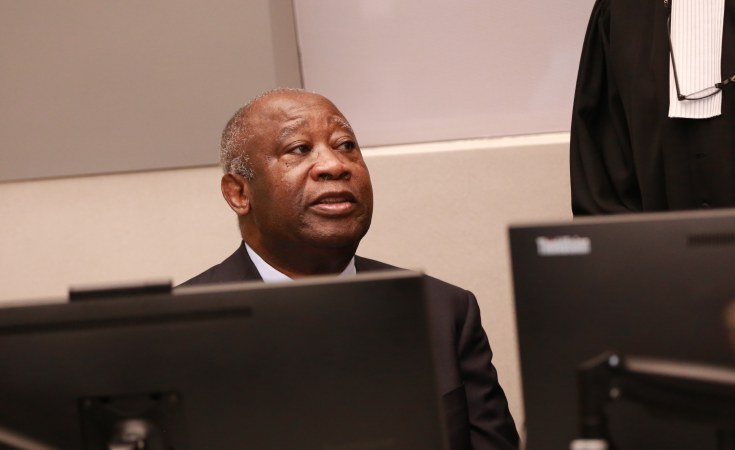 The planned return of former Ivorian President Laurent Gbagbo has been thrown into uncertainty after the government of Alassane Ouattara hinted it could be delayed, citing security concerns.

Gbagbo, who was recently acquitted by the International Criminal Court (ICC) on war crimes charges, was scheduled to return on June 17. But the government said Wednesday it wouldn't allow him back because his party didn't inform authorities in time to allow for preparations.

The government, in response, said that while the former president is still welcome in Côte d'Ivoire, he must return in a low-key manner.

Adama Bictogo, deputy parliamentary Speaker and executive secretary of ruling party Rally of Republicans (RHDP), said Gbagbo's return should be devoid of a triumphant welcome as a show of respect for victims of the country's post-election violence that led to his indictment at the ICC.

These events are indicative of the divisive nature of the country's politics. However, despite the setback from the government, the FPI has no doubt that their man will be back.

"We will do everything possible to ensure that the return of President Gbagbo is done in peace and for reconciliation," said Leon Emmanuel Monnet, chairperson of a committee set up by the FPI to plan Gbagbo's return. He was addressing party supporters at a ceremony hosted in honor of Gbagbo's 76th birthday on Monday.

It is 10 years since Gbagbo, who ran the world's top cocoa-producing country from 2000 to 2011, was shipped off to The Hague after his indictment for his role in the post-election violence that led to the country's second civil war. As the defeated incumbent candidate, Gbagbo had refused to step down.

The Ivorian government refused to hand over his wife, Simone Gbagbo, to the ICC.

Cote d'Ivoire was just emerging from its first civil war (2002 to 2007). Rebel forces, under the command of Guillaume Soro, another controversial Ivorian politician, pledged loyalty to his opponent Ouattara. Some 3,000 people died as a result of the conflict.

Gbagbo was eventually arrested at his residence in April 2011 by pro-Ouattara forces. The image of the former president being taken into custody, along with his wife Simone, continues to haunt many, especially when discussed in the context of the involvement of France in the crisis.

To this day, Gbagbo and his supporters believe French forces actually stormed the official presidential residence, arrested and handed him over to the rebels.

Firebrand in his youth

As a history professor, Gbagbo had become a pan-Africanist, much to the ire of France, which had a huge influence on the West African country's independence leader Félix Houphouët-Boigny.

Gbagbo was such a firebrand politician in his youth during Houphouët-Boigny's rule that he was regularly sent to prison. He would live in exile in France, where he taught and later formed the FPI.

But Gbagbo's critics doubt his pan-African credentials on grounds of his divisive politics at home. He inherited his predecessor President Henri Konan Bédié's controversial policy that propagated the idea of radical Ivorian nationalism, dubbed 'Ivoirite', which considered as second-class citizens Ivorians who lived in its northern region. In fact, that was the main cause of the first civil war.

Since its independence from France in 1960, Côte d'Ivoire had been run by Houphouët-Boigny, who died in office in 1993. His successor, Bédié, presided over and won what was widely considered a fraudulent election in 1995.

Bédié's administration drafted a law that was approved in a referendum immediately before the planned elections of 2000, which required both parents of a presidential candidate to be born within Côte d'Ivoire.

That law affected Ouattara, who hails from the north. One of his parents is thought to have come from neighbouring Burkina Faso.

Ouattara, a distinguished economist, had served as prime minister of Côte d'Ivoire as a protégé of Houphouët-Boigny. He also represented the country at the Central Bank of (Francophone) West African States and the International Monetary Fund.

The unrest sparked by the Bédié-era citizenship law led to a coup in 1999. The coup leader, General Robert Guei, presided over the 2000 elections, which he contested in himself. But when initial results showed he was losing to Laurent Gbagbo, Guei dismantled the electoral process, declaring himself winner.

More protests ensued, turning into an uprising that saw the general toppled from power. Clashes followed between supporters of Ouattara and Gbagbo.

Gbagbo, with the support of security forces, assumed the presidency, defying calls for fresh polls.

The violence led to a deepening division between the largely Muslim north and mainly Christian south.

Thanks to a National Reconciliation Forum established by Gbagbo, Ouattara's citizenship was restored.

But because of the civil war, elections that were supposed to be held in 2007 were deferred until 2010.

After post-election violence that saw 3,000 people were killed and 500,000 displaced following the November 2010 election where Ouattara and Gbagbo went head-to-head, the latter was indicted by the ICC alongside his estranged wife, Simone Gbagbo, who was seen as the true power behind his presidency. Also indicted was a fearless youth leader and Gbagbo loyalist Charles Blé Goudé.

Blé Goudé was later cleared by the ICC. All three of them, however, were tried at home and each sentenced to 20 years in prison. While Gbagbo and Blé Goudé were prosecuted in absentia for misappropriation of public funds, Simone was found guilty of war crimes.

However, two years later, the 71-year-old former first lady was acquitted by an appeals court. And she was also later granted amnesty by Ouattara, three years into her prison term.

Simone has managed to revive her political career over the past few years. As the second vice-president of the FPI, she commands powerful authority over the party.

Despite the domineering political influence of her husband, Simone was always a major political force in her own right. Not only did she co-found FPI with Gbagbo, she has gone through all experiences with him, including imprisonment for political activism in the opposition. She is believed to have pressured her husband to defy international pressure to step down after the election dispute.

But more importantly, Simone, during Gbagbo's presidency, was named in a number alleged extrajudicial activities. A notable charge was that she ran a death squad, which was blamed for the disappearance of French-Canadian investigative journalist Guy-André Kieffer.

The ICC's indictment against Simone included four counts of charges of crimes against humanity: murder, rape and other sexual violence, persecution and other inhuman acts. But Simone has rejected all accusations, accusing France of fabricating them as part of a campaign against her husband.

Laurent Gbagbo, who became the first Head of State to stand trial at the ICC, was first acquitted in 2019 over the failure of prosecutors to present enough evidence to convict him. At the end of last March, the ICC upheld his acquittal, paving the way for his imminent return home.

It is unlikely though that Gbagbo will run for office again. However, he is a huge asset to his party, which remains a powerful force in the Ivorian political field.

President Ouatara is currently serving his third term in office, after defying local and international opposition to review the country's laws to allow him to contest for more than two terms.

Cote d'Ivoire in the Houphouet-Boigny era, albeit a one-party system, was well known as an African model for economic growth and political stability. The country's main export was and continues to be cocoa, which fetched it a lot of much needed foreign currency.

The political unrest hurt the sector badly, thereby plunging the economy into crisis.

Under President Ouattara's leadership, Cote d'Ivoire continues to retain strong political, economic, and military ties with France, which maintains a military garrison near Abidjan, mainly to protect an estimated 20,000 French nationals living in the West African country. This continues to fuel anti-French sentiments among segments of the population.

Whether Gbabgo returns also partly depends on the status of his conviction, which the Ouattara administration hasn't clarified yet.

The president reportedly said in April, following Gbagbo's acquittal, that he was free to return, in the wake of a national reconciliation process.

Ouattara also reportedly told a cabinet meeting that his government would cover Gbagbo's travel expenses and that measures will be taken to ensure that he receives the benefits of a former president.

No matter what happens, Gbagbo's supporters see his peaceful return as a major step towards reconciliation and national unity.