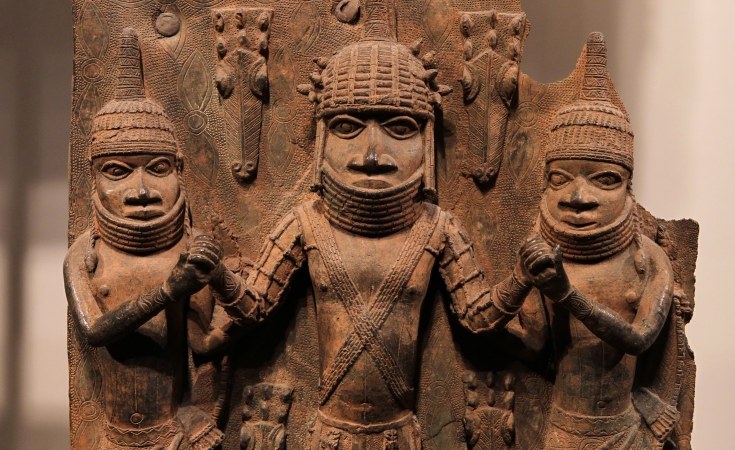 The Metropolitan Museum of Art and the Nigerian National Commission for Museums and Monuments (NCMM) announced today the return of three works of art to the Nigerian National Collections: two 16th-century brass plaques created at the Court of Benin, and a brass head produced in Ife around the 14th century. The Met initiated the returns after collaborative research conducted over the past year in partnership with the NCMM and other colleagues led to the joint determination that the works should be transferred to Nigeria.

The two 16th-century plaques produced at the Court of Benin, Warrior Chief and Junior Court Official, were among the works removed from the Royal Palace in 1897 during the British military occupation of Benin. Following that military campaign, they entered the collection of the British Museum, London, from 1898 to 1950. In 1950-51, the British Museum transferred these two plaques (and 24 others) to the National Museum in Lagos. Although they were never deaccessioned by the National Museum, the two plaques entered the international art market at an unknown date and under unclear circumstances and were eventually acquired by a New York collector. In 1991, that individual gave his collection of Benin works to The Metropolitan Museum of Art, where the works were researched, published in print and online, and exhibited internationally.

Following collaborative research conducted by The Met and the British Museum over the past year, The Met reached out to the Nigerian National Commission for Museums and Monuments to seek clarity on the status of these works, and over the course of exchanges with staff there, it was decided that the works should be returned to Nigeria. The plaques have now been deaccessioned by The Met and, according to the wishes of the NCMM's Director General, Professor Abba Isa Tijani, they await delivery to his care when he is able to travel to New York City.

The Met has additionally brokered the return of a third work to the Nigerian National Collections that it had been offered for sale: A 14th-century brass Ife Head from the Wunmonije Compound in Nigeria. The seller offering it for purchase had been under the misapprehension that legal title to the work had been granted by the NCMM. Further inquiry by The Met determined that this was not the case, and it accordingly has arranged with the seller and their agent for the Ife Head to return to its rightful home.

The Met is pleased to have initiated the return of these works and is committed to transparency and the responsible collecting of cultural property. In keeping with this commitment, The Met has posted on its website images and known provenance for all of the works of art in its collection, including those from the Kingdom of Benin, along with a number of essays to illuminate their history. The Museum is also participating in the Digital Beninproject, an international platform designed to consolidate and continue to expand documentation concerning the histories of works from Benin.

Max Hollein, Marina Kellen French Director of The Metropolitan Museum of Art, stated: "The retention of these works within Nigeria's National Collections is critical to the well-being of the museum community and to fostering ongoing cooperation and dialogue between The Met and our Nigerian counterparts. The Museum looks forward to welcoming Director General Abba Issa Tijani and to discussing how The Met can continue to support Nigeria's existing national museum network and the establishment of the Edo Museum of West African Art in Benin City, for which The Met would be pleased to be a collaborative partner."

The Minister of Information and Culture of Nigeria, Alhaji Lai Mohammed, stated: "We welcome the rapprochement developing in the museum world, and appreciate the sense of justice displayed by The Metropolitan Museum of Art. Nigeria enjoins other museums to take a cue from this. The art world can be a better place if every possessor of cultural artifacts considers the rights and feelings of the dispossessed."

The Director General of the Nigerian National Commission for Museums and Monuments, Professor Abba Isa Tijani, said: "We sincerely appreciate the transparency exhibited by The Metropolitan Museum of Art regarding issues leading to the return of these objects. The NCMM understands that there are great opportunities for collaborations of all sorts, including traveling exhibitions with many of these exquisite objects. The NCMM shall jointly with as many willing partners as possible pursue this under prospective agreements. The NCMM looks forward to a future of joint activities with The Met. We shall be working together along with other colleagues on the Digital Benin project and several other worthy initiatives to be discussed."

Tagged:
Copyright © 2021 This is Africa. All rights reserved. Distributed by AllAfrica Global Media (allAfrica.com). To contact the copyright holder directly for corrections — or for permission to republish or make other authorized use of this material, click here.