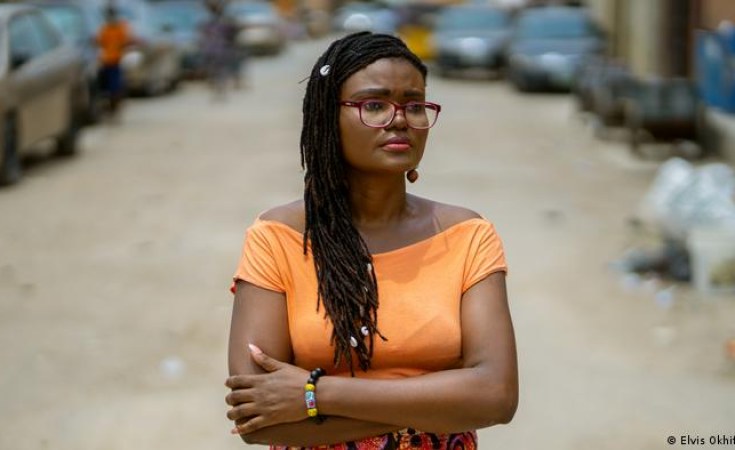 DW Freedom of Speech Award winner Tobore Ovuorie has risked her life as an investigative journalist. She talks about the long-term consequences of her exposing human trafficking, freedom of speech and her future plans.

Nigerian journalist Tobore Ovuorie has been awarded the DW Freedom of Speech Award 2021 for her outstanding commitment to human rights and freedom of expression in Nigeria. She is best known for her work uncovering a human trafficking ring in Nigeria in 2013, during which she was abused, raped and nearly killed.

"Today, we are honoring a courageous journalist from Nigeria," said DW Director General Peter Limbourg on Monday. "Tobore Ovuorie has met extreme challenges during her investigation into the trafficking of young women from Africa to Europe. She brought the fate of thousands of victims to the attention of authorities who, without the work of this brave journalist, would not have been forced to act."

When accepting her award in Bonn, Ovuorie highlighted the challenges that journalists consistently face in her country. "Being a journalist in Nigeria is difficult. We struggle for economic basis for our works and fight for access to information. We have doors slammed in our faces when we ask questions and are bullied, intimidated, arrested and imprisoned," said Ovuorie. "I can confidently say that the free press in my country and surrounding African countries, like Cameroon, is in terrible shape."

Ovuorie also urged fellow journalists worldwide to persist in their fight to expose injustice within their communities. "On no account should we let our voice be silenced. We must refuse to conform to dictatorship. That way, we will bring light into darkness and our various societies, communities, and countries will become saner, safer and better spaces for us all and generations to come."

DW's Mimi Mefo Takambou spoke with Tobore Ovuorie about the long-term consequences of her investigation, freedom of speech in her home country, and her future plans.

DW: The Nigerian government has banned the use of Twitter across the country. What is your perspective on that?

Tobore Ovuorie: I think the Twitter ban by the Nigerian government is ill-advised. I think the government is investing energy in the wrong direction because right now we have a horrendous state of insecurity in the country. On the highways, travelers are being kidnapped and being abducted. We have schoolkids being kidnapped and their parents being made to pay millions of naira as ransom. We have the Fulani herdsmen crisis. It's one chaos to another chaos. With all of this in mind, to come up with a Twitter ban, it's ill-advised. If the energy invested in the Twitter ban were invested in tackling the insecurity in the country or even the issue of power supply in the country, I think the governments would achieve a whole lot and Nigeria would be better for it. So the Twitter ban -- it's a no-no for me.

Many fear that the Twitter ban will have a negative impact on journalists. Especially those who have very compelling stories like you. What do you think the impact will be?

It's not just journalists who will feel the impact of this ban. I'm aware of young Nigerians who have spent a lot of time seeking employment but couldn't get a job. So they started small businesses. I have even been a customer of some of these young people. You know, I come on Twitter, I see whatever they are advertising. I like it and I simply go to their websites, we transact business, and they deliver to me. With a Twitter ban, these young people, their means of earning income has been shut down. No job, no way to transact business. So what's next for them?

As a journalist, I use Twitter to find out what are the trending stories to run surveys and all that. Since the ban, I actually feel like a thief sneaking into my own house. You know, I have to use a VPN and some of these VPN sites. One cannot really trust them.

You are known for your undercover investigations. Among other things, you exposed an international human trafficking ring by posing as a would-be sex worker. What was going through your mind during that investigation?

In particular, towards the last phase of the investigation, things really headed south. There was a time I was forced to strip -- and when I say strip, I wasn't wearing panties or a bra. I felt horrible. I felt objectified. And it has had a negative impact on me. When I eventually left the place, I simply just went back home. The rest of my day was messed up. I had a shower and I wept bitterly in the shower and simply just went to sleep. I couldn't do anything for the rest of the day. But it wasn't the only thing that happened. I was given substances to smoke. I'm managing asthma, so I really have no business smoking. And I ended up having an asthma crisis, was rushed to the hospital, had to undergo nebulization and was placed on oxygen. To be honest, I was simply praying that I would survive.

What was the motivating factor for you to do this kind of investigation?

What's kept me going was that I had lost somebody very close to me to trafficking. She was trafficked. I never had the opportunity to speak with her before she passed on. So it's created this silent anger in me. Then, besides the fact that I had been impacted personally, I don't take no for an answer. The very moment I say, OK, I'm going to do this, I would want to see it to a logical conclusion. If you are telling me no, whether you like it or not, you will grant me my request. I don't take no for an answer.

As a female investigative journalist in a country like Nigeria, how have you been able to balance your work and your personal safety?

First of all, let me stress, it is a job to be a Nigerian, to be in Nigeria. Then, being an investigative journalist is extra work. But a female investigative journalist? It's extra, extra work. Even before the investigation, I had learned to watch my back, but this particular investigation has made it worse. I recall there was a time I went house hunting and there was this very beautiful estate. I asked the property manager, are there any other exits besides the main one? And he said: No, this is the only exit in and out. And I said: I'm not interested. I can see the house is beautiful, but I can't live in a place where there's only one entry. It's like I'm living a life on the run.

Would you do an investigation like the one with the human trafficking ring again in the future?

Let me put it this way: Notwithstanding everything that's happened in 2013, you know, the rape, the outright abuse, having to struggle, still being in therapy. There are days I feel so down even until now. There are days I feel crappy, I feel horrible about myself. I would say if I had the opportunity to do this story or going undercover cover for trafficking again: Yes, I would do it. I will be more careful since I already have a huge experience. I will be more careful. And let me just let the cat out a little bit: Something is actually cooking in that direction.