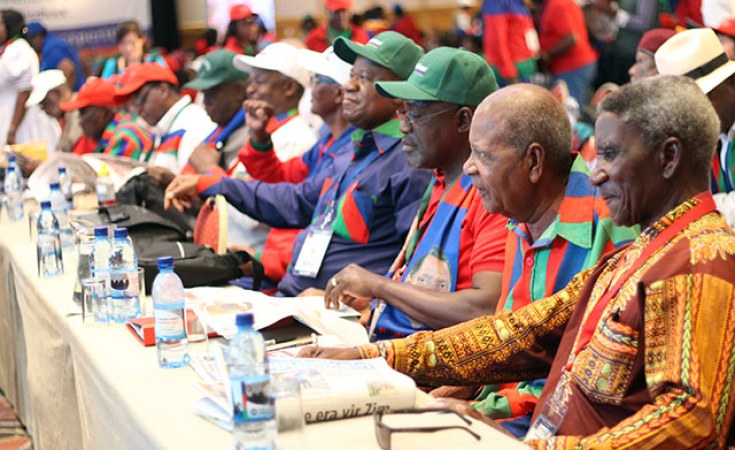 Swapo regional coordinators yesterday said former Cabinet minister Kazenambo Kazenambo's comments about President Hage Geingob, in which he labelled him an "idiot, a coward and an illiterate", were unacceptable.

While addressing the media on the genocide issue, Kazenambo ashed out at Geingob over the way the government handled the

genocide negotiations with Germany. A statement issued by the party's regional coordinators said such

insults are nothing but a flagrant attack on the integrity of the party, and the entire rank and file.

"Insults or abusive language towards our president are unacceptable, for they amount to insults against all of us as members, supporters and sympathisers of the Swapo Party," read the statement. In fact, the coordinators said such insults are a blatant attack against the Namibian people who elected the president of Swapo to be their head of state and commander-in-chief.

They said if they were to keep quiet in the face of such gross ill-discipline and verbal attacks against Geingob, they would be condoning such gross deviation from the values and principles of Swapo. "We wish to remind comrade Kazenambo that is not how we talk to each other in the Swapo party; our obligations as party members are very clear," the statement reads. "As a senior member of Swapo, who served in the Politburo and Central Committee, and the Swapo government as minister, comrade Kazenambo should desist and cease forthwith with insults against the party president and other leaders."

The coordinators further implored all party leaders and members to exercise their rights as guaranteed in the Swapo and Namibian constitutions to benefit the party and country without infringing on others' rights, or resort to present their cases through insults, or usage of abusive language to be heard. "The party and its government have put instruments in place for addressing issues of national importance," reads the statement.

The regional coordinators further cautioned its members not to misuse the instruments to personally gain or to score tribal points on matters of national importance. "We collectively have a common stance of not allowing demagogues and anarchists

to confuse our fellow countrymen and women, particularly Swapo members, supporters and sympathisers because they

are struggling to register their views respectfully in the democratic debate," the statement read.

"The party believes in discipline and order, and not in chaos. Therefore, we will not allow unruly members of the society and in our midst to cause chaos," further reads the statement. Kazenambo made the remarks at a press conference, where he announced that he had petitioned the United Nations Office on Genocide Prevention and the Responsibility to Protect to intervene in the genocide negotiations between Namibia

News of a deal for Germany to acknowledge that the 1904 to 1908 atrocities were indeed a genocide, that they would apologise and pay reparations have divided opinion in Namibia but have largely irked descendants of the victims of the genocide.

The pact includes an undertaking by Germany to pay N$18.6 billion (1.1 million euro) in development programmes over

30 years. Kazenambo, a descendant of the affected communities, said the deal may incite civil war and may lead to land grabs from Germans.