Zimbabwe: 'Prison Was Horrible but I Will Still Do My Work As a Journalist' - Jeffrey Moyo Upon Prison Release 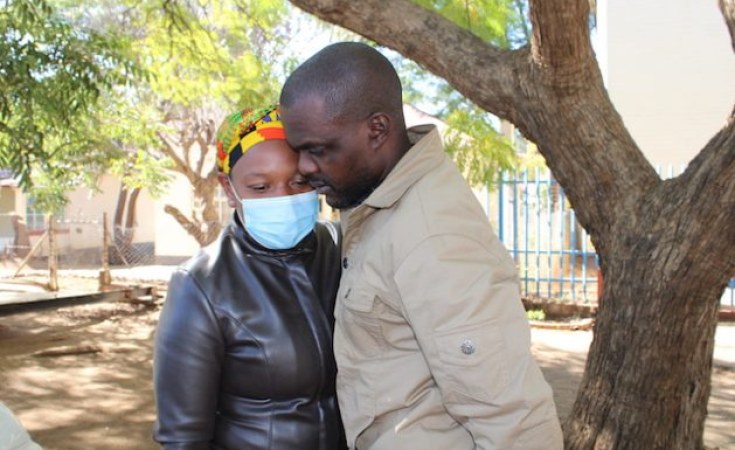 Busani Bafana / IPS
Jeffrey Moyo was reunited with his wife, Purity, and young son, after his release on June 16, 2021, from prison in Bulawayo, Zimbabwe.
Inter Press Service
By Busani Bafana

Bulawayo, Zimbabwe — International correspondent Jeffrey Moyo, who was a released from detention today after being arrested for breaching Zimbabwe's Immigration Act by helping two foreign journalists work in the country, says press freedom is undermined when journalists cannot work undeterred.

"I feel relieved as it was so horrible inside for 21 days without my freedom," Moyo told IPS upon his release from Bulawayo Prison today, Jun. 16. "The detention is a complete infringement of press freedom in Zimbabwe."

Moyo (37), a correspondent for Inter Press Service (IPS), the New York Times and other media, was arrested in Harare on May 26 and detained at Bulawayo Prison. He was released after 21 days when he was granted ZWL5000 bail unopposed by the state, which admitted to erring in finding him a threat to national security.

In May, Bulawayo Magistrate, Rachel Mkanga denied Moyo bail on the grounds that the journalist was a threat to national security and the county's sovereignty. Moyo has been charged with violating Section 36 of the Immigration Act, based on an allegation that he made a false representation to immigration officials. This pertains to the accreditation of two of his colleagues, Christina Goldbaum and Joao Silva from the New York Times.

"Journalists are not dangerous and do not cause any harm to any particular individual or government," said Moyo, who was welcomed by his wife, Purity, and son outside Bulawayo Prison. "I am scared about what happened but I will not stop my work. ... I am committed to doing my job as journalist no matter what the authorities say to me as long as I tow the line in terms of the law. I will continue to do my job."

Moyo was granted bail on Jun. 14 and was set to be released on Jun. 15 but an error with his release papers at the Bulawayo prison resulted in him spending another night in jail.

"I am just happy that he has been released, I am relieved," Purity Moyo, Jeffery's wife, told IPS. She was prevented from seeing her journalist husband in prison and had communicated with him via letters.

"I thank my wife who brought me something to eat every day," Moyo told IPS. "The letters my wife communicated to me gave me hope as did visits from colleagues from the media. I thank God that I am out and united with my family."

"I was detained overnight at the Bulawayo Central Police Station under horrible conditions; no bedding, no blankets and I was sleeping on the concrete floor and there was no food at the police station."

It was only to get worse.

Moyo said conditions at the Bulawayo Prison were inhumane. He said he was placed in a crowded prison cell with 18 other people. The food was bad.

"Health wise I am okay but the food in prison is horrible," he said explaining that he was served porridge with no sugar or salt, plain sadza (a type of maize or cassava porridge) and dried vegetables and beans without cooking oil.

Moyo's lawyer Doug Coltart told IPS that his client's detention was a series of appalling violations of his human rights. The state, after three weeks of opposing bail, made a turn around to say it had no case against Moyo and that the grounds it cited for opposing his bail were baseless.

This demonstrates precisely how the denial of bail at the magistrate's court is being used to punish innocent people, Coltart said. He also noted that in being denied the right to see his wife and relatives as well as his extended detention, despite being granted bail, were all violations of Moyo's rights.

"The prison officials continue to refuse to show us the purported error in the warrant of liberation and this raises our strong suspicion that it was all a lie and an abuse of the detention process to keep him for an extra night," Coltart told IPS.

Moyo is set to appear in court on Jun. 24 in preparation for trial. If convicted he could face 10 years in jail. Media rights organisations have welcomed Moyo's release.