Africa: Soaring E-Waste Affects the Health of Millions of Children, WHO Warns 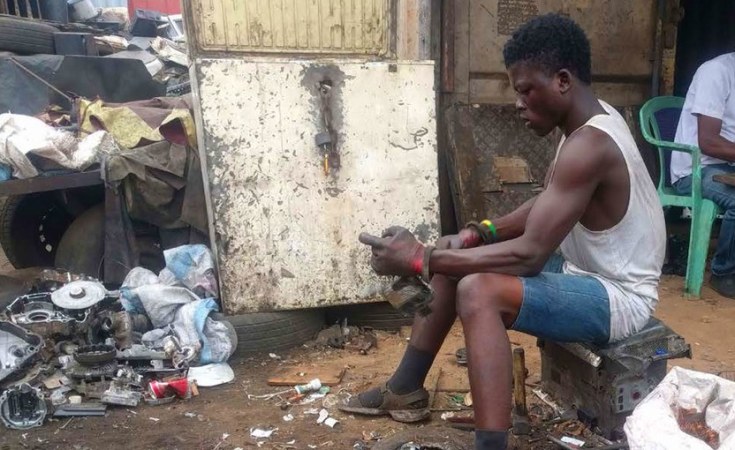 Effective and binding action is urgently required to protect the millions of children, adolescents and expectant mothers worldwide whose health is jeopardized by the informal processing of discarded electrical or electronic devices according to a new ground-breaking report from the World Health Organization: Children and Digital Dumpsites.

"With mounting volumes of production and disposal, the world faces what one recent international forum described as a mounting "tsunami of e-waste", putting lives and health at risk." said Dr Tedros Adhanom Ghebreyesus, WHO Director-General. "In the same way the world has rallied to protect the seas and their ecosystems from plastic and microplastic pollution, we need to rally to protect our most valuable resource -the health of our children - from the growing threat of e-waste."

As many as 12.9 million women are working in the informal waste sector, which potentially exposes them to toxic e-waste and puts them and their unborn children at risk.

Meanwhile more than 18 million children and adolescents, some as young as 5 years of age, are actively engaged in the informal industrial sector, of which waste processing is a sub-sector. Children are often engaged by parents or caregivers in e-waste recycling because their small hands are more dexterous than those of adults. Other children live, go to school and play near e-waste recycling centres where high levels of toxic chemicals, mostly lead and mercury, can damage their intellectual abilities

Children exposed to e-waste are particularly vulnerable to the toxic chemicals they contain due to their smaller size, less developed organs and rapid rate of growth and development. They absorb more pollutants relative to their size and are less able to metabolize or eradicate toxic substances from their bodies.

Impact of e-waste on human health

Workers, aiming to recover valuable materials such as copper and gold, are at risk of exposure to over 1,000 harmful substances, including lead, mercury, nickel, brominated flame retardants and polycyclic aromatic hydrocarbons (PAHs).

For an expectant mother, exposure to toxic e-waste can affect the health and development of her unborn child for the rest of its life. Potential adverse health effects include negative birth outcomes, such as stillbirth and premature births, as well as low birth weight and length. Exposure to lead from e-waste recycling activities has been associated with significantly reduced neonatal behavioural neurological assessment scores, increased rates of attention deficit/hyperactivity disorder (ADHD), behavioural problems, changes in child temperament, sensory integration difficulties, and reduced cognitive and language scores.

Other adverse child health impacts linked to e-waste include changes in lung function, respiratory and respiratory effects, DNA damage, impaired thyroid function and increased risk of some chronic diseases later in life, such as cancer and cardiovascular disease.

"A child who eats just one chicken egg from Agbogbloshie, a waste site in Ghana, will absorb 220 times the European Food Safety Authority daily limit for intake of chlorinated dioxins," said Marie-Noel Brune Drisse, the lead WHO author on the report. "Improper e-waste management is the cause. This is a rising issue that many countries do not recognize yet as a health problem. If they do not act now, its impacts will have a devastating health effect on children and lay a heavy burden on the health sector in the years to come."

E-waste volumes are surging globally. According to the Global E-waste Statistics Partnership (GESP), they grew by 21% in the five years up to 2019, when 53.6 million metric tonnes of e-waste were generated. For perspective, last year's e-waste weighed as much as 350 cruise ships placed end to end to form a line 125km long. This growth is projected to continue as the use of computers, mobile phones and other electronics continues to expand, alongside their rapid obsolescence.

Only 17.4% of e-waste produced in 2019 reached formal management or recycling facilities, according to the most recent GESP estimates, the rest was illegally dumped, overwhelmingly in low- or middle-income countries, where it is recycled by informal workers.

Appropriate collection and recycling of e-waste is key to protect the environment and reduce climate emissions. In 2019, the GESP found that the 17.4% of e-waste that was collected and appropriately recycled prevented as much as 15 million tonnes of carbon dioxide equivalents from being released into the environment.

Children and Digital Dumpsites calls for effective and binding action by exporters, importers and governments to ensure environmentally sound disposal of e-waste and the health and safety of workers, their families and communities; to monitor e-waste exposure and health outcomes; to facilitate better reuse of materials; and to encourage the manufacture of more durable electronic and electrical equipment.

It also calls on the health community to take action to reduce the adverse health effects from e-waste, by building health sector capacity to diagnose, monitor and prevent toxic exposure among children and women, raising awareness of the potential co-benefits of more responsible recycling, working with affected communities and advocating for better data and health research on the health risks faced by informal e-waste workers.

"Children and adolescents have the right to grow and learn in a healthy environment, and exposure to electrical and electronic waste and its many toxic components unquestionably impacts that right," said Dr Maria Neira, Director, Department of Environment, Climate Change and Health, at the WHO. "The health sector can play a role by providing leadership and advocacy, conducting research, influencing policy-makers, engaging communities, and reaching out to other sectors to demand that health concerns be made central to e-waste policies."

A significant proportion of e-waste produced every year is exported from high-income countries to low- and middle-income countries, where there may be a lack of regulation, or where regulation does exist, it may be poorly enforced. Here, e-waste is dismantled, recycled and refurbished in environments where infrastructure, training and environmental and health safeguards may be non-existent or poorly adhered to. This places e-waste workers, their families and communities in greater danger of adverse health effects from e-waste recycling.

The WHO Initiative on E-waste and Child Health, launched in 2013, aims to increase access to evidence, knowledge and awareness of the health impacts of e-waste; improve health sector capacity to manage and prevent risks, track progress and promote e-waste policies that better protect child health; and improve monitoring of exposure to e-waste and the facilitation of interventions that protect public health.

The report was produced with the input and support of the E-Waste Coalition, a group of 10 UN agencies and international organizations, including the WHO, who have come together to increase collaboration, build partnerships and more efficiently provide support to Member States to address the e-waste challenge.

Tagged:
Copyright © 2021 World Health Organization. All rights reserved. Distributed by AllAfrica Global Media (allAfrica.com). To contact the copyright holder directly for corrections — or for permission to republish or make other authorized use of this material, click here.