Abuja, Nigeria — Nigeria's female activists were on the front lines in last year's mass protests against police brutality but say they do not always get the same recognition as their male counterparts.

From her homemade office, Nigerian activist Aisha Yesufu sets up her mobile device and records the day's episode of her take on issues bedeviling the country.

She reaches thousands of online listeners every week to address issues of inequality, injustice, bad governance and sometimes, improved conditions in Nigeria.

Yesufu, 47, started participating in protests as a school student nearly three decades ago -- but she says it has not been easy.

"I'm not that typical person you'll see coming out to make demands -- 'Here I am. I'm a Muslim. I'm a woman. I wear hijab.'" she said. "And then it's like, typically, you're not supposed to speak as a Muslim. That's how a lot of people look at it."

In 2014, Yesufu gained prominence for co-founding the Bring Back Our Girls Movement, a group that raised global awareness demanding the release of 276 girls kidnapped by Boko Haram in northern Nigeria.

Last October, she took part in the End SARS protests, which targeted police brutality in the Special Anti-Robbery Squad (SARS).

A viral picture of her kneeling with her clenched fist into the air, while heavily armed police officials charged toward protesters, became the movement's symbol. But she says she feared for her life.

"The police were shooting at me. I literally thought I was going to die," she said. "The only thing I said to God was, 'God, please let it be a clean thing. Let whoever's bullet is going to touch me, let it be straight to the heart. Let me fall dead, because I wouldn't want to be on the floor in pain while some policemen and women will be standing over me and gloating.'"

Yesufu's resilience over the years has inspired many other women in Nigeria.

During the End SARS protests, many women organized and led street demonstrations.

Among them, 22-year-old Rinu Oduala, who led protests in Lagos.

"I am constantly reminded that as a female growing up in Nigeria, I only need to be seen and not heard," Oduala said. "So, I fight each day to use my voice and platform to talk about issues affecting my society."

Nigerian culture, like many others in Africa, is highly patriarchal. But Vivian Bellonwu, founder of Social Action Nigeria, says things are changing gradually due to increasing levels of women's education.

"It better exposes us to the rights and wrongs that have been going on," Bellonwu said. "Not just that it exposes us, it also gives a kind of confidence that impossibilities do not exist and that conventions can always be challenged."

Last month, Nigeria's women's affairs minister moved for a constitutional review that would give women up to 35% representation in public offices. The current figure is just 7%.

Bellonwu said it will take a major change before women are perceived as equals in Nigeria, something she said will not happen soon. 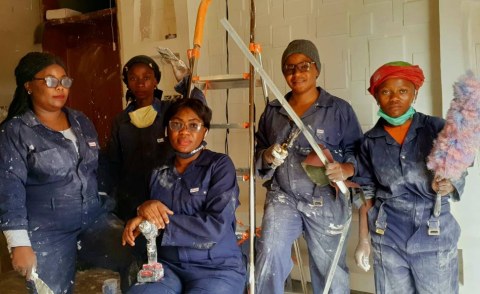 Allies In Workplaces - Why Fighting Sexism Enriches Men Too
Tagged:
Copyright © 2021 Voice of America. All rights reserved. Distributed by AllAfrica Global Media (allAfrica.com). To contact the copyright holder directly for corrections — or for permission to republish or make other authorized use of this material, click here.