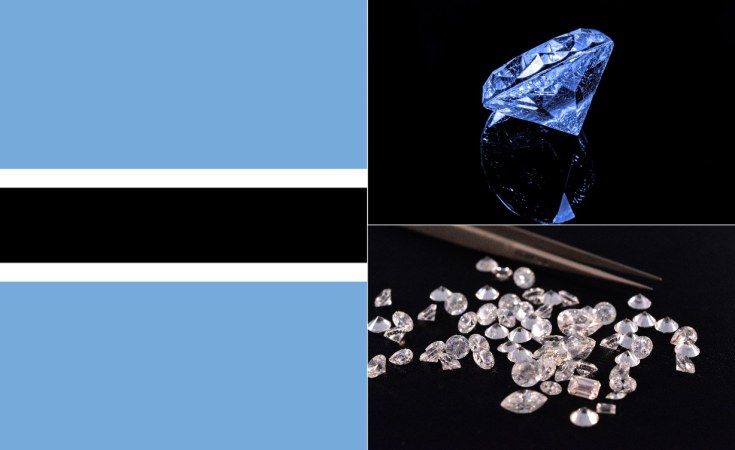 Gaborone — The discovery of Debswana Mining Company's largest diamond in history is a symbol of what Botswana is about, President Dr Mokgweetsi Masisi has said.

Speaking at State House yesterday during the official presentation of the 1 098-carat diamond found at Jwaneng Mine, President Masisi said the gemstone signified the Botswana story.

"This is a unique Botswana story, the processes that we engage in, the company that enabled this- a joint collaboration between government and the private sector; the workforce from the lowest level to the highest in the chain of command, the display of humility, honesty and integrity consistent with the values of Botswana," Dr Masisi said.

The President said consistent with the 'diamonds for development' narrative that had transformed Botswana's fortunes since independence, the financial benefit Debswana would derive from the new discovery would be utilised to further enhance the country's progress.

"Our national development needs will in part be met by the proceeds of the diamond; we will tax the company sufficiently, they will pay royalties and remunerate their workers, and we will distribute the resources through the systems we have to develop this country," Dr Masisi said.

He further said as the country moved towards participating in the fourth industrial revolution, the find could serve as a reflection point on the type of technologies best suited for extraction of more such gemstones.

Minister of Mineral Resources, Green Technology and Energy Security, Mr Lefoko Moagi said it was rare for a gemstone of that magnitude to be discovered through a conventional ore-processing circuit.

"Normally it would not have come out as it did, it would normally have been broken up, and this is indeed a momentous occasion for Debswana, especially since the largest stone they ever discovered was in 1993, also at Jwaneng, and it was 446 carats and this is the first they unearthed more than 1000 carats," Mr Moagi said.

He said such discoveries were important in boosting Botswana's mining sector and as a result, the economy and national development agenda.

Sharing the tale of the historic day, Jwaneng Mine general metallurgical assistants Mr Obakeng Kefentse and Mr Phodiso Selaledi, who made the discovery, said they initially thought it was part of valueless rocks to be discarded.

For her part, acting Debswana managing director, Ms Lynette Armstrong said it was one of the largest gem-quality rough diamonds ever discovered but the exact world ranking was still to be ascertained.

It was however the second largest ever unearthed in the country after the 1 111-carat Lesedi La Rona found at Karowe Mine in 2015 but both rank below the biggest gem ever discovered, South Africa's 3 106-carat Cullinan Diamond mined in 1905.

She said the new diamond, mined at Jwaneng Mine's south kimberlite pipe, had not yet been valued or named, but was of huge significance.

Among the dignitaries present at the gemstone unveiling were the First Lady Neo Masisi, Vice President Slumber Tsogwane, all cabinet ministers and their deputies as well as acting Permanent Secretary to the President and Debswana board chairperson, Ms Emmah Peloetletse and Jwaneng Mine general manager, Mr Koolatotse Koolatotse.

'Third Largest Diamond' Ever Seen Found in Botswana Mine