Uganda: Covid-19 - How the Refugees in Uganda Are Faring 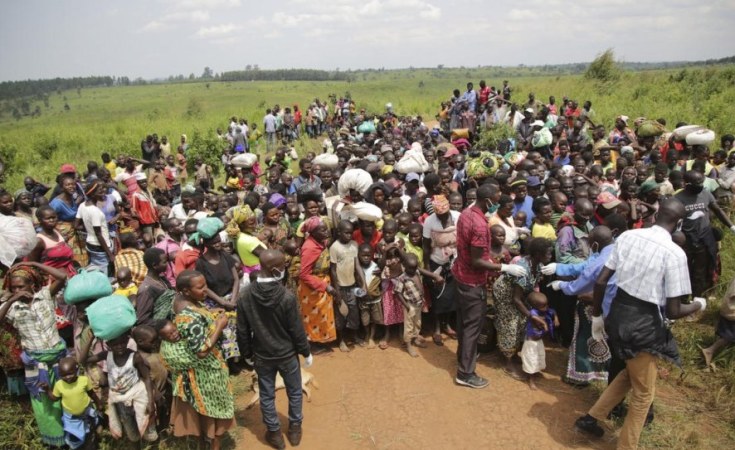 The general food assistance continues to enable refugees to meet their immediate food and nutrition needs and sustain a minimum level of food security.

During the latest period there has been no new arrivals reported as borders remained closed by the government due to Covid-19 but World Food Programme (WFP) continued to provide hot meals to the asylum seekers pending registration and relocation and those awaiting Refugee Eligibility Committee.

In December 2020, the WFP announced further reduction in food rations for1,482,101million refugees in Uganda due to funding shortfall as a result of covid-19 effects on funders who were equally affected. The refugees henceforth are to get 60% of food ratio or cash for those receiving money.

According to the Uganda Refugee Response Plan (RRP) 2020-2021 Publication, the refugee response resource constraints remained a challenge therefore all settlements continued to receive a 60% ration for both in-kind and physically across all settlements.

Strict controls at the border together with procurement delays, created new resourcing and supply chain challenges causing pipeline shortfalls in pulses for the months of November and December and this let to WFP to adjust the food baskets substituting pulses for cereals in two settlements during those months.

Due to the COVID-19 pandemic and diminishing contacts, WFP provided two month rations for all settlements except Nakivale, Oruchinga where refugees receive monthly cash transfers through the Agent Banking system.

Kiryandongo and Palabek were provided food rations in the off months and WFP continued its food assistance using cash based transfers to vulnerable urban refugees via mobile money and cash over the counter through Post Bank to mitigate the impact of COVID-19 pandemic to urban refugees.

The exercise was implemented jointly with UNHCR, who was responsible for the cash assistance covering.

Operational challenges forced WFP to shift its cash delivery mechanism from Mobile Money to immediate cash over the counter.

In November 2020, the proportion of households with insufficient food consumption was 47% among settlement based refugees, 32% and 13% among Kampala based refugees and nationals in host communities, respectively.

However, Bidi-Bidi recorded a deterioration with 59% of settlement based refugee households using medium or high food based coping strategies.

This was 7% and 39% higher when compared to October 2020 and November 2019, respectively. Female headed households were more likely to use negative food based coping strategies reflecting 65% for female against 56% for males

BidiBidi 79%, Imvepi 76% and Adjumani 69% had the highest proportion of households that resorted to the use of negative food based coping strategies.

"I have worked in Invempi Refugee settlement for about 5 years and now I am in Rhino Camp which is not far from the former. The activities in these camps including Bidibidi are similar. In most cases the refugees and host communities are engaged in communal farming of various crops where they sell their produce in the available markets. However the lockdown early 2020 affected activities of the refugees. At the beginning a number of them were seated home and yet food ratio had been reduced, this led to starvation in some households but later on people were encouraged to go back to their gardens and resume with farming and the situation has changed," he explained.

Mbaguta contends that refugees in West Nile have been mobilized in to form Associations comprising of 30 members. This is to enable them carry out farming activities as a group.

For the case of commercial farming, most of them are growing cassava varieties bred by Naro, mainly Narocas1 and Simsim which they harvest, bulk and sell as group. They usually have time frame after every harvest where they divide the proceeds.

For food security, they grow quick maturing vegetables such as cabbages, cow pea, beans, pigeon pea and groundnuts and maize among others to supplement on the food.

Some families grow some of the vegetable varieties in sack gardens using various technologies with others filling soil in sacks while others use raised tires.

In all settlements the food ratio given to the refugees is uniform with everyone per head given 13kg of maize flour and 6 kg of beans including salt and other cooking ingredients. For those who wish to get money, they are given Shs19, 000 per person.

There are scenario of children who came to the settlement minus their parents and these are usually attached to foster parents who are their close relatives.

A visit to Kiryadongo refugee settlement camp indicates that most refugees are involved in activities of all sorts with the host communities ranging from farming, small scale business such as restaurants, selling roasted maize by the roadside and vending ripe bananas as well as boda boda riding business for the men.

Most of the refugees comprising of Kenyan, Congolese and South Sudanese nationals are faced with hardship ranging from food security, to affordability of daily needs such as school fees and clothing for their children.

Mr Jackson Kidega the team leader in charge of agriculture Food and Agriculture Organisation (FAO) is responsible as one of the partners in sensitizing refugees at the settlement with adaptation of sustainable small scale agriculture for food security.

It is his contention that in most cases new arrivals are faced with the challenge of food shortage because they depend entirely on food ratio provided by WFP because they would not have been allocated a plot of land by the management of Office of the Prime Minister (OPM) responsible for land allocation.

However, once a refugee and their family are allocated land which is usually one acre or half- depending on the size of the family- development partners such as FAO come in to support them with farm inputs and encourages them to embark on small scale farming.

Ms Jackline Alarokor, 32, is one of the refugees who upon arrival at Kiryadongo refugee settlement as a young girl aged 15 was faced with the challenge of food security.

"I came to this settlement in 2004 from Balwa Boma village in Torit as a child and I joined my relatives who were already at the camp. There used to be acute food insecurity challenge. I tried going back to school but due to lack of school fees I dropped out from Primary seven. I decided to get married to Anthony Ocaya. We now have eight children and things have now changed for better," she said

According to her, the family has been allocated one acre of land where she is able to grow green vegetables ranging from cabbages, Nakati, eggplant, jute mallow and a local variety called Oyada among others.

The vegetables she says once harvested, a potion is taken to the local market as income earning initiative and some portion is for changing diet.

"I have 8 children and I registered them in my book and my husband has two other people he is looking after and he registered them in his book. Whatever we receive in a month we plan for it jointly especially when it comes to payment of school fees for the children," she notes.

Alarokor is a hardworking lady who managed to mobilize 27 members and formed a farm association called Oribacum farmer group. They have a village saving initiative where each member saves between Shs10, 000 and Shs20, 000 per week. The profit is distributed to members at the end of the year while members are free to apply for soft loan which the pay back with minimum interest.

The group so far has rented one acre land where they have planted maize which they intend to harvest and sell as a bulk including what they are growing in their small pieces of land.

Alarokor says she has no interest of returning to her country of origin because Uganda is a peaceful country and the citizens are welcoming.

The second beneficiary is James Tabani 38 years whose parents came to the settlement from Obo Village in Torit in 1990 when he was a young child.

His parents died and his three brothers have since gone back but he decided to remain. He is newly registered as refugee but he is not happy that the land which was allocated to his parents has been taken away and he is given a quarter an acre where he is unable to carry out any agricultural activity.

He has four children and he prefers to receive food ratio instead of money. This he says will help the burden of purchasing food every other time.

Apparently he hiring two acres of land from the host community for growing maize and cassava for commercialization.

In a season he able to harvest 8 bags of maize grain which he sells at Shs700 per kg and usually the harvest from cassava various season by season.

His dream is go back to his homeland and join the rest of the family members because they have verse village farm which he hopes he can utilize to make a better living.

Mary Yangi is refugee settled in Invempi refugee settlement in West Nile. She is from Torit in South Sudan and her parents came in 1990 and she joined them in 2004.

The parents have since died and she inherited her parent's 1 acre land where she is living with her six children. She is a widow whose husband was killed during the insurgency back in her country. She has settled in farming growing Maize, simsim and rearing goats.

To her, food security is covered because she is consuming stuff from her farm, some of which she sells to earn income.

According to official website of the United Nations High Commissioner for Refugees (UNHCR) in the 2021 report it is stated that activities of refugee settlements in Uganda are coordinated by the office of the prime minister with UNHR taking lead.

OPM and partners are overseeing refugee settlements in various locations of Yumbe, Adjumani, Obongi, Madi Okollo, Terego, Koboko, Isingiro, Kukuube, Kyegegwa and Kampala with the numbers varying from one location to another

These refugees are of various nationalities and countries include South Sudan, Sudan, Democratic Republic of Congo, Somalia, Eritrea, Ethiopia, Rwanda and Burundi among others.