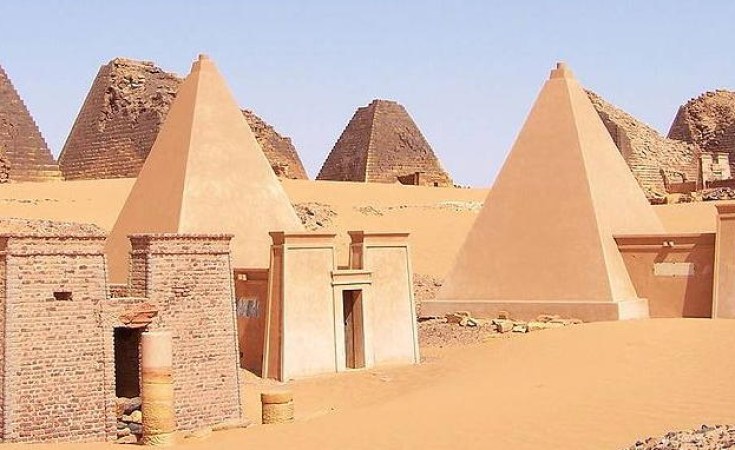 The word "pyramid" is synonymous with Egypt, but it is actually neighbouring Sudan that is home to the world's largest collection of these spectacular ancient structures.

Beginning around 2500BC, Sudan's ancient Nubian civilisation left behind more than 200 pyramids that rise out of the desert across three archaeological sites: El Kurru, Jebel Barkal and Meroe, in addition to temples, tombs and royal burial chambers.

Despite being smaller than the famous Egyptian pyramids of Giza, Nubian pyramids are just as magnificent and culturally valuable. They even offer a crowd-free experience for intrepid tourists.

Built of sandstone and granite, the steeply-sloping pyramids contain chapels and burial chambers decorated with illustrations and inscriptions carved in hieroglyphs and Meroitic script celebrating the rulers' lives in Meroe - a wealthy Nile city and the seat of power of Kush, an ancient kingdom and rival to Egypt.

Located about 220km north of the capital Khartoum, the cultural gem of Meroe is now one of Sudan's most significant Unesco world heritage sites. However a lack of preservation, severe weather conditions and negligent visitors have all taken their toll on its monuments. Back in the 1880s, for instance, the Italian explorer Giuseppe Ferlini blew up several pyramids in his search for Kushite treasure, leaving many of the tombs missing their pointy tops. Many more of Sudan's other pyramids were subsequently plundered and destroyed by looters.

These days sandstorms and shifting sand dunes pose the biggest threat to Sudan's ancient heritage sites. This phenomenon is nothing new, and was even chronicled thousands of years ago. An inscription found in a temple from the 5th century BC describes a Kushite king giving an order to clear out sand from the pathway:

His Majesty brought a multitude of hands, to wit, men and women as well as royal children and chiefs to carry away the sand; and his Majesty was carrying away sand with his hand(s) himself, at the forefront of the multitude for many days.

But today the threat has been exacerbated by climate change, which has made the land more arid and sandstorms more frequent. Moving sands can engulf entire houses in rural Sudan, and cover fields, irrigation canals and riverbanks.

While some archaeologists believe sand movement helps to preserve ancient artefacts from thieves, it is known to be detrimental to excavated sites, reburying them beneath the desert. Sand blown by the wind also erodes delicate stonework and sculptures.

Fighting back against desertification

The best way to combat sand movement and desertification is to increase the vegetation cover, and one ambitious African-led reforestation project is leading the way.

Bringing together more than 20 nations, the Great Green Wall is a multi-billion dollar movement to stop the spread of the Sahara Desert by restoring 100 million hectares of land across the continent from Senegal in west Africa to Djibouti in the east. The intention is to cultivate the largest living barrier of trees and plants on the planet, with Sudan having the longest stretch of the "wall".

Only 4% of the target area has been covered so far, with big variations from country to country. When it is more complete, this experimental project will hopefully limit the frequency of dust storms and slow the movement of sand onto fertile lands and Unesco sites in northern Sudan. It will also contribute to tackling the extreme heatwaves in semi-arid areas such as the capital Khartoum, where the temperature goes well above 40°C during summer.

However, monitoring the impact of the project, which spans 5,000 miles across Africa, requires "big picture" data. This comes from the latest satellites and remote sensing technologies.

Satellite imagery can provide valuable information about sand movement. For instance satellites are used to monitor the dust storms that transport sand from the Sahara across the Atlantic Ocean to supply the Amazon rainforest with essential fertilising nutrients.

But what about on a smaller scale? How do you predict if and when sand will submerge a field, a watering hole - or a pyramid?

In my own research I have previously used multiple overlapping images taken from aeroplanes to generate digital elevation models for sand dunes in northern Sudan. That led to my current PhD research which focuses on monitoring the movement of sand dunes using satellite optical and radar images, airborne laser imagery and other techniques. My research also investigates the influence of factors such as wind speed and direction, presence of vegetation and topography.

Colleagues and I ultimately want to develop our understanding of how sand dunes grow in size and how they migrate across the desert. This will enable us to monitor the effectiveness of interventions such as vegetation barriers, helping to combat desertification and climate change and to ensure people in Sudan are able to grow enough food. And we may even be able to predict when and where those pyramids will be buried - and what we can do to prevent it.