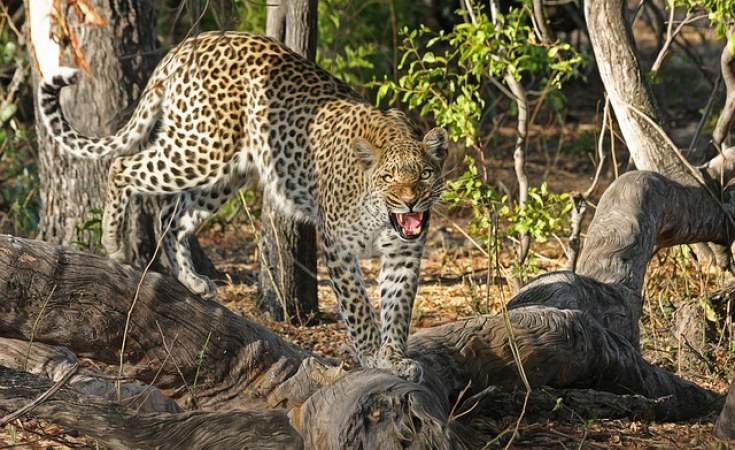 The maze-like nests of the tiny and noisy sociable weaver bird commonly found in arid parts of southern Africa aren't just a marvel to look at.They provide shelter, food and scent-marking places for animals as diverse as cheetahs, falcons and owls in biodiversity hubs that may become increasingly important as human-induced climate change worsens, scientists in South Africa have found.

The fabulously imposing tree-top communal nests or colonies of the sociable weaver are so important to localised ecosystems that the small brown birds are now seen as 'ecosystem engineers' - a term more commonly associated with charismatic mammals like elephants that change habitat by tearing down trees to open up woodland for grazing.

A new study carried out over 12 months in Tswalu Kalahari, a nature reserve in northern South Africa on the edge of the Kalahari Desert, surveyed 45 trees with weaver colonies in them against 45 without. Two pairs of trees (colony and non-colony) were surveyed at a time with camera traps.

The researchers found that leopards and cheetahs used the nests as platforms on which to rest or feed on their kills.

Kudus sheltered in the shade beneath them and wildebeest chomped on collapsed sections of nests when grazing was scarce.

"We found cheetahs using colonies as often as they did very surprising, but the most surprising was the number of arboreal (tree-dwelling) species that used the colonies and how often they used them," Anthony Lowney, co-author of the study, told RFI.

The researchers found that visits to colony trees by tree-climbing mammals like small-spotted genets (a catlike carnivore) for the purpose of feeding, resting or scent-marking were 39 times greater than trees without nests.

"Initially, we did not plan to put camera traps up in trees, but noticed some fresh mammal faeces on a colony one day so decided to put some camera traps up and we were surprised by what we found," Lowney said.

The nests selected for the study each had at least 20 chambers in them. Weaver colonies can last for more than a hundred years and accommodate hundreds of individual sociable weavers.

Surveys were also undertaken to discover what birds other than weavers associated with colony trees.

The researchers found spotted eagle-owls nesting on top of some colonies and barn owls nesting or roosting within some of the chambers.

So did pygmy falcons - one of the world's smallest falcon species - that don't build their own nests but rely solely on sociable weaver colonies.

"Birds that roost within the colony chambers receive thermal benefits during the high summer and cold winter temperatures," the study, published in the Journal of Animal Ecology, noted.

"We found that individuals (both birds and mammals) visited trees more often when they contained a weaver colony," it added. "Sociable weavers clearly satisfy the requirements to be an obligate ecosystem engineer."

It noted that weaver colonies "may be increasingly important as human-driven climate change advances" by helping to shield other animal communities from environmental stress. As the study shows, the resources provided by the nest colony trees can alleviate the stresses caused to other animals by excessive temperatures and unreliable rainfall.

While sociable weavers might play a role in sheltering some species from the effects of future climate change, the weavers could themselves be at risk.

Scientists say that birds that live in deserts or semi-deserts are especially vulnerable to global warming. The rise in average temperatures there over the next few decades may force some species to extend their range to cooler regions or risk becoming extinct.

"If temperatures become too hot then (sociable weavers) might not be able to maintain colonies as they may choose to sit in the shade instead," Lowney said. "Also, if climate change affects the amount of vegetation then the weavers may not have enough material (to build nests with) meaning that nest chambers may not provide sufficient insulation, which could have negative effects on eggs or chicks that are in these nests."