Nigeria: Explainer - What to Know About Twitter's Rival App, Koo 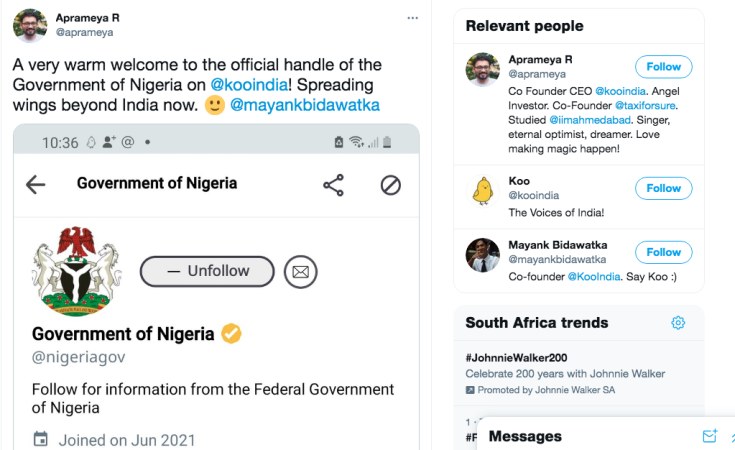 Barely a week after Nigeria's Government placed an indefinite suspension on the operations of microblogging site, Twitter, the federal government made its debut on an Indian-based social media platform, Koo, which was barely known in Nigeria.

With the announcement of the government's arrival on the made-in-Indian app by its co-founder and CEO Aprameya Radhakrishna, the yellow bird app is gaining traction among some Nigerians as they seek another source of keeping abreast with information hitherto filled by Twitter.

What is Koo App?

Koo is a micro-blogging platform which was developed by Aprameya Radhakrishna and Mayank Bidawatka in March 2020 but was floated in May of the same year. It won the Aatmanirbhar App Challenge organized by the Indian government in August 2020. It has a similar interface with Twitter and its rise is hinged on the stormy path Twitter took with government authorities in India and most recently in Nigeria.

Like Twitter, Koo can be used to profess views and opinions on various topics. It allows users to follow other users, conduct polls, share photos, audio and video with a Direct Message (DM) to facilitate chat with each other. It also allows users to place their posts with hashtags and the @ sign also comes before a username, to mention or reply to other users. Koo uses a yellow and white interface and like the blue-bird app, a verified account is given a yellow tick to indicate its authenticity.

A check on Google Play Store shows it has been downloaded over 5 million times. Apart from English, the application features some local languages spoken in India such as, Bengali, Hindi, Kannada, Marathi, Tamil and Telugu. However, the co-founder and CEO, Aprameya wrote on the microblogging app that: "Koo is available in Nieria. We're thinking of enabling the local languages there too. What say?"

How it rose to prominence

In an interview with Financial Express online, the co-founders of the microblogging app said they initiated the app to give a voice to everybody in India and chose the yellow bird to symbolise a happy bird spreading good messages among the community in India.

The rise of Koo is however credited to not only its winning of the Indian government's Atma Nirbhar App Innovation Challenge but a row between Twitter and the Government of India in which a show of supremacy led to government officials dumping Twitter for the new app. Since then, Koo has seen a surge in usage. Its fortunes also increased following another standoff between Twitter and the Nigerian government with the later suspending access to the microblog in the country on June 5, 2021. Koo's similarity with Twitter has made netizens in Nigeria crave for a platform to garner information on-the-go switch alliance. "The Nigerian government's decision to join Koo after banning Twitter reinforces its position as an alternative platform to Twitter," says Pranav Mukul, an Indian journalist with the Indian Express. With its newfound fame, Koo announced a $30 million fundraise from marquee investors including Tiger Global at a time Indian authorities were turning the heat on Twitter. The fund-raise saw Koo's valuation jump nearly five-fold to $100 million.

Who is on the Koo app?

Since the Nigerian government joined the app with a verified handle @nigeriagov, other Nigerians including President Muhammadu Buhari with a verified handle (@muhammadubuhari) and his Personal Assistant on Digital and New Media, Bashir Ahmad have joined. A Koo handle claiming to be that of the First Lady Aisha Buhari (@A_Buhrari) has equally surfaced. Activist and former Senator representing Kaduna Central, Shehu Sani (@Sen.shehuSani) has been active on the platform as well as Kanywood celebrities such as Hadiza Gabon (@Hadiza_Aliyu) and Rahama Sadau (@Rahama).

The Nigerian Government had alleged that fake news and hate speech were being churned out on Twitter, with the platform not taking any action. In response to the platform deleting President Muhammadu Buhari's tweet, the Nigerian Minister of Information and Culture, Lai Mohammed had accused Twitter of double standards and allowing itself to be used to undermine the country's corporate existence. With the recent migration of the Nigerian government to Koo, it is uncertain if the government can still checkmate fake news and hate speech in the new platform. However, when asked about fake news the co-founders said: "This is one of those topics that falls in the grey area. A lot of policies are yet to be put in place as far as social media is concerned. Because unlike publishers, this is not curated content. If this was a simple question, we won't be discussing it. We would have answers for it. The global platform would have had answers for it. We are dealing with social media, which means we are dealing with a space where people have the freedom to express themselves and there will be unscrupulous elements which will plug in some sort of fake news on a platform waiting for it to explode."

They were optimistic that it can be tackled by service providers going to the source of the news and trying to figure out where it came from. Commenting on hate that has become the bane of the World Wide Web, they said that since the company is registered and bound by law, it will ensure a healthy conversation, and that is what the app stands for.