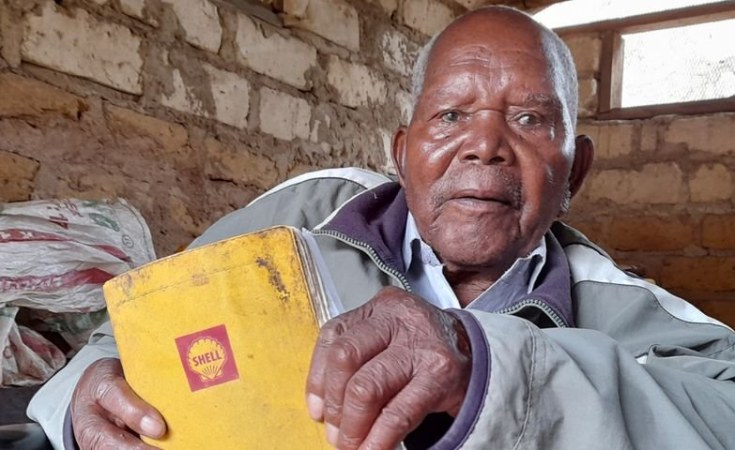 Lucy Mkanyika/Nation Media Group
Veteran freedom fighter Herman Mwandighi displays his diary during an interview at his home in Lushangonyi on January 2, 2021.
The Nation (Nairobi)
By Lucy Mkanyika

Veteran freedom fighter Herman Mwandighi has died at Wesu Sub-County hospital in Taita Taveta County at the age of 101.

Mr Mwandighi, who also participated in the World War Two, died while receiving treatment at the hospital on Thursday.

The veteran freedom fighter had been ailing for some time after his right leg was amputated in 2016. He has been undergoing treatment both at the hospital and at his home in Lushangonyi village.

Mr Vernant Mwazumbi said his father breathed his last in the morning when he had visited the hospital for his routine clinic.

"We were just about to see the doctor when his condition worsened and he passed on," he said.

Born in 1920 at Kilongwa village in Wundanyi, he was inspired by his father to go to school and get a good job in the colonial government.

At the age of 21 years, Mwandighi was deployed to Abyssinia after Kenya was dragged into British military campaigns in 1941 to 1945 during the Second World War.

In a previous interview with nation.africa Mzee Mwandighi said that during his service, he used to make beds, storage boxes for military weapons, and other wooden related products purposely for the soldiers.

"I would at times find myself in the firing line as we were assigned to drive the soldiers to the war zones," he said.

His military pass shows that he was registered officer number 14970, who served up to the rank of a sergeant, after being recruited as a serviceman on January 6, 1941 and discharged on November 29, 1945.

During the Mau Mau insurgency, Mr Mwandighi was appointed by Taita elders to be among Jommo Kenyatta's security guards. He guarded him whenever he came to hide in Mwanguwi caves in Taita, which were later renamed Kenyatta caves in honor of the First President.

He was issued with a bow and poisoned arrows, which are still at his home as evidence of taking part in the struggle for freedom.

Together with other freedom fighters in the area, they formed the Taita Hills Association (THA), which comprised of fighters from the larger Taita Taveta region.

He was then appointed as the first Kanu chairperson in Taita Taveta, a position that saw him tasked with lowering the colonial flag and raising the Kenyan flag in 1963 at Wundanyi, when the country gained independence.

Mr Mwandighi was later appointed as the first councilor for Mwanda, under the African District Council (ADC), and was always on the forefront in defending the interest of Taita Taveta, especially on land matters.

His son said his father has died before his wish for recognition was granted by the government.

"That was my father's last wish. He always asked me whether anyone had contacted me about his request," he said.

During an interview with the freedom fighter at his home in January this year, he had requested the government to recognise his role in the struggle for independence.

Due to his knowledge on politics, aspiring leaders from the county used to visit him to give his blessings during election periods.

Mr Mwandighi will be buried at his home in Lushangonyi on June 26. Leaders from the region are expected to attend his funeral.