Uganda: How Uganda Stands to Benefit From DRC Roads 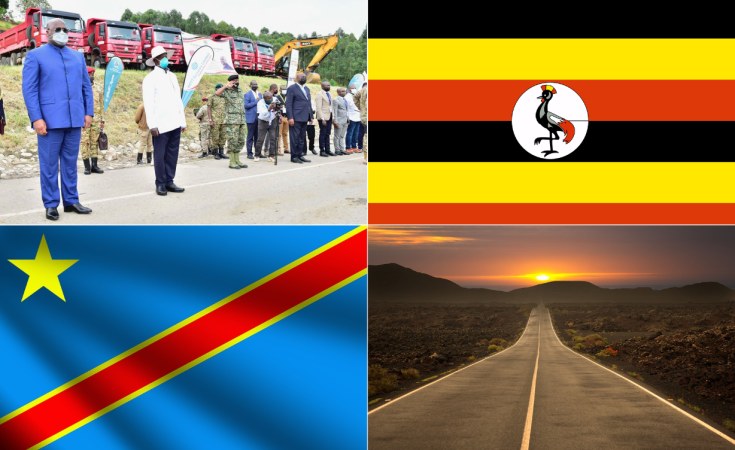 Uganda and the Democratic Republic of Congo (DRC) on Wednesday launched a 223km road project linking the two countries, with the project envisioned to boost cross border trade, improve security and connectivity between the two countries.

According Mr Bageya Waiswa, the permanent secretary in the Ministry of Works and Transport, the project was initiated with major objectives of boosting trade and commerce, addressing the issue of security, easing movement and welfare of the people, and strengthening relations between Kampala and Kinshasa.

At the ground breaking ceremony held at Mpondwe (Uganda) and Kasindi (DRC), President Museveni and his DRC counterpart Felix Tshisekedi said the infrastructure will transform the socio economic welfare of the citizens in both countries.

President Tshisekedi described the project as a reinforcement of relations between the two neighbouring countries.

"I thank him [Museveni] for this initiative because it caters for the idea of the integration of our countries. As brothers, instead of looking to build walls, it is better to build bridges," Mr Tshisekedi said.

"I am happy to be here for this project. Tshishekedi came with an open position because he does not want any suspicion with his neighbours. We are here to break ground for this project and ready for more projects," Mr Museveni said.

In a joint communique issued by the two heads of state, the infrastructure project is part of a coordinated effort between the two countries to promote trade, investment and integration among the people of East Africa.

"The two heads of state exchanged views on bilateral, regional and international issues of mutual interest. They reiterated their commitment to promoting trade, investment and common infrastructure as well as deepening integration among the people of the African continent," a State House communique states.

It added: "They stressed the importance of strengthening cooperation in different sectors, including security, infrastructure connectivity, energy, trade and investment, health, management of trans boundary water resources, petroleum and minerals with the view to promoting peace, stability and prosperity of the two countries."

President Museveni has defended Uganda funding of the project, arguing that it will boot trade between the two countries. Congo features in Uganda's top five trading partners behind the United Arab Emirates, South Sudan and Kenya.

Stakeholders say the bad road linkage had stifled trade and better roads will open up the two countries for more trade, by reducing the time of moving merchandise.

Dr Fred Muhumuza, an economist, said there is potential business in terms of commodities such as food products, gold, and manufactured goods such as textiles and plastics that Congolese traders buy from Uganda.

According to Dr Muhumuza, road transport is the most viable because of the bulk and nature of merchandise and the local traders engaged in trade between the two countries.

"It is important to have them [roads]. There are many benefits. Uganda has very many good roads up to the border, yet Congo was not interested in doing their part. The need to continue because once you cross to the other side, the roads disappear," he said.

He said security is an added benefit because it is critical for trade.

The road network is also expected to present a solution to the insecurity that has plagued eastern DRC. A number of rebel groups, including the Allied Democratic Forces (ADF), have used the thick Congo forests as a base to stabilise the region.

According to the joint communique, the two heads of state "exchanged views on the security situation in the region, especially in the eastern DRC, and stressed the need to maintain peace, security and stability in the region. In this effort, they reaffirmed their willingness to combine their effort to neutralise negative armed groups destabilising the region."

The roads to be built cover 223 kilometres. They include Mpondwe/Kasindi to Beni (80km), Beni-Butembo axis (54km) while the third (89 km) will start from Bunagana border town, through Rutshuru to Goma, the capital of the North Kivu Province in Eastern DRC.

The project will be funded by the two governments, with each contributing 20 per cent of the cost, while the contractor, Dott Services, a Ugandan Company will raise the 60 per cent. The Ugandan government already approved Shs220 billion for the project, and Mr Waiswa said they have already received Shs100 billion.

Mr Waiswa told this newspaper that the project will be undertaken in phases, with the first expected to be completed in 24 months.

"The roads are really bad, but the contractors are going to upgrade the roads to first class gravel, and will later apply asphalt to make them all-weather roads," he said.

As the countries furthers seek to strengthen their ties, President Museveni expressed his willingness to pursue more infrastructure projects.

The heads of state directed that preparations for the construction of other roads covering 294 kilometres including the Nebbi-Goli-Mahagi-Bunia road (190km), Bunia-Bogoro-Kasenyi road (55km) and Rwebisengo-Budiba-Buguma-Njiyapada road (49km) be expedited.