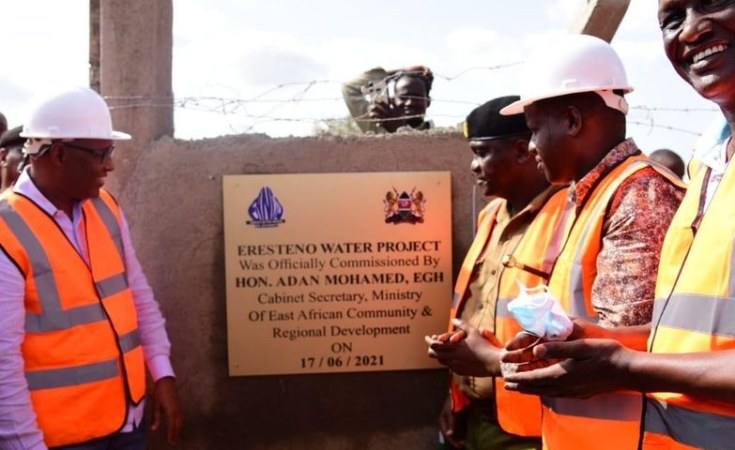 The national government has started a dam building project targeting areas prone to inter-clan conflict in the north.

According to East African Community and Regional Development Cabinet Secretary Adan Mohamed, it is expected that the dams, which will provide a constant water supply, will help foster peaceful co-existence among the ever clashing communities.

While commissioning a multimillion shillings water dam which was completed recently in Wajir North over the weekend, the CS said the national government is committed to finding a lasting solution to unending inter-clan conflicts in the eastern and north eastern regions.

He said the dams will bring together clans that live in the targeted areas and the different communities will share water that has been the main cause of clan fights.

"The national government is in the process of building what we call peace dams that are substantial in size and they are intended to really be a resource that can be shared by different communities," he said.

Mr Adan cited the Erasteno dam in Wajir North as an example of that he said will serve communities in Mandera, Wajir and neighbouring Ethiopia.

"This is about reducing inter-clan tensions and clashes over water and pasture. These mega dams have a higher capacity that can serve all the communities for a long period," he said.

According to the CS, building of water dams will minimise clan conflicts and foster peaceful coexistence.

The dams will also be used in irrigation to boost food production as an alternative livelihood for the local communities.

The Sh95 million Erasteno dam has a capacity of 300,000 cubic meters of water and will serve a population of about 20,000 people.

The government is building the dams through the Ewaso Ng'iro North Development Authority.

The authority has constructed three other similar dams in Marsabit and Mandera counties.

In areas prone to inter conflicts, water sources are developed and owned by members from the clan residing in the area. But the national government is building the peace dams in neutral areas in an effort to bring the clans together.

In Wajir North, where inter-clan conflict have been experienced for ages, residents will now easily get water from the Erasteno dam, unlike in the past when they have had to trek all the way to Ethiopia in search of the precious commodity.

Ms Abdia Hassan, a resident, welcomed the government's initiative, stating that it was a relief after a long struggle to get water.

"We have always crossed into Ethiopia to fetch water for our use and for our animals but now I am happy we have a permanent water source close to home," she said.

Locals have been going to Gadaduma in Ethiopia, about 15 kilometres from Wajir North, to fetch water.

"We shall now start irrigating our farms around the dam for our own benefit and for our good health," he said.

The government is building another dam in Galmagala in Fafi Constituency and also in Isiolo, Marsabit and Mandera counties.

He said the dams will help in storing during rain seasons when the targeted areas experience floods.

"A lot of water goes to waste during the rainy seasons in this region but now with the dams, we shall be able to collect more than enough to serve the population during the dry seasons," the CS said.

According to Mr Ndalana, the government can only provide such projects in a peaceful environment. He urged local communities in the region to be at the forefront in championing for peace.