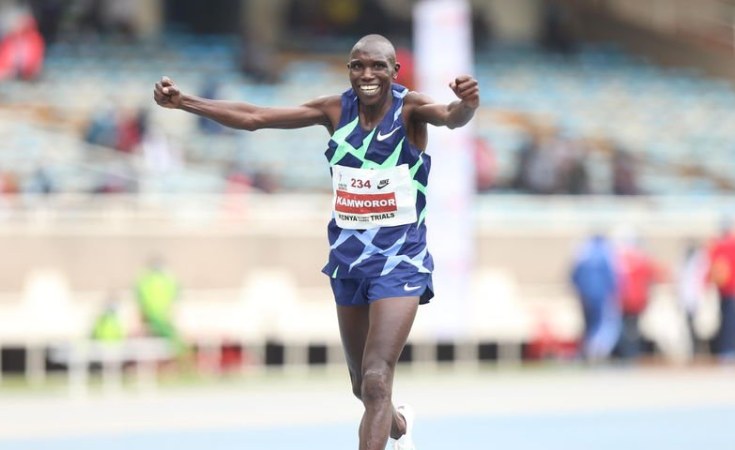 During the just concluded national Olympics trials at Moi International Sports Centre, Kasarani, three athletes came out of the woods to book their slots in Team Kenya for Tokyo Summer Games.

Geoffrey Kamworor bagged victory in the 10,000m race, a major comeback after he was involved in an accident along the Eldoret-Kaptagat highway last year which ruled him out of the World Half Marathon Championships, where he was to defend his title.

He was hit by a motorcycle during his routine morning run and sustained a fracture in his right tibia forcing him to undergo surgery at St Lukes Hospital in Eldoret by Dr Victor Bargoria.

Kamworor beat a strong team to win the race in 27:01:06 ahead of his training mate Rodgers Kwemoi who timed 27:05:51 with Weldon Kirui finishing third.

The Kaptagat-based athlete, who has been christened the man of all surfaces due to his exemplary performances in cross country, road races and track events, was pleased to win the race which was competitive.

"I'm happy to be back because I have gone through a lot of challenges in the past season. I missed a gold medal in the Olympic Games and the win here is just a start as I go for gold medal in Tokyo," said Kamworor after the race. "I still need to finalise my training because the race is competitive but I also need to work hard and see if I can bring the medal Kenya has not won since 1968."

In 2019, Charles Simotwo picked a knee injury that forced him to undergo a surgery at St Lukes hospital by the same doctor.

Simotwo won the 1,500m race that saw World Champion in the distance Timothy Cheruiyot emerge fourth, missing a slot in the Kenyan team.

An elated Simotwo is grateful to have made the team after recovering from an injury that almost ended his career.

"I managed to undergo a successful surgery in 2019 at St Lukes Hospital which went on well and last season I was up and running again. That was my build up for the trials and I'm happy I will be representing my country in the Olympic Games," said Simotwo.

The 2017 World Cross Country champion Irene Cheptai was looking forward to a great comeback after maternity break but that was not to be after the coronavirus pandemic struck causing suspension of all sporting events across the world.

Cheptai - who trains in Iten, Elgeyo Marakwet County - told Nation Sport that she had trained well for the race because she is yearning to represent the country once again in a global event.

"My last event to represent Kenya was the 2017 World Championships where I came in seventh position before going for maternity leave. My comeback has been challenging with injuries along the way but I managed to make the team after good preparations. I'm looking forward to representing my country well," said Cheptai.