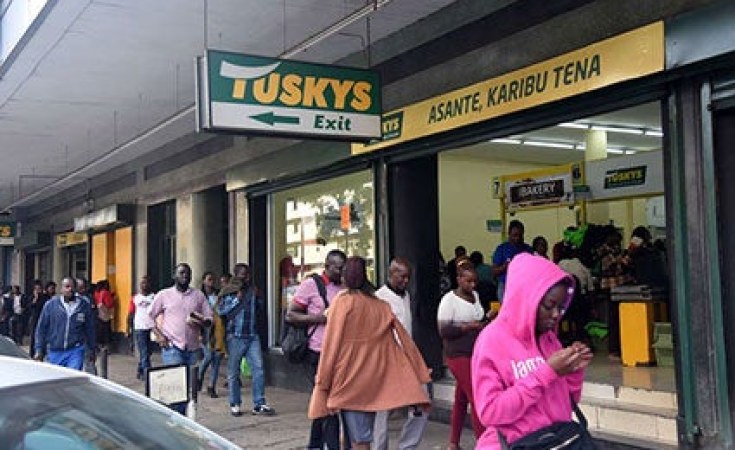 When five former workers tried to attach Tuskys Supermarkets' assets last year to recover a Sh3.9 million court award, the retailer called a ceasefire and offered to pay the amount in instalments.

But the cheques bounced, and the irked former workers opted to proceed with attaching Tuskys' assets to get their dues.

In a last-ditch effort to save itself, Tuskys asked labour relations judge James Rika to suspend the planned auctions, arguing that the retailer's assets are protected by orders issued in an insolvency case filed at the commercial division of the High Court.

In what could deal a massive recovery setback to Tuskys, the five former workers have now been allowed to sell some of the retailer's assets to recover their terminal benefits totalling close to Sh4 million.

While Sh3.9 million was not an amount to threaten Tuskys a few years ago, the retailer is undergoing tough times that could see it collapse.

Poor management and tough economic times have ensured that Tuskys can barely define itself as a supermarket chain.

Most of the 60 branches it had across East Africa have been closed on account of rent default, leaving only about five operational branches.

But Justice Rika ruled that assets the five former workers are looking to attach are not protected by the insolvency petition against Tuskys that is currently before the commercial and admiralty division of the High Court.

When Mr Chege, Mr Andrew, Mr Mutegi, Mr Thuvu and Mr Kegode sued Tuskys at the labour relations division of the High Court for unfair dismissal in 2016, the retailer was represented by Kanchory & Company Advocates.

But after the five former workers won and sought to attach some of Tuskys assets to recover the Sh3.9 million court award, O&M Advocates filed an application before the labour relations court to protect the retailer's assets.

O&M Advocates is representing Tuskys in the insolvency petition, where dozens of creditors are looking to have the retailer liquidated and have whatever is left of the shell directed to offsetting part of the nearly Sh8 billion owed.

Tuskys told Justice Rika that allowing an auction could deal a deathblow to the retailer, and that such action could scuttle the plan.

Justice Rika found that there is no evidence that O&M had followed the usual court procedure in taking over the employment case from Kanchory & Company Advocates.

The judge also held that the assets the former workers have been allowed to sell are not affected by the insolvency case against Tuskys.

The judge delivered his decision after the five former workers revealed that Tuskys in October, last year, offered staggered payment to settle the debt.

But the cheques bounced, an indication that there was no money in the bank accounts Tuskys was looking to get money from.

Under Kenyan law, it is a criminal offence to issue a bouncing cheque, but it is not yet clear whether Tuskys will be cited for its move.

"Judgment as stated by both parties was delivered in favour of the claimants. Execution commenced and certain assets of Tusker Mattresses Limited were attached. The parties agreed on the mode of payment of the decrial sum, and Tusker Mattresses issued cheques, which were dishonoured," Justice Rika said.

"The assets have already been attached, earmarked for sale, to satisfy decree, following a separate judicial process, and are to be dealt with to the conclusion of the existing judicial process. The assets are under the jurisdiction of the employment and labour relations court. They have already been designated for sale. There are orders attaching those assets, issued by the employment and labour relations court. The assets are not available for redistribution at any other forum," the judge added.

The five former workers resigned from Tuskys in 2016, accusing the retailer of creating a hostile working environment.

Tuskys argued that the workers opted to resign when they were asked to attend training aimed at improving their output.

The retailer added that it placed an offer to settle the workers' terminal dues when they resigned. The workers allegedly declined the offer and sued.

Justice Stephen Radido heard the case and dismissed the workers' claims that being told to attend training created a hostile working environment.

The judge, however, said that the contract the workers had provided for terminal benefits hence ordered Tuskys to honour that part of the contract.

The terminal dues of Sh3.9 million included one month's salary in lieu of notice, and gratuity of 20 days' pay for every year worked.

The retailer was hoping to get Sh2 billion funding from a Mauritian investor last year and which was expected to inject working capital into the collapsing operations.

But the deal failed to materialise, and insiders have previously told the Nation that Tuskys was unable to get all creditors to pause on debt claims as was required in the contract for the Sh2 billion funding.