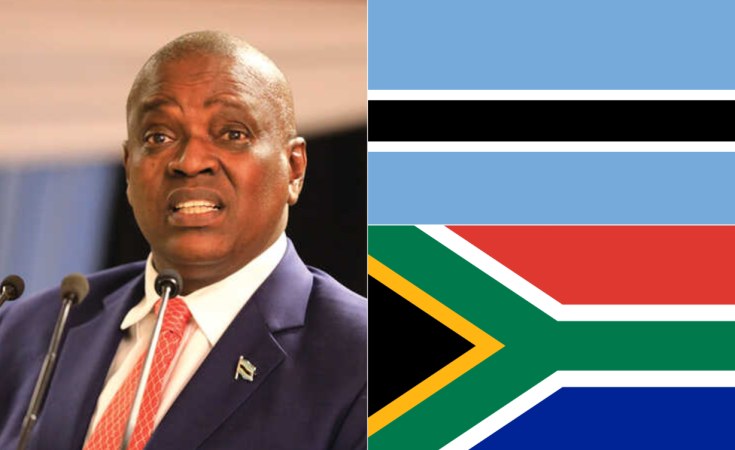 The story of the Umbrella for Democratic Change (UDC) has had a lot of twists and turns since its founding. Key to this could be summed up by the saying 'so near yet so far' for the UDC like I have said in the recent past. It appears from what obtains in the UDC at this particular point could, unless a serious paradigm shift is realised, be the case of history repeating itself. Given the many facets of the UDC story, such could be looked at from different angles. In this conversation, I look at the story from the political feud between the most senior leaders of the multi-party formation.

The political feud between the President of the UDC Advocate Duma Boko and his Deputy Hon Dumelang Saleshando is in the political storm plummeting the multi-party formation. Feuds of this nature are, or have been witnessed in political parties in power and those in opposition. We have witnessed such in the ruling Botswana Democratic Party (BDP) between the former President Ian Khama and his successor President M.E.K. Masisi before the former jumped ship to form Botswana Patriotic Front (BPF). Since Khama had served his terms in the party and country, it is widely believed he wanted to rule from the grave to protect his interests whatever they are. We have also witnessed it in South Africa between Jacob Zuma and Cyril Ramaphosa before the former was ousted by the latter; currently in Kenya between Uhuru Kenyatta and William Ruto. How can I forget Robert Mugabe and E.D. Mnangagwa. While causes of these feuds vary, it is safe to say the end result is for the victor in the skirmish to assume political power.

Flowing from the above therefore, it should reason that the feud between Boko and Saleshando is all about gaining political power to preside over the UDC. As an important player in Botswana body politic let alone in the UDC, Saleshando should harbour the ambition of leading the UDC first and Botswana second. To do both, he should first dispense with Boko before setting his eyes on the ultimate goal of any opposition politician. And that is becoming the President of the Republic. Boko would not go down without a fight because while he has failed before to become the President of the Republic, his political story will not be complete without the ultimate goal referred to above. A question should arise as to how and if Saleshando will succeed in dislodging Boko or whether the latter will weather the storm. Context is always necessary in terms of evaluating the prevailing political dynamics in Boko's and Saleshando's respective political parties together with the UDC itself. The context should give one some fairer idea of how the above question could be answered.

I will admit it is a tough call to make because one does not know the level of support the two enjoy within the UDC. There has not been a contest between them at the UDC to gauge their levels of support because they assumed their positions consequent to a 'gentlemen's agreement' of sort. In their respective parties, it is not clear if they command reasonable support to sway or influence the UDC towards the intended objective. Boko looks largely out of favour from some of his Comrades who supported him before because they argue he has failed to run the Botswana National Front (BNF) in strict compliance with its Constitution particularly with respect to convening the National Executive Committee meetings. These Comrades view him as an autocratic leader who runs the party with an iron fist. As the President of the UDC, he is also accused of the same autocratic tendencies. The UDC's failure to win the last two general elections and the dismal failure of the 2019 general election petitions are put squarely on Boko's shoulders. His supporters will credit him for reviving the BNF when he became its President. While this could be true, its status and fortunes have since significantly dwindled. It has struggled to win a fairer number of parliamentary seats in the past two general elections. In 2014, BNF candidates won less than ten parliamentary seats while in 2019 the number went further down. Levels of dissenting voices have become louder by each passing day.

It is no different at the UDC with the dissenting voices equally louder than one would expect. I have previously criticised Boko for the manner he handled the Botswana Movement for Democracy (BMD) case following the events pre and post the ill-fated Bobonong congress. These events have since led to the BMD leaving the UDC and the subsequent founding of the Alliance for Progressives. If the BMD matter was proactively handled politically than it was, the polarisation in opposition politics may have been different than it is on the understanding that the UDC requires all opposition parties to be under its umbrella. Maybe Boko thought the entrance of Saleshando post BMD departure would pluck the gap left by the BMD and hence the gambling with its exit. The current feud tells us something different. It is fair to say the UDC was a competitive party in those last two elections notwithstanding it lost primarily on its own unforced errors. If these arguments hold water as I verily believe they do, Boko should be on the back foot.

Saleshando's Botswana Congress Party (BCP) is regarded as a fairly stable party owing to its observance of participatory democracy. This does not mean there are no dissenting voices therein. Recent reports suggest there are differences in the party as to whether party leadership elections should take place or some compromise of some sort reached. This is still a developing story. If it turns to be true, it will be hypocrisy of the highest order. BCP cannot call for elections in the UDC when it finds a convenient way to avoid it. Boko's supporters look hell bent to avoid an elective congress under very unconvincing reasons that such could further polarise the UDC. Democracy is all about providing party members a platform to elect their leaders and anything short of this spells disaster in the form of instability. It is fair to suggest there are some in the BNF who concur with the BCP that such elective congress be called. As Leader of the Opposition in the National Assembly, Saleshando has kept the opposition flame in the House burning very brightly by pinning the BDP against the wall and also exposing its shortcomings. It has been reported some BDP MPs acknowledge the impact of Saleshando though in hushed tones from the way UDC has exposed it for what it is through Motions and Statements amongst others. Some of these BDP MPs are reported to be thinking of banning live parliamentary proceedings. With the above context, Saleshando appears to hold the edge over Boko in terms of dislodging him from the pedestal. Can he dislodge him? Yes he can.

The question should be how he can do it. I will not be oblivious to the point I made above with respect to how much support or not Boko and Saleshando command firstly in their respective parties and secondly in the overall UDC. The support in the overall UDC is important for with it, convergence of minds to migrate the UDC from where it becomes easy and possibly achievable. Boko may not be in favour of an elective UDC congress because he may be fearful that he will lose while Saleshando may be pushing for it because he feels he could just pull it off. One will not conclusively know until an elective congress is held. One important point to be made is that Boko and Saleshando know very well that they need each to garner the 29 constituencies in order to dislodge the BDP. For this to happen, all opposition parties must endorse and support a single opposition candidate in every constituency and ward. At the moment and barring some miracle, it looks a bridge too far. Other opposition parties not under the umbrella look not convinced to share the umbrella shade because the UDC under Boko is falling apart like a house of cards. For Saleshando to dislodge, he must get support from those members of the BNF who believe in a democratised UDC; create conducive conditions to attract AP and BPF; engage to persuade the civil society including trade unions; appeal to the middle class. He will have to demonstrate to these structures that their support will not be in vain.

In the context of above, it is fair to suggest the political feud between Boko and Saleshando is nothing extraordinary in politics but all about political power politicians ever so desire and cherish. In the process, the bigger picture of making the UDC an alternative government to the BDP suffers big time as it has become its 'legacy' in recent times. The UDC cannot survive if it continues to circumvent and trample upon the basic principle of democracy which is inner party democracy. But one thing is certain from where I stand: history will judge both Boko and Saleshando, both gifted and capable individuals in their own right and in their generation, very harshly for having failed to make the UDC what it should be. Martin Luther King said 'People fail to get along because they fear each other; they fear each other because they don't know each other; they fear each other because they have not communicated with each other' while Robert K. Greenleaf said 'The most serious failure of leadership is the failure to foresee.' I am prepared to be persuaded otherwise as always. Judge for Yourself!

On a sad note, let me pass my condolences to the entire family of Rre Johan 'General' Modise who was laid to rest on Thursday. He has run his race to the fullest and may MHSRIP.

We are still not out of the woods yet. Covid-19 is still ravaging the world. Let us all protect ourselves by adhering to all Covid-19 protocols.

Next Story
Tagged:
Copyright © 2021 The Patriot. All rights reserved. Distributed by AllAfrica Global Media (allAfrica.com). To contact the copyright holder directly for corrections — or for permission to republish or make other authorized use of this material, click here.