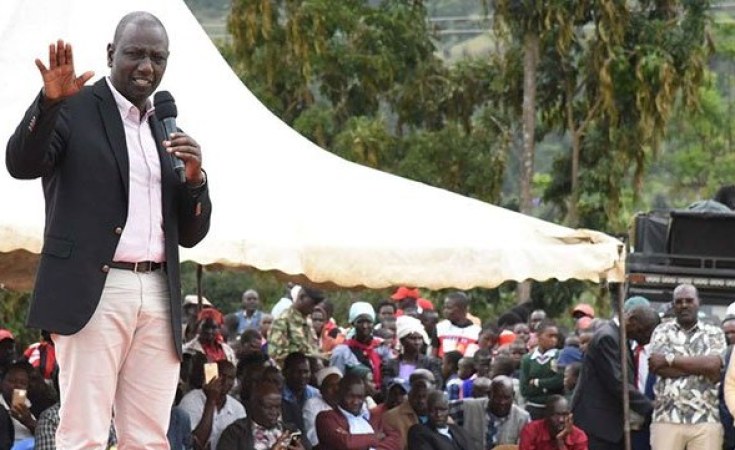 A split in the vote-rich Mt Kenya region between the dominant west and their east counterparts has rocked Deputy President William Ruto's camp in its search for a running mate in the 2022 State House calculation.

And like the feud in President Uhuru Kenyatta's camp, those from Mt Kenya east in the DP's camp say while they agree that Mt Kenya has the best chance to produce the DP's running mate, that person should come from their side of the mountain, saying they had supported the west counterparts for far too long.

The Nation has learnt that Meru Senator Mithika Linturi, his Murang'a counterpart Irungu Kang'ata, and Prof Kithure Kindiki of Tharaka Nithi, as well as MPs Moses Kuria (Gatundu South) and Rigathi Gachagua (Mathira) are said to be eyeing the position.

Former Agriculture Cabinet Secretary Mwangi Kiunjuri, leader of The Service Party, has also set his eyes on it.

Yesterday, Senator Linturi declared that Mt Kenya east is consolidating the region to have a common voice so as to increase their chances of one of them being picked as the DP's running mate.

"We have had a vice-president and presidents coming from that area because Mwai Kibaki held the two positions. The current President comes from Kiambu; we cannot go back there again. This greed must stop. This time round, we are saying as Mt Kenya east people, it is our time," said Senator Linturi, a key member of the DP's camp.

The two-term senator said he was the best man for the job.

"Seniority is key. I have never lost an election; I have been elected a number of times. I have been firm and consistent. I work closely with Prof Kindiki Kithure of Tharaka Nithi because I lead the entire team of the entire Mount Kenya east and he is a member and he does not miss the meetings. I'm also a member of the team which is in charge of planning DP Ruto's activities in the vote-rich Mount Kenya," he added.

Already, Mt Kenya has been flipped into a battlefield region that could swing the 2022 State House bid of any serious presidential contender amid the political uncertainty rocking the landscape.

With President Kenyatta leaving office in 2022, the region has not fronted any 'serious' candidate as in the past to succeed the Head of State and is proving to be a crucial region for DP Ruto and former Prime Minister Raila Odinga.

From Mt Kenya west, Mr Kuria has been proposed as the man to deputise Dr Ruto, with his backers citing the recent win by the People's Empowerment Party (PEP) in the Juja by-election over a Jubilee candidate.

At the same time, words have it that Mr Gachagua, who has been hosting the DP's allies, has embarked on aggressive groundwork in Kiambaa for the sake of United Democratic Alliance (UDA) candidate John Njuguna Wanjiku to triumph in anticipation of increasing his profile in the camp and be picked as a running mate.

Senator Kang'ata, who was fired from the position of majority whip in the Senate, on the other hand, seems to be building his political clout with his eyes on the country's second-in-command position if Ruto-linked UDA forms the next government.

The Murang'a senator's recent trip to Seattle, in the US northwestern state of Washington, to open a UDA liaison office was aimed at bolstering his image in the DP's camp. He also implored Kenyans in the diaspora to help preach the gospel of the Hustler Nation, register more members and support the manifesto of the team.

Mr Kang'ata, who was cagey about whether he is eyeing the running mate position, insisted that the DP's post in Dr Ruto's camp should go to Mt Kenya.

"Yes indeed, Mt Kenya region wants that slot. We have eight million votes and we strongly believe we shall put those entire votes into Ruto's basket. We know our boss is magnanimous and he will repay us adequately. I'm, personally, not fronting anyone," Mr Kang'ata told the Nation.

Mr Gachagua and his Kiharu counterpart Ndindi Nyoro told the Nation that they were not concerned about who will be given which positions, arguing that the region has produced three Heads of State but there is nothing they can show for it.

"What we are discussing with Ruto, our preferred candidate, is economic programmes to revive the economy of the region and by extension the country," Mr Gachagua said.

"Guaranteed minimum returns for our cash crops. Once we agree with him on these interventions, we will discuss what positions our people can occupy to help him realise that dream."

Mr Nyoro alleged that the current implosions in Mt Kenya are orchestrated by the 'deep state' with the aim of blocking the DP from ascending to power.

"There is nothing like Mt Kenya west or east. This is the deep state trying to divide the Mt Kenya region. They have been sponsoring everyone, like what happened to (National Assembly Speaker) Justin Muturi," he said.

"Uhuru wants that by the time we reach the elections, we are confused. He thinks the community will run to him because he is above these small kingpins he is creating."

Mr Nyoro, a firebrand critic of the President, said those eyeing Dr Ruto's running mate position must work hard to earn the position, arguing that it will not be given to anyone.

"DP will need a running mate but our focus now is not that. It will have its own time. We know the running mate will come from the Mt Kenya region. The issue of positions will come but currently, we are refining our economic blueprints," he said.

"There is no politician without ambitions. It is their democratic right to hope and wish but more importantly, work hard to be identified that you are such kind of personality but you cannot say that on Twitter or from the comfort of your home."

Options in other regions

In the Coast region, former Mombasa Senator Hassan Omar told the Nation that the region rallies behind the DP not with the expectation of getting the position of running mate but with hopes of implementing their economic blueprints.

The DP was in Kilifi in May for the Coast Economic Regeneration Forum, which brought together Mombasa, Taita Taveta, Kwale, Kilifi, Lamu, and Tana River counties to outline the region's economic plan with emphasis on tourism, the maritime economy and land ownership challenges.

"On our end, we are deliberate not to focus on positions but focus on issues and our agenda. Conversation for us has shifted. It is about rejuvenating our economy and our respective areas of political responsibilities. The agenda on who will take which position is an ethnic agenda," Mr Omar said.

For western Kenya, it seems, the possibility of Amani National Congress leader Musalia Mudavadi running for President makes it unattractive for the DP to pick a running mate from there, especially given that Mr Odinga, the ODM leader, also holds sway over a considerable section of the vote-rich region.

Mumias East MP Benjamin Washiali, who was last year sacked from his position as National Assembly majority whip for associating with the DP, said the region will settle for other seats away from the running mate post in the DP's 2022 government.

"Given the kind of support the DP has, he will definitely succeed President Kenyatta. I do not think that we will reach a point where a few of us will force him to pick one of us to deputise him," he said.

"Again, it is a game of numbers and if we are not counting in terms of numbers, how will we push for the running mate position? It will be unfair."